Archive:Marriages and births in Poland

Decrease in the number of marriages and live births in Poland

Marriage and family are strongly embedded in the value system of contemporary Poles. This article presents brief information about trends in the concluding and dissolving of marriages as well as births over the past 25 years, i.e. from the moment of economic and social transformation in 1989. The first half of the 90s was the breakthrough period for the observed demographic trends. The changes point to an ongoing transformation in the behaviour of young persons, who while entering adulthood and planning a future first invest in themselves - in education and work - and then in the family and its enlargement.

The article also provides information about the structure of the Polish population by de facto marital status. 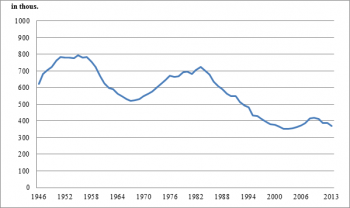 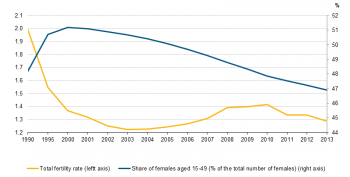 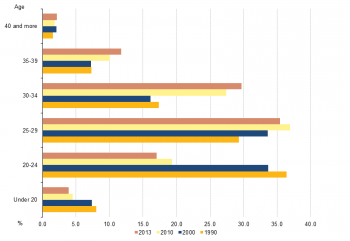 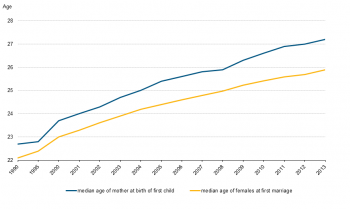 Figure 7: Median age of females at first marriage and median age of mother at birth of first child in Poland 1990 – 2013
Source: CSO of Poland 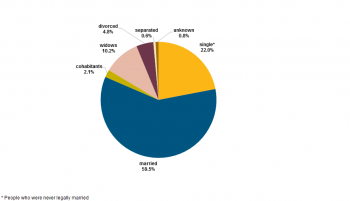 Decrease in the number of marriages in Poland

The changes presented are examples of the transformations taking place in the behaviour of young people, who when planning a future firstly try to invest in themselves – in education and work – and then in the family.

Over the past few decades in Poland, more than 200 thousand marriages have been dissolved every year - approx. 30 % as a result of divorce, and the remaining almost 70 % by death. In the 1990s and at the beginning of this century, the proportions were 20% to 80%.

On average, divorced spouses have lived together for approx. 14 years and this period is getting slightly longer. Year by year spouses become a bit older when divorcing: in 2013 men were on average 40-41 years at the time of divorce, women were more than 2 years younger.

Constantly in over 2/3 of all cases, it was women who filed for a divorce. The divorce rate due to the woman’s fault was over 3 % (18 % of all divorces were due to the man's fault) but in the majority of cases (over 74 %) the fault was not adjudicated. The most common causes of divorces which spouses declare is incompatibility of character (over 1/3 of all divorces), the other causes are infidelity or permanent emotional relationship with another person (1/4 divorces) and alcoholism (19 %).

When deciding on custody of under-age children (aged below 18) remaining from the dissolved marriage, the court most often (60 % of cases in 2013) grants custody solely to the mother and solely to the father only in approx. 5 % of cases. In 34 % of cases joint custody is granted.

Decrease in number of live births

Currently, the number of births is almost half the size recorded in the last demographic boom i.e. in the first half of the 1980s (the crude rate was over 19‰).

Increase of the age of women at childbirth

The observed changes are another result of a choice, which is often made by young generations of Poles, to reach a certain level of education and economic stability firstly and then (about the age of 30) to start and expand a family.

Over 20 % of births in Poland are births outside marriage

Female fertility is at a certain level influenced by the number of new marriages. Now days about 80 % of children are born into families created by legal marriages, while more than half of children of married couples are born within the first three years of marriage. Despite the periodic increase in the number of new marriages (in 1997-2000 and 2005-2008), the percentage of extra-marital births has been increasing over recent years. In 2000 the extra-marital birth share was about 12 % while it was above 23 % in 2013.

Structure of population in Poland by the facto marital status

Poland is a country with a strong family tradition which is reflected in the structure of the population by de facto marital status.[1] In 2011 among the population aged 20 and more (30.3 million people) nearly 60 % remained legally married; among men, this percentage was over 62 %, and among women slightly less - almost 57 %. In addition, more than 2 % of the population 20+ declared to be in informal relationships (consensual unions[2]).

The next largest group by actual marital status are single men and women who have never married, who together accounted for 22 % of the population aged at least 20. There is clearly a variation by sex, i.e. the percentage of singles among women was less than 18 %, and among men up to 27 %. Divorced persons make up almost 5 % of the population aged 20 and more, and those separated represent less than 1 %.

The greatest diversity by sex occurs among widowed persons, who in 2011 accounted for just over 10 % of the population considered - widowers were just over 3 % of men, while widows accounted for over 16 % of women. This divergence deepens among older age groups - the result is that older men most often remain married for life, and older women are widows.

Census results in 2011 in terms of de facto marital status revealed that the actual population structure was similar to that in the census from 2002 . Additionally, the changes observed over the years were similar to those in the legal marital status. Compared with 2002, the number and proportion of single men/women (by more than 2 percentage points) and divorced persons (by more than 1 p.p.) increased. The number of persons declaring they remained in a legal marriage increased, but their share in the population aged 20 and more decreased. Similarly, the number of widows increased, while the percentage remained at a level similar to that recorded in 2002.

The differences between the two categories of marital status are most significant for those age groups in which an increase in the proportion of persons cohabiting is observed, i.e. for single women and men aged below 40 and 40 and 50-year-old divorced persons.

The study of the population in consensual unions in terms of their legal marital status shows that the major part - over 61 % of relationships - are persons of legal marital status single men / women. The second group are divorced persons (nearly 29 % of cohabitants), and persons being legally married and widowed represent 5 % of the total number of partners.

This is undoubtedly related to the age of cohabiting persons. Among persons under 40, partnerships consist mainly of single people. Among those aged 20, they represent 95 %, but among those aged 30, the second most important group concerns those who are divorced (26 %). Divorced persons constitute also more than half of the 40- and 50-year-old female partners and 40- 50- and 60-year-old male partners. Among cohabiting couples, the older the age group, the more widows/widowers begin to dominate, particularly among women.

An analysis of the results of the censuses conducted in Poland over several years show that changes in the population aged 20 and more by marital status are not rapid. Slowly but steadily, the share of married persons is decreasing - particularly among men, while the proportion of divorced persons is growing strongly, though - from the point of view of legal marital status - they are still the least numerous group. The smallest changes concern widowed persons - their percentage in the total population aged 20 and more remains practically unchanged. On the other hand, in the case of single men and women, their share varies dependent on the baby booms and population declines. In the case of de facto marital status, the number of consensual unions increases.