Archive:Marriages and births in Bulgaria

Marriages, divorces and births in Bulgaria at the beginning of the 21st century

In Bulgaria as in many of the EU Member States, the family as a legal union has, for many people, lost its meaning. The number of marriages is declining, while the number of consensual unions is growing. As a result, the birth of a first child often precedes marriage. The mean age at marriage has increased both for men and women. There is a considerable growth in the number of extra-marital births. Fertility is also changing. The mean age at first birth has increased, which leads to a shortening of the period in which a subsequent birth is possible. The highest crude birth rates over the last 40 years were registered in the period 1974 - 1977, and the lowest in 1997. There was an increase of 1.5 % in the number of live births in 2014 compared with the previous year.

On the other hand, in contrast to many European countries, the number of divorces in Bulgaria during the last 15 years has not increased. 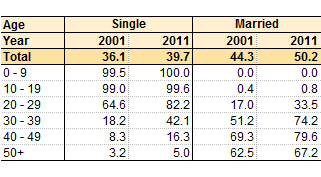 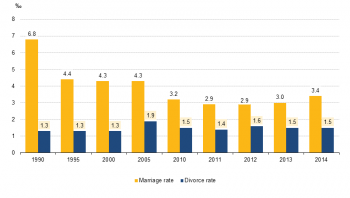 Figure 6: Marital and extra-marital births in the period 2000 - 2014, Bulgaria
Source: NSI of Bulgaria

In addition to the decrease in the number of marriages, a steady tendency of an increase in the mean age at marriage is observed both for men and women. In 2000 the mean age at marriage for men was 30.0 compared with 32.7 in 2014. The respective values for women were 26.4 and 29.4. Stated another way, people now marry 3 years later than 14 years ago.

Since the end of the 1960s fertility in Bulgaria has decreased continuously. As a result of the measures introduced in the early 70s, aiming at an increase in fertility, a slight increase was registered in the period 1974 - 1977, but the effect was short-lived. From then a steady decrease began, with the lowest number of live born children registered in the whole demographic history of the country in 1997 (64 125, or 7.7 ‰). The number of live births in 2014 was 67 585. Compared with the previous year, there was an increase of 1 007 children or 1.5 %.

Changes in the age structure of the fertile contingent contribute considerably to the decrease of the crude birth rate. It has to be taken into consideration that nearly 90 % of births are among women aged 15 to 34 years. They numbered 818 thousand in 2014, a decrease of 2.6 % compared with 2013 and of 28.6 % compared with 2000. The number of women in the this age group decreased mainly due to lower numbers of women entering fertile age and emigration processes.

Total fertility rate (TFR) is one of the basic indicators characterising fertility. In the period 2000 - 2014 it remained almost unchanged, with the highest value registered in 2009 - 1.6 children per woman. The average number of live born children per women in 2014 was 1.5, compared with 1.3 in 2000.

Comparing the mean age of women at first birth and at first marriage, a tendency is observed for the birth of the first child to precede marriage.