Archive:Marriage and birth statistics - new ways of living together in the EU

This article on marriage and birth statistics is part of a pilot project implemented by Eurostat together with the Member States. The aim of the pilot project is to better reply to user's needs by complementing Eurostat articles in Statistics Explained containing information on the EU with more detailed information on a national level. Articles from the participating Member States are available in the corresponding national languages as well as in English and they form, together with the Eurostat article, an online publication.

The way people live together in the EU has significantly changed in the last decades. Marriage had long been considered as virtually the only way to form a family. This has changed and alternatives to marriage, like consensual unions and registered partnerships, have become more widespread. At the same time, births outside marriage have become more and more frequent.

To describe the current situation, this article presents statistics on marriages, divorces, consensual unions and births in the European Union. 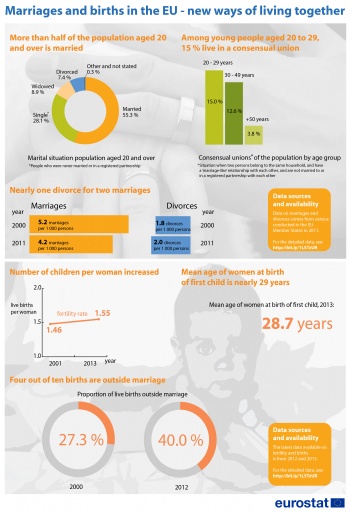 Infographic: Marriages and births in the EU 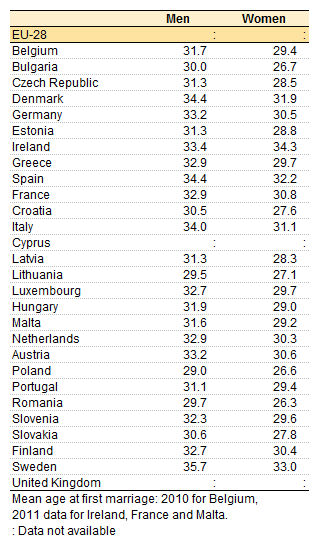 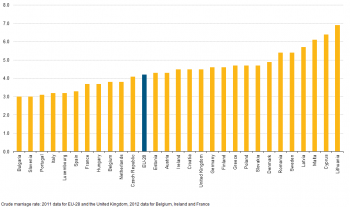 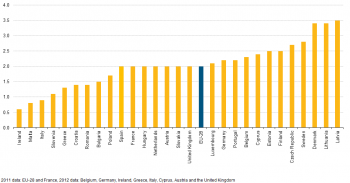 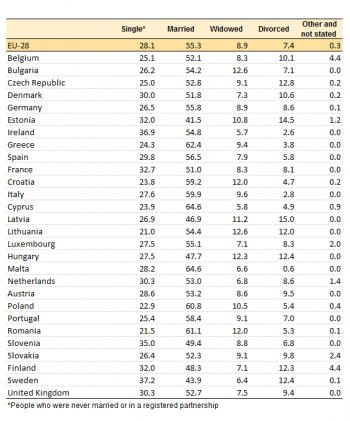 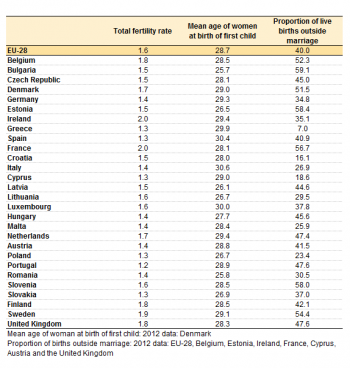 Nearly one divorce for two marriages in the EU-28

In order to further analyse the new ways of living together and to complement the legal aspect, statistics on consensual unions[3], which take into account the situation when two persons belong to the same household, and have a ‘marriage-like’ relationship with each other, and are not married to or in a registered partnership with each other, can also be analysed. According to the last population census, 8.8 % of the EU-28 population aged 20 and over lived in a consensual union in 2011. The shares varied considerably between Member States with the highest proportions observed in Sweden (18.3 %), Estonia (16.4 %), France (14.3 %), Denmark and Finland (both 14.0 %), and the lowest in Greece (1.7 %), Poland (2.1 %), Malta (2.5 %) and Croatia (2.9 %).

In all Member States for which data is available, the age at first marriage for both men and women has increased by approximately 1 to 4 years between 2000 and 2013. There is a large proportion of the population who get married after the age of 30.

Fertility rates still below the replacement level in the EU-28

In parallel with the change in the way people live together, changes have also been observed regarding births.

Comparing 2013 with 2000 among the Member States for which data are available for both years, increases in the mean age of the mother at birth of first child of around 3 years are observed in the Czech Republic, Estonia, Cyprus, Lithuania, Hungary and Slovakia, while there was a decrease of almost one year in the United Kingdom.

The proportion of live births outside marriage in the EU-28 has increased significantly in the last decade, signalling new patterns of family formation alongside the more traditional pattern where children were born within marriage. In 2012, 40.0 % of live births in the EU-28 were outside marriage, which is 12.7 percentage points higher than the share of 27.3 % in 2000.

Fertility statistics are also collected in relation to the number of births by the rank of the child (first, second, third child and so on). A series of fertility indicators are produced from the information collected, including the total fertility rate and fertility rates according to the mother’s age, the mean age of women at childbirth, the crude birth rate etc.

Most EU countries conduct a population census every 10 years. Compared to surveys and annual demographic data, the census results are very precise and can give information about the population at the national, regional and municipal levels. The census results of all EU and EFTA countries are accessible via the Eurostat Census Hub.

The EU’s social policy does not include a specific strand for family issues. Policymaking in this area remains the exclusive responsibility of EU Member States, reflecting different family structures, historical developments, social attitudes and traditions from one Member State to another. Nevertheless, policymakers may well evaluate fertility statistics as a background for family policymaking. Furthermore, a number of common demographic themes are apparent across the whole of the EU, such as a reduction in the average number of children being born per woman and the increasing mean age of mothers at childbirth.

The family is a changing concept: what it means to be a member of a family and the expectations people have of family relationships vary with time and space, making it difficult to find a universally agreed and applied definition. Legal alternatives to marriage, like registered partnerships, have become more widespread and national legislation has developed to confer more rights to unmarried and same sex couples. Alongside these new legal forms, other forms of non-marital relationships have appeared, making it more difficult for statisticians to collect data within this domain that can be compared across countries.

Similar articles and information on marriages and births