This article presents analysis of the significance of the larger farms (classified in terms of area) in the structure of the agricultural holdings within the various European Union (EU) Member States, as well as Norway and Switzerland. It is based on the Farm structure survey (FSS) data from 2007.

The utilised agricultural area (UAA) refers to the land used for farming; it includes arable land, permanent grassland, permanent crops and also kitchen gardens. The distribution of the UAA between large and small farms varies among countries but in most otf them a small number of farms occupy a high percentage of the agricultural area.

Figure 1: Distribution of UAA by UAA size of the farm, 2007 Eurostat (ef_ov_kvaa) 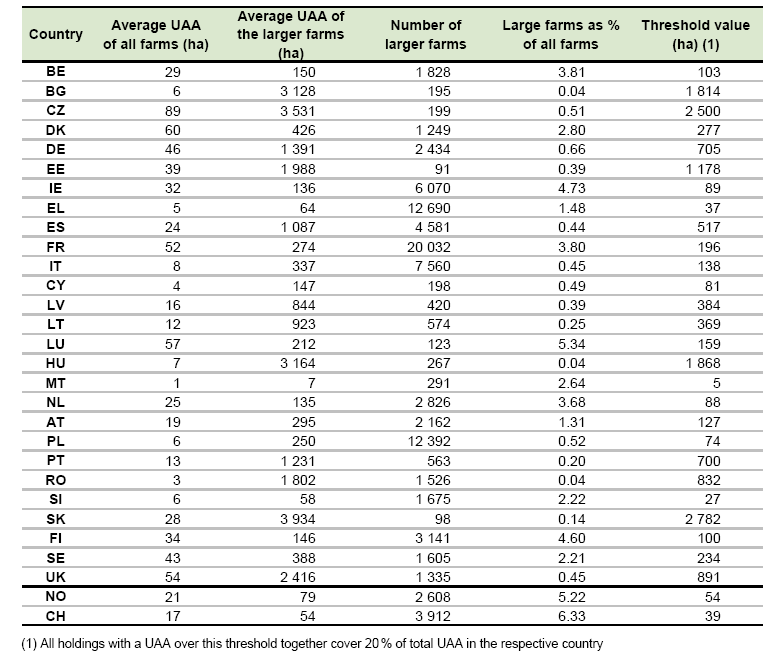 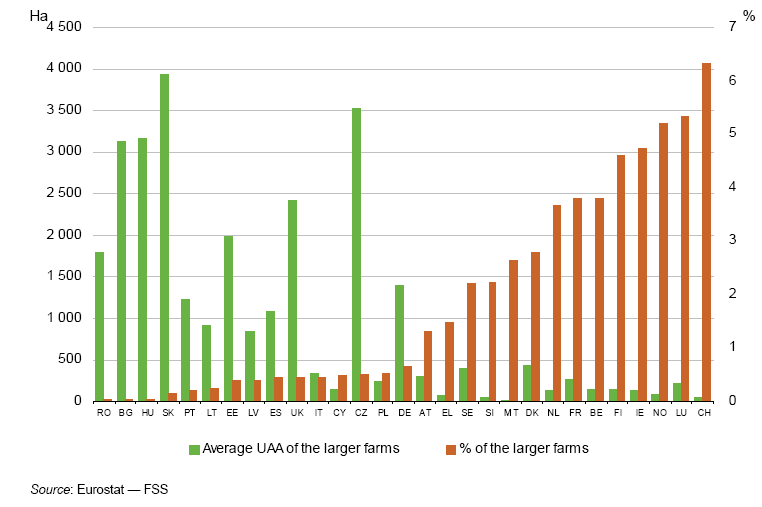 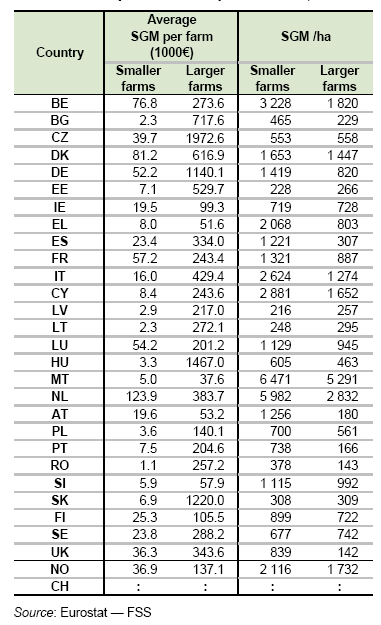 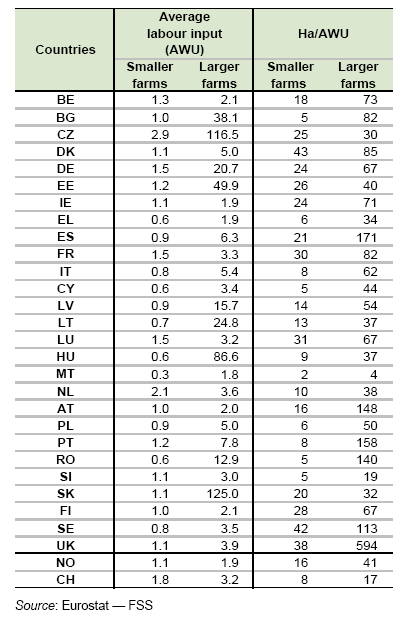 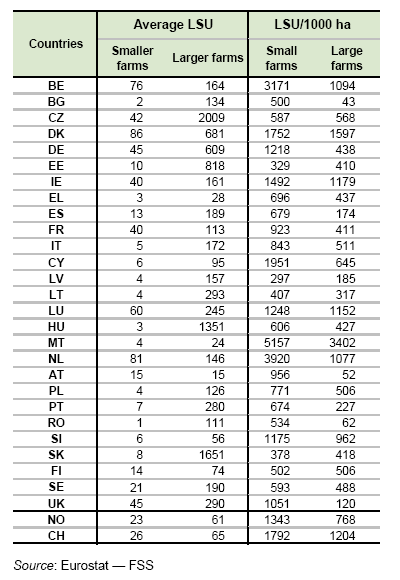 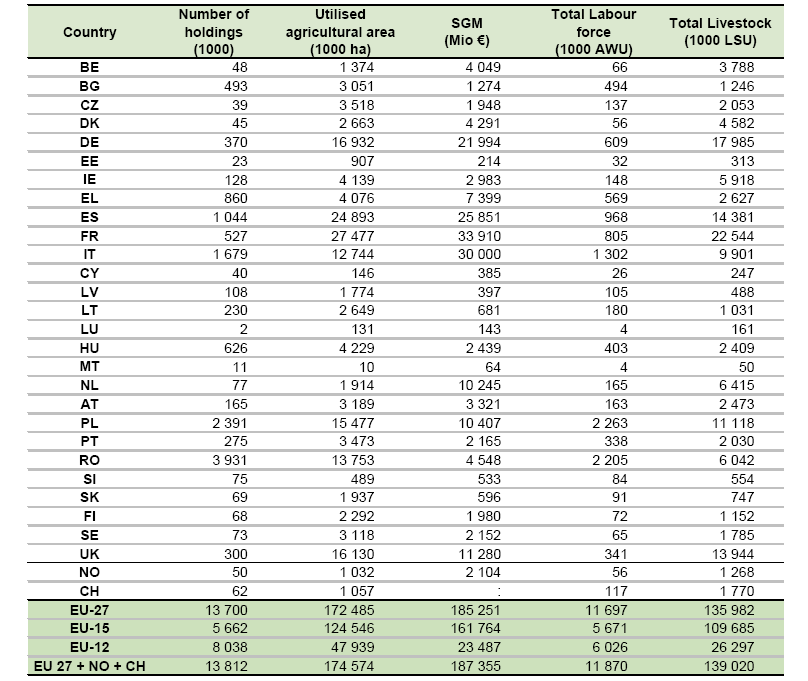 In Malta, the 20 % of UAA covered by the largest farms is occupied by farms larger than 5 ha. In Slovakia, farms larger than 2 782 ha cover 20 % of the total UAA. These larger farms in Malta have an average UAA of 7 ha and in Slovakia of 3 934 ha.

In 20 countries, the larger farms are all in the biggest UAA class (100 ha or more). Only in Malta and Slovenia does the 80 % threshold lie below 30 ha. The value of the threshold by country is shown in the last column of Table 1.

In Bulgaria, the Czech Republic, Hungary, Estonia and Slovakia, the larger farms occupying 20 % of the UAA are all above 1000 ha. This pattern occurs in several of the new Member States; here the structure of the agricultural holdings is related to the particular ownership structure made up of large-scale corporate farms inherited from former state-owned cooperatives.

Table 1 and Figure 2 illustrate that the group of larger farms, occupying 20 % of the total UAA, sometimes represents an extremely small proportion of all farms in a given country.

The share of larger farms is only over 1 % in 14 countries, and only over 5 % in Norway, Luxembourg and Switzerland. The highest percentage is found in Switzerland; here 6.33 % of the farms cover 20 % of the country’s UAA.

The FSS uses the standard gross margin (SGM) to measure the economic size of agricultural holdings. The SGM is the difference between the value of the agricultural output (crops or livestock) and the cost of inputs required to produce that output. The sum of all the margins per hectare of crop and per head of livestock in a farm is a measure of its overall economic size[2].

Overall, the total SGM of the agricultural holdings of the EU-27 in 2007 was 185 billion euro.

In 16 countries, the average SGM per farm of the smaller farms is under €20 000. All the new Member States except the Czech Republic belong to this group.

In the group of the larger holdings covering 20 % of the UAA, the average SGM per farm is highest in the Czech Republic (1.97 million euro) and the lowest averages per farm, all under €100 000, are observed in Malta, Greece, Austria, Slovenia and Ireland.

In countries such as Austria, the Netherlands, Belgium, Luxembourg and Norway the smaller holdings have an average SGM per farm that is at least 25 % of the average of the larger farms.

The total SGM of all the larger European farms covering 20 % of the UAA in each country makes up 11 % of the total EU 27 SGM but represents less than 1 % of the total number of farms.

In 2007, there was a total of 11.7 million annual work units (AWU), the equivalent of 11.7 million people, working full-time in agricultural activities in the EU-27. In 2007, the larger farms accounted for 5 % of this total labour force.

In the smaller farms the difference in average AWU per holding between the European countries is quite limited, ranging from 0.3 AWU in Malta to 2.9 AWU in the Czech Republic (Table 3). In the group of the larger farms there is a stronger contrast within the EU 27. The larger farms in Malta on average employ 1.8 AWU while in Slovakia the average per farm reaches 125 AWU.

Figure 4 shows that labour input of the larger farms as a percentage of the total labour force of all agricultural holdings is the lowest in Romania, where only 0.9 % of the labour force is occupied on 20 % of the UAA.

The 20 % of the UAA covered by the larger farms always represents less than 17 % of the total AWU. This percentage exceeds 10 % in only seven countries (Luxembourg, Switzerland, Denmark, Malta, Slovakia, Estonia and the Czech Republic).

The number of hectares of UAA per AWU is always greater in the larger farms than in the smaller ones. In the group of smaller farms the numbers are not very different, while in the larger farms they can vary considerably. The United Kingdom stands out with a figure of 594 ha/AWU, again related to the extensive rough pastures that make up the largest holdings. In Spain, Austria, Portugal, Romania and Sweden, for each full-time worker on the larger farms there is over 100 ha of UAA.

The larger farms of all EU 27 Member States have 10 % of the total LSU in the European Union.

The number of LSU per hectare is greater in smaller farms in most of the countries, with the exception of Estonia, Slovakia and Finland.

The larger farms are predominantly less intensive regarding livestock density. In Bulgaria, Austria and Romania the LSU/1000 ha is under 100.

Discrepancies in the sizes of the agricultural sector

Table 5 presents five key variables for all the holdings included in FSS 2007. These variables show the discrepancies between the sizes of the agricultural sector within the EU-27.

The key figures for the larger farms are included in Table 6; here the values from the group of larger farms in each country were added and compared with the total values of all farms in all the countries.

The FSS 2007 was conducted in all 27 Member States, Norway and Switzerland. In Belgium, Luxembourg, the Netherlands, Finland, Sweden, the United Kingdom, Norway and Switzerland, the FSS was conducted as a census; in all other Member States it was conducted as a sample survey. Regulation 571/88 states that the surveys must cover agricultural holdings where the UAA is at least one hectare or, if under one hectare, holdings which produce a certain proportion for sale or whose production unit exceeds certain physical thresholds. The same Regulation also sets, regardless of the threshold, the coverage to 99 % of the SGM.

Although the definition of an agricultural holding* is common to all countries, the thresholds that are applied by each country differ across Member States. This leads in the FSS to different coverage of small farms between countries. As these small farms contribute little to the total UAA in each country, the effect of this variance will be significant when comparing the number of farms, but not when comparing the UAA between Member States.

The size of an agricultural holding can be measured using several variables, such as the UAA, the economic output, the amount of livestock or even the labour force involved in the farm work. The major advantage of using UAA as a measure for the size of holdings is that the UAA is a very simple concept (that can be easily understood) and stable (no major increases or decreases in the amount of UAA).

One AWU corresponds to the work performed by a person engaged in full-time agricultural work on the holding over a 12-month period. The annual working time of such a worker is 1 800 hours (225 working days of 8 hours per day), unless there are different specific national provisions governing contracts of employment.

LSU: For each of the 23 categories of livestock surveyed in the FSS, a specific coefficient is established initially on the basis of the nutritional or feed requirement of each type of animal which converts the number of heads to an LSU number (1 LSU corresponds to 1 dairy cow or 10 sheep).

The ongoing revision of the common agricultural policy brings into focus the size of farms in the European Union. To measure the size of farms, different variables can be taken into account such as the economic performance, the labour force working on the farm, the production or the area.

In this statistical article the utilised agricultural area (UAA) is chosen for classifying farms by size in each country (see data sources and availability for more information). This classification provides the basis for a comparative study on the significance of the larger farms in the EU 27, Norway and Switzerland, using the 2007 data from the Farm Structure Survey (FSS).

The distribution of the UAA between large and small farms varies between countries, but in general a relatively small number of farms occupy a high percentage of the agricultural area.

In Figure 1, for each country the total UAA of all farms is broken down into eight classes according to the size of the holding’s UAA.

With this approach to analysis of the larger agricultural holdings, the definition of ‘large farm’ depends not on a uniform threshold, but reflects the different distribution in the different countries. This means that the measurement of the size of the farms is always relative to the distribution of each country’s UAA among the holdings.