The Labour cost survey (LCS) is one of the key structural surveys in the European Union (EU) covering the business economy. Eurostat has collected, processed and published regional labour cost data by economic activity for nearly 25 years.

This article describes some of the main findings concerning regional hourly labour costs, average hours worked and the share of social contributions in total labour costs paid by employers in selected sectors of the economy. 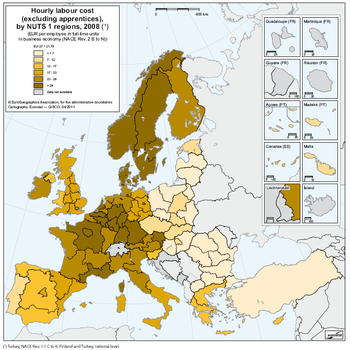 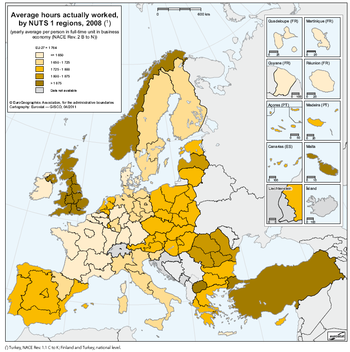 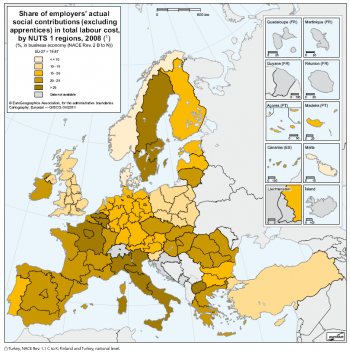 Map 1 shows significant regional variations in the cost of labour per hour worked in the business economy in 2008. At EUR 49 per hour, the Île-de-France region surrounding Paris has the highest average labour cost in Europe. This is nearly 25 times higher than Bulgaria, which has the lowest average labour cost at EUR 2 per hour.

Map 2 shows a regional comparison of the average hours actually worked per year in business in Europe. In 2008, all regions of the United Kingdom, Malta and, in non‑EU-27 countries, Norway, the former Yugoslav Republic of Macedonia and Turkey recorded an average number of hours actually worked per employee (in full-time equivalents) per year of over 1 875 hours. The average hours worked per employee were the lowest, at 1 650 or less, in all regions of France, in the three Belgian regions (Région wallonne, Vlaams Gewest and Région de Bruxelles-Capitale/Brussels Hoofdstedelijk Gewest), in Greece’s Nisia Aigaiou and Kriti, in seven German regions (Nordrhein-Westfalen, Bayern, Hessen, Hamburg, Bremen, Baden-Württemberg and Saarland) and in Denmark (where only national data are available).

When making comparisons, specific national legislative arrangements and habits concerning working time, which can also vary by economic sector (hotels and restaurants, transport, construction), come into play. The average time worked is also affected by the prevailing economic situation (full order books, short-time working and plant closures). In connection with the Labour Cost Survey, the regional database gives additional information on working time, such as the number of employees and the corresponding total number of hours actually worked and paid, broken down into full-time and part-time workers and in full-time equivalents. These data are also available at two-digit level (divisions) of NACE classification.

Map 3 gives an idea of the share of employers’ actual social contributions in labour costs in business in European regions in 2008. Comparisons should take into account specific national legislative arrangements and social security models.

The source of information on regional labour costs down to NUTS level 1 is the EU Labour Cost Survey (LCS). This survey is conducted every four years in the Member States of the European Union and in other European countries on the basis of Regulation 530/1999 and Regulation 1737/2005.

The survey’s population comprises all businesses with 10 or more employees. Since 2008, it has used the NACE Rev. 2 classification and although the LCS 2008 covers NACE sections B to S (excluding O), this chapter focuses on NACE Rev. 2 sections B to N (business economy).

The purpose of the survey is to measure the level and the structure of labour costs. It collects information on the components of labour costs. Besides wages (e.g. direct remuneration, bonuses and allowances, payments to employees’ saving schemes, payments for days not worked, wages and salaries in kind) these include a multitude of social security contributions payable by the employer (statutory, under collective agreements, contractual or voluntary), together with employers’ imputed social contributions (e.g. guaranteed remuneration in the event of sickness or payments to employees leaving the business). Costs of vocational training, taxes and subsidies relating to the employment of staff are also recorded.

All EU Member States plus Iceland, Norway, Croatia, the former Yugoslav Republic of Macedonia and Turkey participated in the LCS 2008. However, Iceland did not cover all NACE sections out of the NACE Rev.2 aggregate B to N (business economy); therefore, overall labour costs for the Icelandic business economy are not available.

Labour costs are the total expenditure borne by employers for the purpose of employing staff. The costs of people employed by temporary employment agencies are included in the sector of the agency employing them (NACE Rev. 2: codes 78.1, 78.2 and 78.3), not of the business for which they work.

Employers’ actual social contributions are attributed to the period during which the work is done.

Labour costs are a major component of the cost of producing goods and services and correspond to the costs borne by the employer for employing staff. Although labour costs are not the sole deciding factor in choosing where to locate a business, they are a key factor.

It is also important to know whether the regions examined are home to predominantly knowledge-intensive, capital-intensive or labour-intensive industries.

In 2008, the average labour cost across the EU in businesses with 10 or more employees in business economy (i.e. NACE Rev. 2 sections B to N) was EUR 21.8 per hour worked. There are considerable differences between European regions, however, in the level and structure of labour costs.