This article examines recent statistics in relation to developments for both industry and construction in the European Union (EU). Short-term business statistics (STS) are provided in the form of indices that allow the most rapid assessment of the economic climate within industry and construction (as well as services), providing a first evaluation of recent developments for a range of economic activities. STS show developments over time, and so may be used to calculate rates of change, typically showing comparisons with the month or quarter before, or the same period of the previous year. As such, STS do not provide information on the level of activity, such as the monetary value of output (value added or turnover) or actual prices. 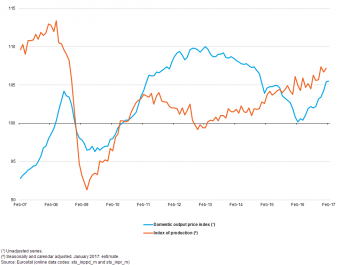 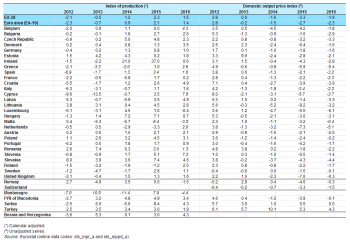 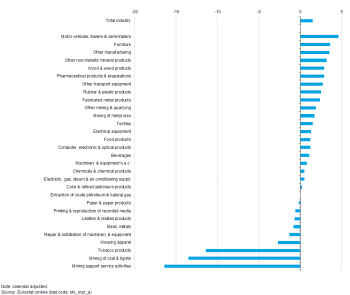 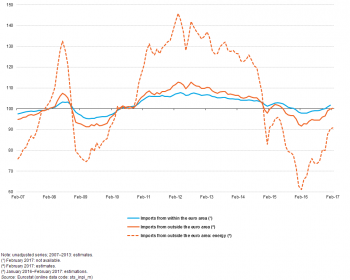 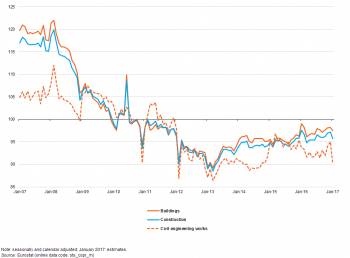 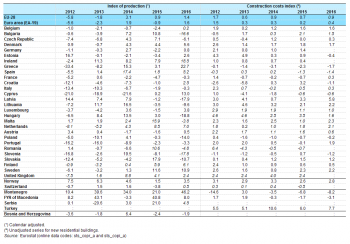 The impact of the global financial and economic crisis on the EU-28’s industrial economy and the muted recovery can be clearly seen in two of the main industrial indicators, namely the industrial production index and the index for industrial domestic output prices. Over several years there was relatively stable output and price growth across the EU-28, which was interrupted by the onset of the crisis in May 2008 (see Figure 1), when the month-on-month rate of change for the EU-28’s industrial production index turned negative, while the index for domestic output prices peaked two months later in July 2008. The rapid fall in industrial output lasted one year, returning to a positive rate of change in May 2009, while domestic output prices reached their lowest level in July 2009 and experienced a run of relatively sustained increases from October 2009.

The decline in industrial output in the EU-28 from its relative peak in April 2008 was particularly steep (-19.5 %), as the relative trough recorded in April 2009 was the lowest level of output since September 1997. By contrast, although industrial output prices in July 2009 were 7.6 % lower than at their relative peak a year earlier, they remained in line with the price levels recorded between October and November 2007 prior to the financial and economic crisis; in part, price developments continued to reflect the relatively high price of crude oil and associated energy-related and intermediate products.

Industrial output in the EU-28 recovered during a period of slightly more than two years from its relative low in April 2009, recording positive month-on-month rates of change for 19 out of the next 28 months through to a peak in August 2011: this peak was 13.9 % above the April 2009 low but nevertheless production remained 8.3 % below its pre-crisis peak of April 2008. Thereafter, there was a gradual decline in EU-28 industrial output observed through until November 2012 during which time output contracted by 4.6 %; subsequently industrial output grew at a relatively slow pace to March 2015, increasing 5.0 % over the course of two years and four months. Between March 2015 and July 2016, the overall development in the industrial production index was irregular, with no sustained period of expansion or contraction. From July 2016 through to January 2017 (the latest data available at the time of writing) the EU-28 index of industrial production increased, up 2.6 %.

Developments for 2013 were mixed, as 15 of the 28 EU Member States recorded a contraction in industrial output and the level of production across the whole of the EU-28 fell by 0.5 %. The largest declines in activity were recorded in Cyprus, Malta, Sweden, Greece, Finland, Italy and Luxembourg, where industrial production fell by at least 3.0 % between 2012 and 2013. In 2014, a majority of Member States — 19 in total — reported an increase in output (compared with a year before), most notably Ireland where the industrial production index increased by 21.0 %. By contrast, Malta reported a decrease of 5.7 % and falls of 2.0 % or more were also reported by the Netherlands and Greece. In 2015, Ireland again reported exceptional growth due to on-shoring activities of some large multinational enterprises, with industrial output up 37.0 %; the next largest increases were reported by Slovakia (7.4 %) and Hungary (7.1 %). Only two of the Member States reported a decline in industrial production in 2015: -1.2 % in Finland and -3.3 % in the Netherlands. In 2015, Greece reported an increase of 1.0 % in industrial output and Cyprus an increase of 3.5 %, their first annual increases since 2006 and 2008 respectively. Developments for 2016 were quite similar to those observed during 2015, in that only two Member States — Luxembourg and Malta — reported falls in industrial output, -0.4 % and -3.5 % respectively. Ireland’s run of extremely large increases came to an end as it posted an increase of 0.6 %. Both Cyprus and Greece confirmed their returns to positive rates of change, with stronger growth in 2016 than in 2015, while Finland and the Netherlands reported growth in their industrial output after four and two years of contraction respectively.

The downturn in activity for construction within the EU-28 lasted longer than for industry. Despite occasional short-lived periods of growth, the index of production for construction fell from a peak in February 2008 to a low in March 2013, a decline that lasted in total five years and one month and left construction output 26.2 % lower than it had been. Construction output expanded by a total of 7.6 % during the next 13 months and between then (April 2014) and the most recent period for which data are available (January 2017) output remained relatively stable (see Figure 4).

Short-term business statistics (STS) are compiled within the scope of Regulation (EC) No 1165/98 of 19 May 1998 concerning short-term statistics. The STS Regulation brought major changes and improvements in the availability and timeliness of indicators following its implementation. The STS Regulation has been amended and adjusted to meet emerging user needs, generally in relation to monetary union and more specifically to the requirements of the European Central Bank (ECB).

Indicators common to industry and construction include the production index and labour input indicators concerning employment, wages and salaries, and hours worked. For industry there are additional STS indicators concerning turnover and output prices, which are compiled as a total and also distinguishing between domestic and non-domestic markets, with a further analysis of non-domestic markets between euro area and non-euro area markets. In a similar manner, there is a distinction made for the data on industrial import prices between imports from euro area and non-euro area markets. For construction activities there is a distinction in the production index between building and civil engineering, while additional indicators are collected on building permits, as well as construction cost and price indices.

The presentation of short-term statistics may take a variety of different forms. Unadjusted (or gross) indices are the basic form of an index. Calendar adjustment takes into account the calendar nature of a given month in order to adjust the index. The number of working days for a given month depends on: the timing of certain public holidays (Easter can fall in March or in April depending on the year); the possible overlap of certain public holidays and non-working days (some fixed holidays can fall on a Sunday); whether or not a year is a leap year, and other reasons. Seasonal adjustment aims, after adjusting for calendar effects, to take into account the impact of known seasonal factors that have been observed in the past. For example, in the case of the production index, annual summer holidays have a negative impact on industrial production.

NACE Rev. 2 is the latest version of the statistical classification of economic activities and has been implemented in STS during 2009. This involved not just changing data compilation practices to use NACE Rev. 2 but also recalculating or estimating a time series in NACE Rev. 2, normally back to the year 2000. Simultaneously with the introduction of NACE Rev. 2, a new base year (2005) was adopted for STS indices to reflect better the economic structure; this in turn was replaced during 2013 with the base year of 2010, once again updating the system of weights in order to accommodate changes in the economic structure. The data in this article are therefore presented using NACE Rev. 2 as indices with 2010 = 100 and using weights from 2010 — see the article on the 2015 rebasing exercise for more information.

The profile and use of STS is expanding rapidly, as information flows have become global and the latest news release for an indicator may have significant effects on financial markets, or decisions that are taken by central banks and business leaders. STS are a key resource for those who follow developments in the business cycle, or for those who wish to trace recent developments within a particular industry, construction or service.

Some of the most important STS indicators are a set of principal European economic indicators (PEEIs) that are essential to the ECB for conducting monetary policy within the euro area. Three PEEIs concern industrial short-term business statistics: production, output prices of the domestic market and import prices. A further two PEEIs concern construction short-term business statistics: production and building permits.