This article has been archived, for updated data see Living conditions in Europe - housing.

Among the EU-27 Member States, the housing cost overburden of tenants renting at market prices in 2018 was highest in Greece where 83.1 % of tenants spent more than 40 % of their income on housing. 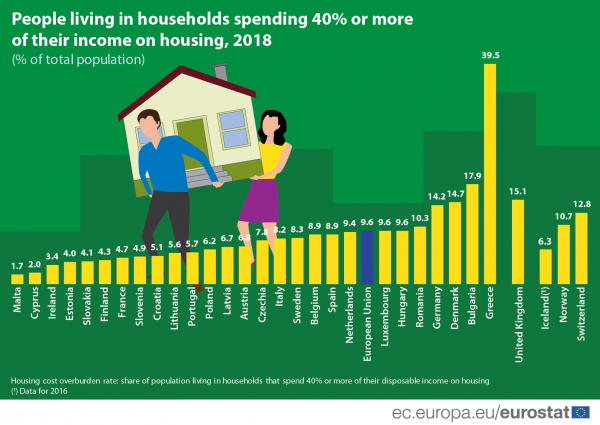 This article provides an overview of recent statistics on housing in the European Union (EU), the United Kingdom, three of the EFTA countries and four candidate countries, focusing on dwelling types, tenure status (owning or renting a property), housing quality and affordability.

Decent housing, at an affordable price in a safe environment, is a fundamental need and considered by many to be a human right. Ensuring this need is met, which is likely to alleviate poverty and social exclusion, is still a significant challenge in a number of European countries. 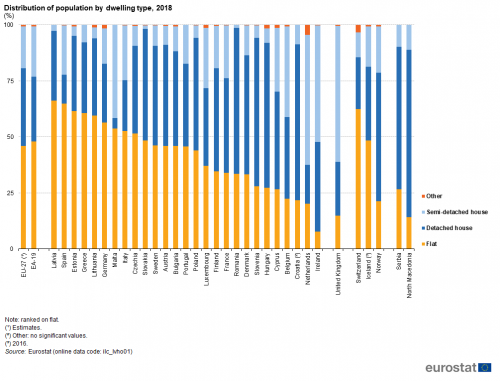 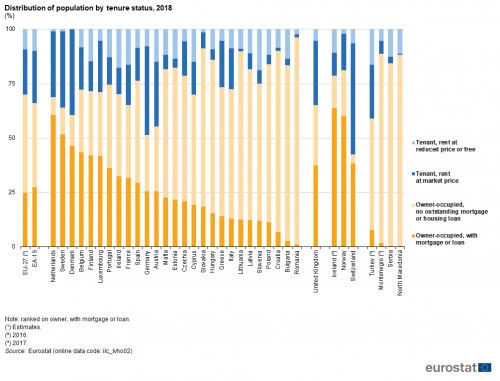 The share of the population living in a dwelling with a reduced price rent or occupying a dwelling free of charge was less than 20.0 % in all of the EU Member States and the eight non-member countries for which data are shown.

One of the key dimensions in assessing the quality of housing is the availability of sufficient space in a dwelling. The overcrowding rate describes the proportion of people living in an overcrowded dwelling, as defined by the number of rooms available to the household, the household’s size, as well as its members’ ages and their family situation. 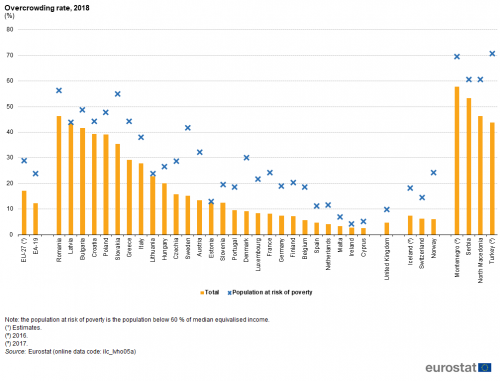 Within the population at risk of poverty (in other words, people living in households where equivalised disposable income per person was below 60 % of the national median), the overcrowding rate in the EU-27 was 28.9 % in 2018, some 11.8 percentage points above the rate for the whole population (see Figure 3).

Across the EU-27 as a whole, 4.3 % of the population suffered from severe housing deprivation in 2018 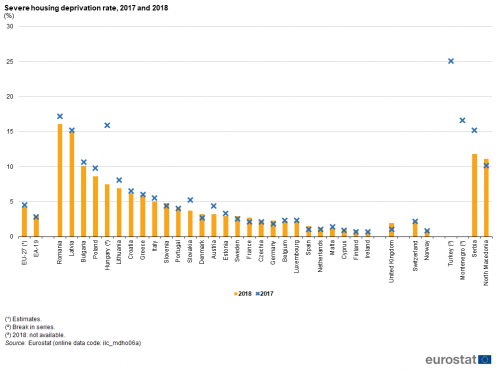 In 2018, 9.6 % of the EU-27 population lived in households that spent 40 % or more of their equivalised disposable income on housing

The proportion of the population whose housing costs exceeded 40 % of their equivalised disposable income was highest for tenants with market price rents (25.1 %) and lowest for persons in owner-occupied dwellings with a loan or mortgage (4.0 %) (see Table 1). 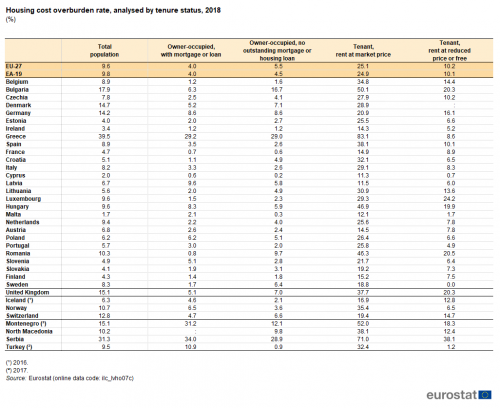 The EU-27 average masks significant differences between the EU Member States: at one extreme there was a number of countries where a relatively small proportion of the population lived in households where housing costs exceeded 40 % of their disposable income in 2018, notably Malta (1.7 %) and Cyprus (2.0 %). At the other extreme, two out of every five persons (39.5 %) in Greece and more than one in six (17.9 %) of the population in Bulgaria spent more than 40 % of their equivalised disposable income on housing, as did around one in seven persons in Denmark (14.7 %) and Germany (14.2 %).

Looking at the tenure status with the highest proportion of the population where housing costs exceeded 40 % of their disposable income, namely tenants with market price rents, there were also large differences between the EU Member States. In 2018, there were six Member States where more than one third of the population living as tenants with market price rents spent more than 40% of their equivalised disposable income on housing, with this proportion of the population exceeding two fifths in Romania (46.3 %) and Hungary (46.9 %), reaching half in Bulgaria (50.1 %) and exceeding four fifths (83.1 %) in Greece. At the other end of the range, Malta (12.1 %), Latvia (11.5 %) and Cyprus (11.3 %) reported the lowest housing cost overburden rates for tenants with market price rents.

The data used in this article are primarily derived from micro data from EU statistics on income and living conditions (EU-SILC). The EU-SILC survey is carried out annually and is the main survey that measures income and living conditions in Europe. The reference population is all private households and their current members residing in the territory of an EU Member State at the time of data collection; persons living in collective households and in institutions are generally excluded from the target population. The data for the EU and the euro area are population-weighted averages of national data.

Housing conditions influence the quality of life of people in many ways: providing shelter, security, privacy and a space in which to relax, learn, work and live. Housing can also be seen in the context of its local environment, in terms of ease of access to childcare, educational establishments, employment, recreational opportunities, shops, public services and so on. Financing housing, whether purchased or rented, is a major issue for many households, often linked to housing quality.

The EU does not have any specific responsibilities with respect to housing; rather, national governments develop their own housing policies. Nevertheless, many of the EU Member States face similar challenges, for example: how to renew housing stocks, how to plan and combat urban sprawl, how to promote sustainable development, how to help young and disadvantaged groups enter the housing market, or how to promote energy efficiency among homeowners.

Questions of social housing, homelessness or integration play an important role within the EU’s social policy agenda. The charter of fundamental rights stipulates in Article IV-34 that ’in order to combat social exclusion and poverty, the Union recognises and respects the right to social and housing assistance so as to ensure a decent existence for all those who lack sufficient resources, in accordance with Community law and national laws and practices’. Within this context, a European Council meeting in Nice in 2000, reached an agreement on a set of common objectives for the EU’s strategy against poverty and social exclusion, including two objectives related to housing, namely ’to implement policies which aim to provide access for all to decent and sanitary housing, as well as basic services necessary to live normally having regard to local circumstances (electricity, water, heating, etc.)’ and ’to put in place policies which seek to prevent life crises, which can lead to situations of social exclusion, such as indebtedness, exclusion from school and becoming homeless’. This remit was extended in 2010 when the European platform against poverty and social exclusion (COM (2010) 758 final) set out a series of actions to help reduce the number of people at risk of poverty or social exclusion by at least 20 million persons by 2020 (compared with 2008) — see also the article on people at risk of poverty or social exclusion.