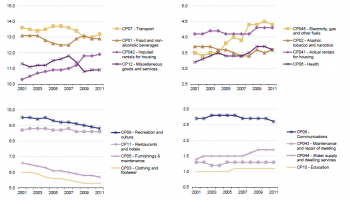 Figure 6: Shares of different types of expenditure between 2001 and 2011 (COICOP 2 and selected COICOP 3 categories, % of total expenditure) - Source: Eurostat (nama_co3_c)

Figure 7: Impact of the crisis on different types of expenditure in 2009 (COICOP 2 and selected COICOP 3 categories, year-on-year change in %) - Source: Eurostat (nama_co3_k)

Figure 10: Changes in final consumption expenditure in the four countries most affected by the crisis (COICOP 2 categories, change between 2011 and 2008 in %) - Source: Eurostat (nama_co3_k)

This article analyses household consumption expenditure in the European Union (EU), the concepts and nomenclatures used, data sources and the individual components ofwhich vary widely among Member States of the due to cultural, economic and some other factors affecting spending and saving habits.

EU-27 final and actual household consumption recover from the crisis.

In comparison to a drop of 4.6 % in GDP in 2009, the worst year of the crisis, the impact of the financial and economic crisis on EU-27 household consumption was less marked, falling by 1.8 % that year. Actual individual consumption, a wider measure of the goods and services consumed by households, which notably also encompasses individual government consumption, fell even less (-1.0 %) as government expenditure continued to grow by 2.0 % in 2008 and 2009. Since then, households’ final and actual consumption grew by 1.0 % in 2010 and by 0.3 % and 0.1 % respectively in 2011, while growth in government consumption declined to 1.0 % in 2010 and to 0.3 % in 2011.

In 2011, both EU-27 final consumption expenditure and actual individual consumption recovered from the crisis, at 18 000 and 21 100 euros per capita respectively. While these figures are not presented in the graph below, the right side of Figure 2 shows that household expenditure is also above the respective level in 2008 in current prices with 14 200 euros per capita. Only household consumption has still not fully recovered in volume terms, i.e when adjusting for increases in prices.

While GDP per capita is often considered as an indicator of a country’s living standard, it is actually the sum of all goods and services produced in that country. As highlighted in the 2009 ‘Report on the measurement of economic performance and social progress’ by Stiglitz, Sen and Fitoussi, actual individual consumption per capita is an alternative indicator better suited to describe the material welfare situation of households as it takes account of widespread differences across countries in the shares of public financing for the provision of education and health services to individuals.

While the share of actual individual consumption in 2011 is close to the EU-27 average of 70 % of GDP for most countries, Figure 3 shows that differences in the level of actual individual consumption per capita in euros are large, ranging from 35 000 euros in Luxembourg and 29 600 euros in Denmark to 6 400 euros in Hungary in 2011 (respectively 3 400 euros in Bulgaria and 4 200 euros in Romania based on last available data for 2010). However, this spread is more than halved when differences in purchasing power are taken into account.[1]

In addition, the effects of the financial and economic crisis have varied significantly. The Baltic economies and Greece were the most severely affected, with loss of actual individual consumption (in volume terms) of 12 % to 15 % between 2008 and 2011. While actual individual consumption started to recover in the Baltic countries in 2011, the contraction accentuated in Greece, in connection with the deepening recession and debt crisis, so that the losses between 2008 and 2011 increased to nearly 15 %. In Romania, Hungary, Bulgaria, Ireland and Poland actual individual consumption also fell by between 5 % and 9 % from 2008 to 2011, while it expanded by between 5 % and 8 % in Luxembourg, Sweden and Poland. However, in 2011, the situation improved in most Member States, with Ireland, Portugal and Greece being the main exceptions.

Impact of the crisis on consumption trends

Rising shares of EU-27 household final expenditure were devoted to housing and energy, while furniture and maintenance were most affected by the crisis

Together with the next largest components, transport (1 900 euros) and food and non-alcoholic beverages (1 800 euros), this already accounted for about 50 % of total expenditure. The other half of households’ expenditure includes spending on recreation and culture (1 300 euros), restaurants and hotels (1 200 euros), furnishings, household equipment and routine maintenance of the house, (800 euros), clothing and footwear (800 euros), health (500 euros), alcoholic beverages, tobacco and narcotics (500 euros), communications (500 euros), education (400 euros) and miscellaneous goods and services (1 600 euros), which include e.g. expenses for personal care, social protection, insurance and financial services.

Looking at the composition of EU-27 household final consumption expenditure over time, Figure 6 suggests that the shares of the main consumption items changed only gradually over the past decade.

However, there are some medium-term trends, such as a rising share of expenditure on electricity, gas and other fuels, (imputed and actual) housing rents, water supply and other dwelling services and health, and falling shares for furnishings, clothing, recreation and communications. Some effect of the financial and economic crisis could notably be discerned in a drop in the shares of miscellaneous goods and services between 2007 and 2009, which include financial and insurance services and transport. On the other hand, the shares for food and non-alcoholic beverages, health, actual and imputed housing rentals and water supply and dwelling services seem to have increased between 2007 and 2009, which would be consistent with the fact that expenditure on basic needs tends to be more resilient than other consumption items in an economic recession.

Examination of the respective volume figures allows a more detailed analysis of the impact of the crisis. Focusing only on 2009 as the worst year, Figure 7 shows that housing rentals and related energy and service costs, as well as education, health, communications and food were less affected than total expenditure, while the most significant impact was on housing equipment, maintenance, clothing and leisure-related activities.

Turning to an analysis of country-specific data, this article can only highlight a few salient facts. Figure 8 shows that southern and eastern Member States generally spent a higher than average proportion on food and non-alcoholic beverages. Indeed, this share is largest in Latvia and Estonia, with 20 %, but below 10 % in Luxembourg, the United Kingdom and Austria. On the other hand, the combined share of actual and imputed housing rentals is generally lower in these countries, ranging from 7 % in Poland to 15 % in the Czech Republic, in comparison with up to 23 % in Finland.

Figure 9 shows that expenditures in 2009 fell most in Latvia (-21.4 %), Lithuania (-16.6 %) and Estonia (-13.3 %), while cumulative losses over 2008-2011 progressively increased to 15.3 % for Greece in connection with a deepening recession. Greece is also the country where consumption contracted most in 2011 (-7.1 %), while decreases in the United Kingdom, Slovakia, Ireland, Denmark and Spain were more moderate (between -0.8 % and -0.3 %) and consumption recovered in the other Member States. Data for Bulgaria, Spain, Lithuania and Romania for 2011 were not available when preparing this article.

Referring to changes between 2008 and 2011, Figure 10 shows that the impact of the crisis on different consumption categories varied significantly across countries. Indeed, even though the overall contraction in household consumption was of similar magnitudes in Lithuania (-15.5 %), Greece (-15.3 %), Latvia (-15.3 %) and Estonia (-12.6 %), Lithuania showed particularly severe contractions for miscellaneous goods and services (-27.7 %), transport (-26 %) and food (-21.6 %), but significant increases for smaller categories such as communications (47.0 %) and education (24.6 %).

The data used for this article on final consumption expenditure and its breakdowns are transmitted to Eurostat in the framework of the European system of national and regional accounts (ESA95), based on Regulation 2223/96 of 25 June 1996.

Consumption is a key indicator of citizens’ wellbeing, with housing, energy, transport and food accounting for about half of total household expenditure. This article uses data on the development and structure of expenditure to identify trends over the past decade. For instance, the impact of the economic and financial crisis on actual individual consumption of households was relatively moderate, as rising government consumption counterbalanced at least partly a more significant contraction in household consumption.

While the Baltic economies suffered most in 2009, household spending continued to decline in Greece due to the deepening recession and the fall was sharpest in 2011. Despite some general trends in EU-27 data, detailed consumption patterns vary significantly between Member States and the impact of the crisis on specific expenditure categories was also quite varied.</noprint>