This Statistics Explained article is outdated and has been archived - for recent articles on science and technology see here.

This article analyses data on economic statistics in high-technology (high-tech) sectors in the European Union (EU) and in some EFTA and candidate countries.

Creating new technologies, making effective use of them and bringing them to market are essential in the global race for competitiveness. High-tech sectors and enterprises are key drivers of economic growth and productivity, and generally provide high value-added and well-paid employment. 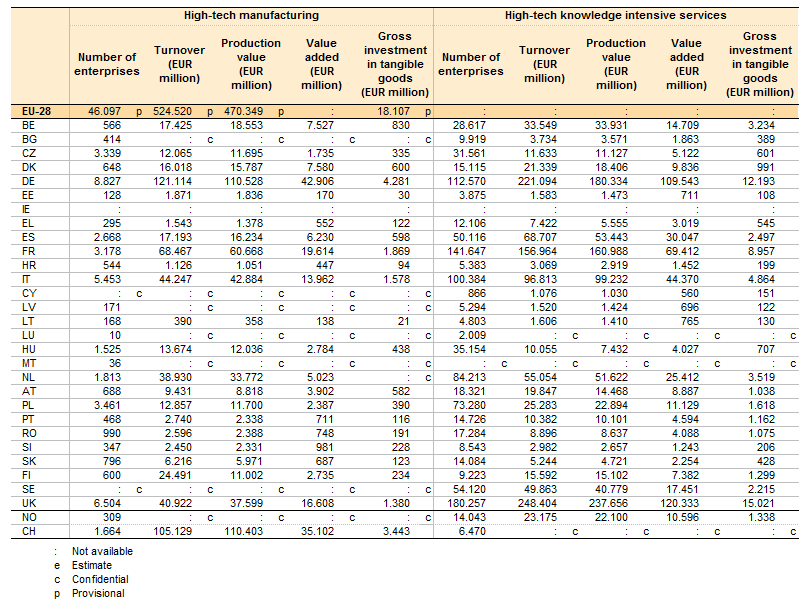 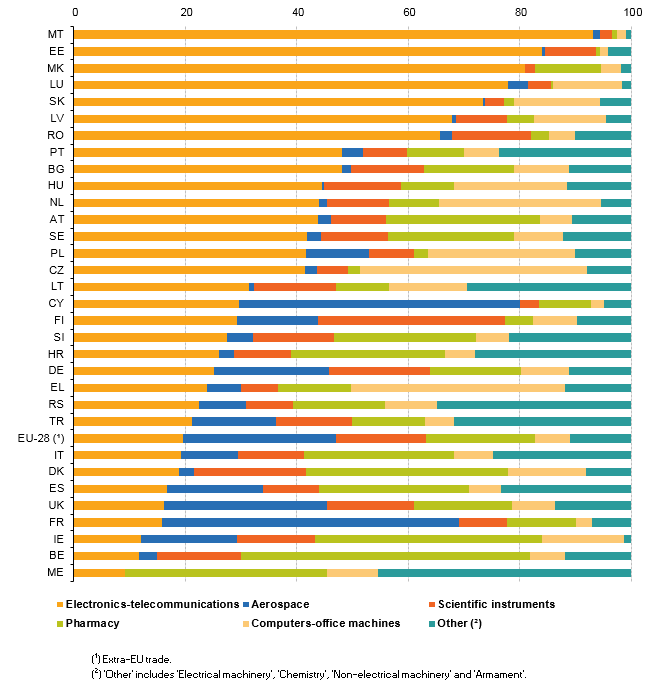 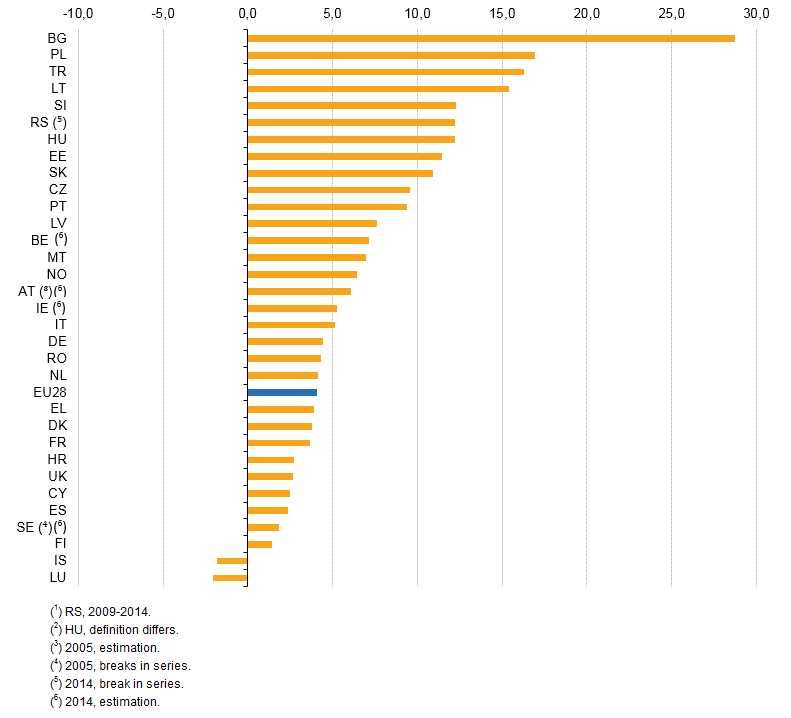 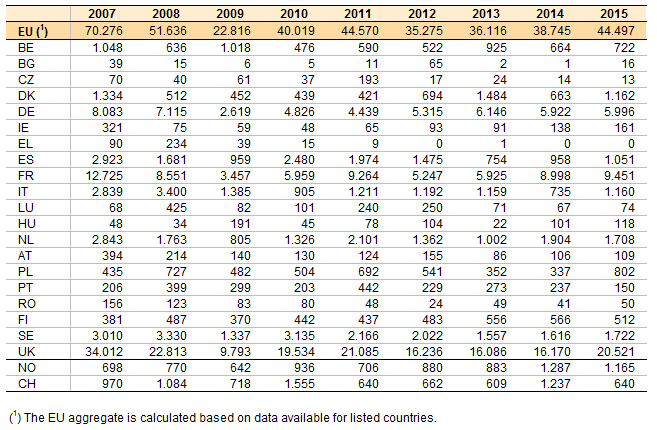 High-tech products represented 17.0 % of the value of all exports from the EU-28 in 2014, though with wide disparities between countries, ranging from a 35.3 % share in Malta to just 2.9 % in Greece. Two product groups, electronics-telecommunications and aerospace, together accounted for nearly half (47.1 %) of EU high-tech exports (Figure 1). A further 42.0 % came from scientific instruments, computers-office machines and pharmacy. The remaining four product groups — chemistry, electrical machinery, non-electrical machinery and armament — accounted for a mere 10.9 % of high-tech exports.

In value terms Germany was the EU's leading exporter of high-tech products to the rest of the world in 2015, followed by the Netherlands, France and the UK. Seven countries — Belgium, Denmark, Germany, Ireland, France, the Netherlands and Austria — recorded high-tech trade surpluses. In 2015, more than two thirds of the countries covered increased their high-tech exports from 2014 levels. Overall, however, the EU recorded a high-tech Extra-EU trade deficit in 2015, with imports around EUR 22 billion higher than exports.

Research and development (R&D) spending in high-tech sectors by EU-28 businesses increased by an average of 4 % per year in 2005-2014, reaching EUR 182 billion in 2014. Bulgaria saw the highest annual growth over the period, averaging more than 29 %, while at the other end of the scale Luxembourg and Iceland recorded annual falls of 2.1 % and 1.8 %, respectively (see Figure 2).

High-tech statistics are derived from various domains and sources of Eurostat’s official statistics (CIS, COMEXT, LFS, SBS, PATSTAT and R&D). Coverage and availability are therefore dependent on these primary sources.

The sectoral approach is an aggregation of manufacturing industries according to their technological intensity (R&D expenditure divided by value added). It is based on the Statistical classification of economic activities in the European Community (NACE) at 2-digit level for compiling aggregates related to high technology, medium-high technology, medium-low technology and low technology. Services are mainly aggregated into knowledge-intensive services and less knowledge-intensive services, based on the share of employed people who have undergone tertiary education (the level of education following secondary schooling).

It should be noted that, due to the move from NACE Rev. 1.1 to NACE Rev. 2, the definition of high-technology industries and knowledge-intensive services changed in 2008. For high-tech statistics, this means that two different definitions, based on the two versions of NACE, are used in parallel. The data for each NACE version are presented in separate tables depending on data availability.

The product approach was created to complement the sectoral approach. The product list is based on the calculations of R&D intensity by groups of products (R&D expenditure divided by total sales). The groups classified as high-technology products are aggregated on the basis of the Standard international trade classification (SITC). The product approach is used for data on high-tech trade.

Due to the move from SITC Rev. 3 to SITC Rev. 4, the definition of high-tech products also changed, in 2011. The data in this article conform to SITC Rev. 4.

The data on venture capital investment are provided by Invest Europe (formerly named the European Private Equity and Venture Capital Association, EVCA). Two thirds of private equity firms and more than 90 % of capital under management on the European market are covered by statistics.

In the context of economic globalisation, technology is a key factor in boosting the growth and competitiveness of business. High-tech industries are expanding most strongly in international trade and their dynamism helps to improve performance in other sectors.

Investment in research, development, innovation and skills constitutes a key policy area for the EU as it is essential to economic growth and the development of a knowledge-based economy. Research, development, science and technology are recognised as key factors for bolstering competitiveness and creating better and well-paid jobs, greater social cohesion and a smart, sustainable and inclusive economy.

The EU has put in place a framework to measure progress and achievements in relation to the goals identified first in the Lisbon strategy and redefined in the Europe 2020 strategy.

The production and development of statistics on science and technology are governed by Decision 1608/2003/EC of the European Parliament and of the Council. The Decision highlights the need for comparable data on research and development, technological innovation, and science and technology. The aim is to create an information system on science, technology and innovation that can support and monitor the various EU policies implemented in this respect.

Commission Regulation (EC) No 753/2004, which is related to the Decision above, sets out a framework for the standards, definitions and classifications used in the production of statistics on science and technology.

In the light of developments in statistics on science and technology, as well as requests for new, more detailed and more frequent statistics, new implementing measures were laid down in 2012 through Regulation (EU) No 995/2012.

The framework for statistics on high-technology industries and knowledge-based services consists principally in making more effective use of existing national and international data sources (including within the European statistical system). This work also involves identifying and classifying activities and products, and measuring the economic performance of these activities and their contribution to the performance of the economy as a whole.

Launched in 2010, the Europe 2020 strategy sets out a vision of Europe’s social market economy for the 21st century underpinned by three mutually reinforcing priorities:

The European Commission is further boosting the Europe 2020 strategy with seven flagship initiatives. One of these is the ‘Innovation Union’, supporting ‘smart growth’. The Innovation Union initiative aims to improve the framework for research and innovation in the EU. Over 30 action points have been published.

Moreover, a Commission Communication published in 2010 — 'Regional Policy contributing to smart growth in Europe 2020' — shows how crucial EU regional funding is to achieving growth, by targeting investment in innovation in all regions. A key element of this is to encourage national and regional governments to design ‘smart specialisation strategies’ to help regions identify their best assets. Concentrating resources on a limited number of priorities will ensure more effective use of public funds and help to raise levels of private investment.

Furthermore, following a request from the European Council, in 2013 the Commission published a Communication on 'Measuring innovation output: towards a new indicator'. This indicator measures the extent to which ideas from innovative sectors are able to reach the market, providing better jobs and making Europe more competitive. It supports the benchmarking of national innovation policies and shows significant differences between EU countries. This indicator makes use of several of Eurostat’s science, technology and innovation (STI) statistics and concepts.

The Europe 2020 strategy includes trade-opening initiatives for ̒ sectors of the future̕, among them high-tech products and services.