This Statistics Explained article is outdated and has been archived - for recent articles on Science and technology see here.

This article analyses data on high-technology or 'high-tech' sectors in the European Union (EU) and in some EFTA and candidate countries. In the global race for competitiveness, it is essential to create, exploit and commercialise new technologies. High-tech sectors and enterprises are key drivers of economic growth, productivity, and generally provide high value added and well-paid employment. 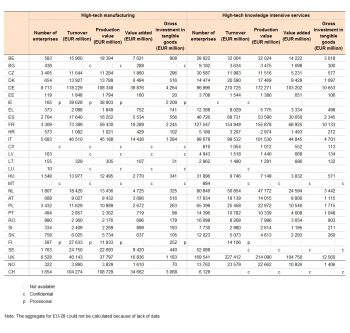 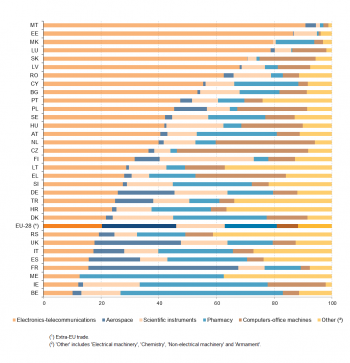 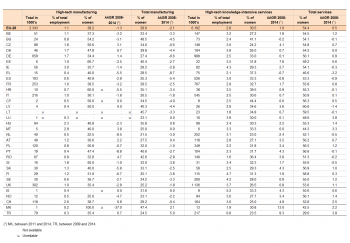 Economic statistics on high-tech industry and knowledge-intensive services refer to the number and to some performance indicators of enterprises in high-tech sectors (see Table 1).

When we look at turnover in high-tech manufacturing, Germany shows the highest figure, reaching EUR 118 billion, ahead of Switzerland (EUR 104 billion), France (EUR 73 billion) and Italy (EUR 47 billion). A similar picture emerges if value added at factor cost is taken into account: in 2013, Germany provided the highest contribution (about EUR 40 billion), followed by Switzerland, France and the United Kingdom (EUR 35 billion, EUR 19 billion and EUR 17 billion, respectively). Over the same period, figures on turnover were higher for the high-tech knowledge-intensive services than for high-tech manufacturing in all the countries for which data are available except Estonia, Finland, Hungary and Slovakia. Knowledge-intensive services generated a production value at least three times higher than high-tech manufacturing in Lithuania, Netherlands, Norway, Portugal, Romania, Spain and United Kingdom.

With reference to the EU-28, the value of high-tech exports represented 15.6 % of all exports in 2014. However, wide disparities were registered across countries, with figures ranging from 44.9% in Malta to just 2.0% in Greece. Two groups of products, ‘electronics - telecommunications’ and ‘aerospace’, together accounted for 46.1 % of the high-tech exports worldwide (Figure 1). A further 42.2% came from ‘scientific instruments’, ‘computers - office machines’ and ‘pharmacy’ groups. By contrast, ‘chemistry, ‘non-electrical machinery’, ‘electrical machinery’ and ‘armament’ totalled a mere 11.7 % of high-tech exports.

In value terms, Germany was the EU's leading exporter of high-tech products to the rest of the world in 2014, followed by France, the Netherlands and the United Kingdom. Eight countries — Austria, Belgium, the Czech Republic, France, Germany, Hungary , Ireland and the Netherlands — recorded high-tech products trade surpluses. In 2014, more than two thirds of the countries covered increased their high-tech exports from 2013 levels. Overall, however, the EU recorded a high-tech Extra-EU trade deficit in 2014, with imports around EUR 7 billion higher than exports.

The share in total employment of both manufacturing and services of the high-technology sectors varied considerably from one country to another in 2014. High-tech manufacturing accounted for 0.2 % of total employment in the Former Yugoslav Republic of Macedonia, 2.9 % in Malta and 3.0 % in Ireland, whereas values of the same indicator in the high-tech knowledge-intensive services ranged from less than 2 % in the Former Yugoslav Republic of Macedonia, Romania, Lithuania and Turkey to over 5 % in Iceland (see Table 2).

Over the 2008–2014 period, the EU-28 average annual growth rate (AAGR) for persons employed in high-tech sectors was negative. The number of persons employed in the manufacturing sector decreased by 2.1 % a year, whereas values for high-tech manufacturing recorded a slower decline (1.3 % a year on average). This decrease in employment can be partially explained by the economic crisis that hit Europe in 2010, the impact of which was also observed in the services sector, which recorded a minor growth of 0.5 % a year. High-tech knowledge-intensive services showed some resilience to the crisis, recording a rise in the number of jobs: +1.0 % on average per year from 2008 to 2014.

Some important differences emerge when comparing the employment changes among countries, with significant growth on the one hand and equally important decline on the other. Out of 33 observed countries, 20 registered a fall in employment in high-tech manufacturing in the 2008–2014 period, with the biggest decrease (37.0 %) recorded in the Former Yugoslav Republic of Macedonia, followed by Portugal (8.8 %). Growth in high-tech manufacturing was observed in five countries: Austria (2.2%), the Czech Republic (3.1 %), Malta (3.8 %), Romania (4.7%) and Turkey (6.7 %, in 2009-2014). The loss in high-tech knowledge-intensive services was more moderate as only four countries registered a decline: the Netherlands (-2.4 %), Spain (-0.8 %), Greece (-0.7 %) and Bulgaria (-0.2 %). The best performing countries in terms of the growth of employment in high-tech knowledge-intensive services were Luxembourg (6.1 %), Estonia (7.8%), Turkey (9.3 %) and the Former Yugoslav Republic of Macedonia (13.0 %).

As regard the gender distribution, overall, roughly around one out of three employees in the high-tech sectors was a woman. However, the share of women was different in high-tech manufacturing and knowledge-intensive services (data for EU-28, 2014):

Within the EU-28, high-tech sectors accounted for 3.9 % of the total employment in 2014, with two thirds of persons occupied in high-tech knowledge-intensive services and one third in high-tech manufacturing.

The national averages and regional highest and lowest shares vary significantly from country to country.

With regard to national averages, 16 out of 33 observed countries registered values higher than the EU-28 average (3.9 %), with rates of more than 5.0 % in Denmark, Finland, Iceland, Ireland, Malta, Slovenia and Switzerland. On the other hand, the lowest national shares of high-tech sectors in total employment (below 2.5 %) were registered in Lithuania, the Former Yugoslav Republic of Macedonia, Romania and Turkey.

At regional level, high shares of employment in high-tech sectors are often observed in capital regions or in regions close to capitals. The Berkshire, Buckinghamshire and Oxfordshire region of the United Kingdom, situated in close proximity to London, stand out with 11 % of its labour force in high-tech sectors. The following regions are rated similarly: Comunidad de Madrid (ES) with 8.2 %, Hovedstaden (DK) with 9.5 % and Praha (CZ) with 9.5 %. By contrast, the lowest proportions (under 1 %) were registered in Agri, Kars, Igdir, Ardahan (TR) and Anatoliki Makedonia, Thraki (EL). The Czech Republic, Denmark, Hungary, Norway, Spain and the United Kingdom show the biggest regional variation (ratio of highest to lowest proportion). The smallest discrepancies in employment between regions are observed in Croatia, Slovenia and Turkey. It must be noted that for six EU-28 countries (Cyprus, Estonia, Latvia, Lithuania, Luxembourg and Malta), Iceland and the Former Yugoslav Republic of Macedonia no regional data are available.

High-tech statistics are derived from various other domains and sources of Eurostat's official statistics (CIS, COMEXT, LFS, SBS, PATSTAT and R&D). Coverage and availability are therefore dependent on these primary sources.

The sectoral approach is an aggregation of manufacturing industries according to technological intensity (R&D expenditure divided by value added) and is based on the Statistical classification of economic activities in the European Community (NACE) at 2-digit level for compiling aggregates related to high-technology, medium high-technology, medium low-technology and low-technology. Services are mainly aggregated (at NACE 2-digit level) into knowledge-intensive services and less knowledge-intensive services, based on the share of employed people who have undergone tertiary education.

It should be mentioned that, due to the revision of the NACE from NACE Rev. 1.1 to NACE Rev. 2, the definition of high-technology industries and knowledge-intensive services changed in 2008. For high-tech statistics, this means that two different definitions (based on the two versions of NACE) are used in parallel and the data according to each NACE versions are presented in separate tables depending on data availability.

The product approach was created to complement the sectoral approach. The product list is based on the calculations of R & D intensity by groups of products (R & D expenditure divided by total sales). The groups classified as high-technology products are aggregated on the basis of the Standard international trade classification (SITC). The product approach is used for data on high-tech trade.

Due to the revision of SITC from SITC Rev. 3 to SITC Rev. 4, the definition of high-tech products also changed in 2011. The data in this article conform to SITC Rev. 4.

Data on high-tech employment come from the EU Labour Force Survey (LFS). Employed people are defined as persons aged between 15 and 74 who performed work during the reference week, even for just one hour, for pay, profit or family gain, or had a job or business from which they were temporarily absent, e.g. because of illness, holidays, industrial dispute or education and training.

In the context of economic globalisation, technology is a key factor in enhancing growth and competitiveness in business. High-tech industries are expanding most strongly in international trade and their dynamism helps to improve performance in other sectors.

Investment in research, development, innovation and skills constitutes a key policy area for the EU as it is essential to economic growth and to the development of a knowledge-based economy.

Research, development, science and technology have been acknowledged throughout the years since 2000 as factors of growing competitiveness, better and well-paid jobs, greater social cohesion and a smart, sustainable and inclusive economy.

The EU has put in place a framework to measure progress and achievements in relation to the goals identified first in the Lisbon strategy and redefined in the Europe 2020 strategy.

The production and development of statistics on science and technology are governed by Decision 1608/2003/EC of the European Parliament and of the Council. The Decision highlights the need for comparable data on research and development, technological innovation, and science and technology. The aim is to create an information system on science, technology and innovation that can support and monitor the various EU policies implemented in this respect.

Commission Regulation (EC) No 753/2004, which is related to the Decision above, sets out a framework for the standards, definitions and classifications used in the production of statistics on science and technology.

In the light of developments in statistics on science and technology, as well as requests for new, more detailed and more frequent statistics, new implementing measures were laid down in 2012 through Regulation (EU) No 995/2012

The framework for statistics on high-technology industries and knowledge-based services consists principally in making more effective use of existing national and international data sources (including within the European statistical system). This work also involves identifying and classifying activities and products, and measuring the economic performance of these activities and their contribution to the performance of the economy as a whole. Launched in 2010, the Europe 2020 strategy sets out a vision of Europe’s social market economy for the 21st century underpinned by three mutually reinforcing priorities:

The European Commission is further boosting the Europe 2020 strategy with seven flagship initiatives. One of these is the ‘Innovation Union’, supporting ‘smart growth’. The Innovation Union initiative aims to improve the framework for research and innovation in the EU. Over 30 action points have been published.

Moreover, a Commission Communication published in 2010 — ‘Regional Policy contributing to smart growth in Europe 2020' — shows how crucial EU regional funding is to achieving growth, by targeting investment in innovation in all regions. A key element of this is to encourage national and regional governments to design ‘smart specialisation strategies’ to help regions identify their best assets. Concentrating resources on a limited number of priorities will ensure more effective use of public funds and help to raise levels of private investment.

Furthermore, following a request from the European Council, in 2013 the Commission published a Communication on ̒ Measuring innovation output: towards a new indicator.̕ This indicator measures the extent to which ideas from innovative sectors are able to reach the market, providing better jobs and making Europe more competitive. It supports the benchmarking of national innovation policies and shows significant differences between EU countries. This indicator makes use of several of Eurostat’s science, technology and innovation (STI) statistics and concepts.

The Europe 2020 strategy includes trade-opening initiatives for ̒ sectors of the future̕, among them high-tech products and services.