This Statistics Explained article is outdated and has been archived - for recent articles on Environment see here.

This article takes a look at one example of a waste-related environmental impact, the emission of greenhouse gases (GHG) in the European Union (EU) and some EFTA and candidate countries as a result of waste disposal operations such as landfilling, incineration without energy recovery and other treatment operations such as composting. It is widely recognised that managing waste has a range of potential environmental impacts and, as Eurostat collects and collates basic data on waste generation and treatment, the emission of greenhouse gases can be analysed in some detail.

The data were obtained from the European Environment Agency (EEA) and EEA reports prepared for the United Nations Framework Convention on Climate Change (UNFCCC). It should be noted that waste nomenclatures may differ: incineration in this context covers only incineration without energy recovery. 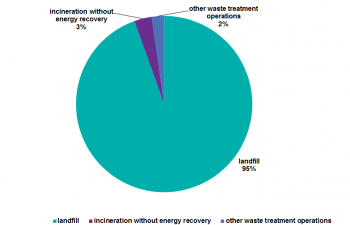 Six greenhouse gases are identified under the Kyoto Protocol: carbon dioxide (CO2), methane (CH4), nitrous oxide (N2O), and three fluorinated gases. More information is available from the European Commission's Directorate-General for Climate Action and the EEA. Data for other countries can be found on the UNFCCC website.

Relevance of the waste sector

The EEA forecasts that emissions from waste disposal will decrease further in the future, despite a steady increase in the overall quantity of waste being generated. This shift stems from the decrease in waste being landfilled in the EU. The waste sector accounted for about 11 % of the cuts in GHG emissions in 2011, which amounts to 1.8 % of total emissions. The waste management sector therefore plays a key role due to the reduction in reliance on landfill for residual disposal - a change that has been significantly influenced by EU waste legislation (see Outlook below).

Official reporting to the Secretariat of the United Nations Framework Convention on Climate Change (UNFCCC) involves a breakdown of emissions from solid waste disposal into three subcategories:

The emissions from landfill sites are not measured but modelled, as detailed in the IPCC guidelines on waste. Methane is emitted from landfill sites as fugitive emissions. The models used take into account the local weather conditions (humidity and climate), which have a high impact on the overall process. A simple model may divide the landfill process into three steps:

Stopping landfill today, therefore, would not put an end to methane emissions immediately and as such, but a slow decline in methane emissions from old landfill sites would become apparent. A key measure to mitigate methane emissions is the capture of the methane, especially during the second phase, and its subsequent combustion to produce energy. Methane is combusted to carbon dioxide, which is not entered in the inventory (organic carbon). In the United Nations Framework Convention on Climate Change (UNFCCC) reporting system, the methane emitted to the atmosphere is entered in the 'accounts'. However, the benefits stemming from energy production from methane gas capture at landfills and the utilisation of this gas are accredited to the energy sector, rather than the waste sector.

During waste incineration, fossil carbon contents (from, oil products such as plastics), are emitted and recorded. Biogenic carbon from paper waste (e.g. newspapers), wood and biowaste is also emitted but not entered in the 'accounts'. Other types of GHG emission are negligible. Emissions from waste incineration with energy recovery are ascribed to 'energy' rather than 'waste'. Therefore, in the event of energy recovery, the extent of such emissions from incineration with energy recovery cannot be established. As a result, a full comparison between different waste treatment operations is not possible because the benefits from improved waste treatment, such as incineration 'with energy recovery' (and the subsequent avoidance of equivalent energy production, e.g. from fossil fuels) are not fully demonstrated in the waste sector under UNFCCC reporting.

Other treatment options, e.g. the composting or fermentation of biowaste and/or mixed waste, and the recycling or pre-treatment of waste for landfill, may give rise to fewer methane or nitrous oxide emissions.

Figure 1 is as a pie chart presenting the estimated proportions of greenhouse gas emissions from the three types of disposal/treatment operation in 2011.

This shows that 95 % of the GHG emissions from waste management come from the landfill sector, while the other two types of operation contribute only 5 %. However, it should be noted that the incineration section includes only facilities without energy recovery so overall only a fraction of incineration emissions are presented in the chart. It is therefore reasonable to focus on landfill.

Time series of GHG emissions from the waste sector 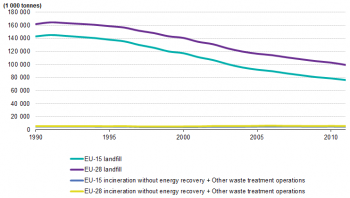 Figure 2: GHG emissions in EU-15 and EU-28 for landfill and the sum of incineration without energy recovery and other treatments from 1990 to 2011 (1 000 tonnes) - Source: EEA GHG data viewer

Products from fossil oil, such as plastics, are assumed not to degrade in a landfill site because of the length of the degradation process. This extends the observation time frame for global warming (usually 100 years). Organic carbon may decay in the presence of oxygen (aerobically) to carbon dioxide or decompose in the absence of oxygen (anaerobically) to carbon dioxide and methane. As methane has a greater impact than carbon dioxide, methane emissions are recorded as anthropogenic emissions.

Figure 2 shows the time series for greenhouse gas emissions from 1990 to 2011. The two smaller subcategories (incineration without energy recovery and other treatments) are summarised. Data is shown for the EU-15 and theEU-28.

In the early 1990’s, greenhouse gas emissions from landfill decreased slowly. Between 1995 and 2005, there was a high rate of reduction, but since 2005 there has been slower progress in cutting emissions. Over the reporting period, total EU-15 emissions from incineration without energy recovery and other treatments have remained quite stable, at approximately 5 million tonnes CO2 equivalent a year. Emissions from incineration without energy recovery are declining, whereas those from other treatment activities are rising and have been at a level of 2.0 million tonnes a year since 2007.

Figure 4 gives an overview of the GHG emissions from landfill in 2011 in the other Member States than EU-15 Member States and the candidate countries.

GHG emissions from landfill in the EU Member States that joined the EU in 2004 and after are in general (with the exception of Romania) higher than, or close to the EU-15 average (in the cases of Estonia, Poland, Croatia, and Slovenia). Only Bulgaria, Cyprus, Slovakia, Malta and Hungary are significantly above the average. Overall, the EU-28 average differs only slightly from the EU-15 average. Iceland and Turkey show significantly higher emissions per capita. 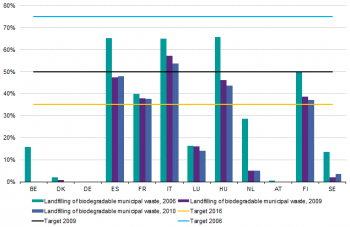 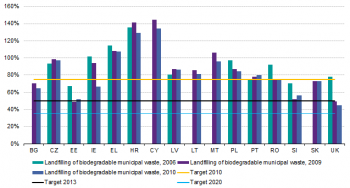 By adopting Landfill Directive 1999/31/EC, the European Union gave itself a powerful tool for reducing the amount of biodegradable municipal waste going to landfill. It is this fraction of the waste that accounts for for methane emissions. The Directive requires the collection and incineration of landfill gas and the monitoring of landfill gas emissions. Flaring is also an option for older landfills, as it neutralises methane emissions (biogenic CO2 is not entered in the 'accounts', but methane is).

Article 5 of the Directive sets targets for reducing the volume of biodegradable municipal waste sent to landfill. These are expressed as percentages of this waste generated in 1995, as follows:

Member States that landfilled more than 80 % of their municipal waste in 1995 may postpone the attainment of these targets by no more than four years. Among the EU-15 countries, the United Kingdom, Ireland and Greece have been granted a derogation period. Among the countries that joined the EU in 2004 or later Hungary is not covered by the derogation.

From the existing Eurostat data it is not possible to track the reduction in biodegradable municipal waste, as only the total amount of municipal waste sent to landfill is monitored. The definition of biodegradable waste, the national strategies for reducing landfill and a limited set of data are published in a report on the implementation of the Landfill Directive. A summary and update on biodegradable municipal waste is given in EEA. The 2006 data is also discussed in the State of the environment report No 5/2010 on Material resources and waste and in the update to the European Environment State and Outlook 2010.

The official greenhouse gas emission inventories for the EU and the individual Member States are submitted to the United Nations Framework Convention on Climate Change (UNFCCC) in two parts:

The report and data are available 15 months after the reporting year has ended. Data for other countries is also documented at the UNFCCC Secretariat.
The EU reports and condensed tables are also available at the EEA. The EEA maintains a combined database ( GHG data viewer).

More information is available from the European Commission's Directorate-General for Climate Action and the EEA.

The Kyoto Protocol is an international agreement that includes legally binding GHG emissions targets for the industrialised countries. It aims to achieve an overall reduction of at least 5 % from 1990 levels in the period 2008-12. The Protocol sets individual targets per country, but the 15 EU Member States (EU-15) at the time it was adopted (1997) agreed to an 8 % reduction and re-distributed this target under the burden-sharing agreement (Council Decision 2002/358/EC).

Bulgaria, the Czech Republic, Estonia, Latvia, Lithuania, Romania, Slovakia and Slovenia also took on the 8% target. Poland and Hungary will have to reduce emissions by 6%. There is no legal EU target for Cyprus and Malta.

The UNFCCC definition of the waste sector differs from, and is narrower than, the definition of waste management in EU waste legislation and the EU Waste Statistics Regulation. This report follows the UNFCCC reporting system and classification.

If the full range of impacts from waste management operations are to be investigated, a different approach is needed. This should take into account all emissions caused or avoided by waste treatment, i.e. direct emissions from all waste treatment types, including recycling, incineration and landfilling; moreover, the recovery of energy ( from incineration, landfill gas and anaerobic digestion plants) and materials (by recycling, composting and anaerobic digestion) primary production of energy (e.g. from fossil fuels) and virgin materials (virgin paper, metals, etc.). In order to demonstrate the full effect of waste management, emissions inventory reporting should take account of the emissions thus avoided. See EEA publication for an example of how this 'life-cyle' approach can be applied to municipal solid wase in the EU.