In the framework of the European System of National Accounts (ESA95), Eurostat collects data on general government expenditure by economic function according to the international Classification of the Functions of Government (COFOG) – see methodological note.

This publication presents for the first time detailed COFOG data on public order and safety for the European countries. This became possible due to progress in the availability and quality of voluntarily transmitted COFOG level II data. 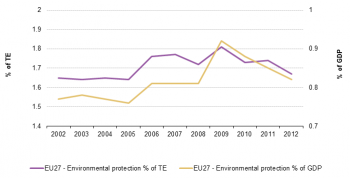 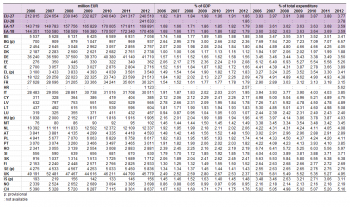 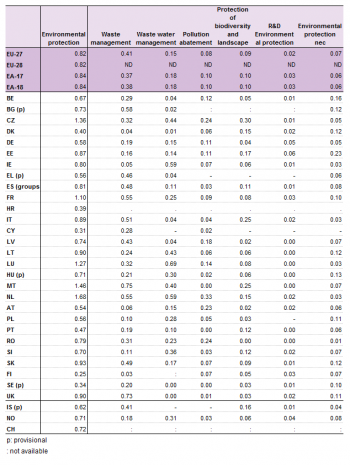 In 2012, EU-27 total general government expenditure amounted to 49.4 % of GDP. Based on the latest available expenditure data by economic function for 2012, 1.9 % of GDP was devoted to expenditure on public order and safety in the EU-27, a slight decrease compared with 2011.

Government expenditure on public order and safety amounted to around EUR 240 billion in 2012 in the EU-27.

The share of expenditure dedicated to public order and safety (Figure 2) has been quite stable since 2002, with the decrease in recent years due to active measure taken by countries to reduce this expenditure, mainly concerning intermediate consumption and capital investments.

It also decreased in absolute terms by around EUR 0.8 billion from 2011 to 2012. While 'compensation of employees' and 'current transfers' continued to grow, 'intermediate consumption' and 'capital investments' decreased. In absolute terms, EU-27 total expenditure on public order and safety increased from 2009 to 2011.

The evolution at the level of the EU masks disparate developments in the EU Member States. While total expenditure on public order and safety decreased by 0.6 percentage points (pp) of GDP in Bulgaria, 0.3 pp of GDP in the Czech Republic and 0.2 pp of GDP in Ireland and Portugal over the 2009 to 2012 period, slight increases were observed in France, Luxembourg, Romania and Finland, as well as in Switzerland among the EFTA countries.

The decreases in Portugal and Slovenia reflect overall falls in the absolute amounts of 'compensation of employees'. In Portugal 'compensation of employees' in absolute terms already decreased in 2010 and 2011, while nominal GDP fell in 2009, 2011 and 2012. Only in 2012 was the decrease in public order and safety expenditure substantially larger than the decrease in GDP, leading to a decline in the % to GDP ratio.

'Police services' has the largest share of expenditure, followed by 'law courts' and 'fire protection services'

The share of expenditures not elsewhere classified is quite low in the majority of countries.

In the EU-27 in 2012, ‘compensation of employees’, for instance on wages and salaries of policemen, firemen, prison staff, judges and paralegals, accounted for the largest share of expenditure on public order and safety in all related COFOG groups (69 % of total expenditure).

Annual government finance statistics (GFS) data are collected by Eurostat on the basis of the European System of Accounts (ESA95) transmission programme. Member States are requested to transmit, among other tables, table 1100, 'Expenditure of general government by function' twelve months after the end of the reference period. Table 1100 provides information about expenditure of the general government sector divided into main COFOG functions and ESA95 categories. The transmission of the COFOG I level breakdown (divisions) is compulsory for the years 1995 onwards, whereas information on the COFOG II level (COFOG groups) is provided on a voluntary basis. The main reference years used in this publication are 2012 as the latest year available and 2002 as the first year for which complete data on expenditure by function are available at EU-27 level.

The data relate to the general government sector of the economy, as defined in ESA95, paragraph 2.68: 'All institutional units which are other non-market producers [institutional units whose sales do not cover more than the 50 % of the production costs, see ESA95 paragraph 3.26] whose output is intended for individual and collective consumption, and mainly financed by compulsory payments made by units belonging to other sectors, and/or all institutional units principally engaged in the redistribution of national income and wealth’.

In the ESA95 system, recording is in principle on an accrual basis, that is, when ‘economic value is created, transformed or extinguished, or when claims and obligations arise, are transformed or are cancelled.'

For country-specific notes, e.g. on missing data, please refer to the metadata published on Eurobase. The authors can be contacted at ESTAT-ESA95-GOV@ec.europa.eu.

In the framework of the European System of National Accounts (ESA95), Eurostat collects data on general government expenditure by economic function according to the international Classification of the functions of government (COFOG) – see methodological note. This publication presents for the first time detailed COFOG data on public order and safety for the European countries. This became possible due to progress in the availability and quality of voluntarily transmitted COFOG level II data.