Data from May 2013. Most recent data: Further Eurostat information, Main tables and Database. 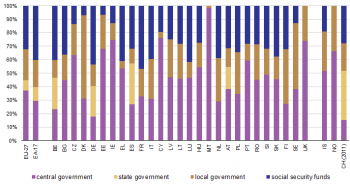 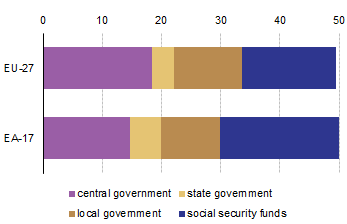 Share of sub-sectors in total expenditure varies between countries

Figure 1 shows that the importance of the sub-sectors varies between countries. In the EU-27 as a whole, central government is the largest sub-sector in terms of expenditure, while among euro area countries, social security funds account for the biggest part of general government expenditure (40.3 % of TE).

In five countries, expenditure and revenue for a state or regional level is distinguished – this concerns the three regions in Belgium, the Bundesländer in Germany and Austria, the comunidades autónomas in Spain and the Kantone in Switzerland.

For the countries that do report state government data, the importance of this sub-sector tends to be relatively high. In 2012, the share in total expenditure ranged between 16 % in Austria and 37 % (2011, latest year available) in Switzerland.

Figure 3: Consolidated total expenditure by sub-sector of general government and by transaction, EU-27 in millions of euro, 2012
Source: Eurostat (gov_a_main)

The largest share of 'intermediate consumption' and 'compensation of employees' is incurred by central and local government, although these are also two important transactions for state government. A large part of 'compensation of employees', when classified by function (COFOG), is attributed to the divisions 'education' and 'health' – together accounting for just under half of this transaction's expenditure (2011 data). For state government, the division 'education' on its own makes up just over half of the total cost of employees, reflecting the state or regional responsibility for education in all of the concerned countries.

The evolution of social transfers is linked to the crisis 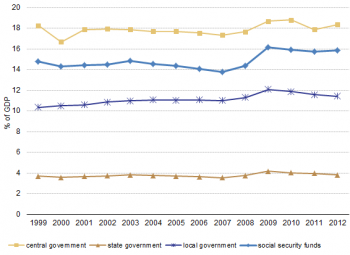 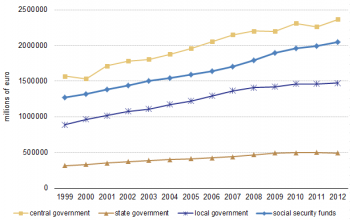 This section gives some background information on the data sources used in the preparation of this publication as well as on the methodological concepts and technical terms and codes used.

Annual government finance statistics (GFS) data are collected by Eurostat on the basis of the European System of Accounts (ESA95) transmission programme, in table 0200 'Main aggregates of general government', table 0900 'Detailed tax receipts by sector' and table 1100 'General government expenditure by function'. As all GFS data are compiled within the ESA95 framework, they follow all methodological guidelines set out in ESA95 and the common rules adopted for national accounts. The legal requirement for transmission of table 0200 data is at t+3 and at t+9 months after the end of the reference period. In this publication data corresponds to the end-March/ April 2013 transmissions of table 0200.

The data relate to the general government sector of the economy, as defined in ESA95, paragraph 2.68: 'All institutional units which are other non-market producers (institutional units whose sales do not cover more than the 50 % of the production costs, see ESA95 paragraph 3.26) whose output is intended for individual and collective consumption, and mainly financed by compulsory payments made by units belonging to other sectors, and/or all institutional units principally engaged in the redistribution of national income and wealth. General government comprises the sub-sectors central government (S.1311), state government (S.1312 - where applicable), local government (S.1313), and social security funds (S.1314). State government data is reported for BE, DE, ES, AT and CH -please see country codes). Data for social security funds is not reported for MT, UK and NO, for the latter two S.1314 data is included in S.1311.

where P.51, 'gross fixed capital formation': consists of acquisitions, less disposals, of fixed assets during a given period plus certain additions to the value of non-produced assets realised by the productive activity of producer or institutional units (fixed assets are tangible or intangible assets produced as outputs from processes of production that are themselves used repeatedly, or continuously, in processes of production for more than one year);

where D.41, 'interest': excludes settlements under swaps and forward rate arrangements, as these are treated as financial transactions in the ESA 95;

In the ESA95 system, recording is on an accrual basis, that is, when ‘economic value is created, transformed or extinguished, or when claims and obligations arise, are transformed or are cancelled.'

Throughout this article nominal GDP, i.e. GDP at current prices, is used.

More data can be found in Eurostat's online database under the theme economy and finance. Users might also like to refer to the integrated GFS data publications, which present GFS data in a user-friendly fashion are published shortly after transmissions of annual and quarterly data. For country-specific notes, including on missing data, please refer to the metadata published on Eurobase. In case of questions the authors can be contacted at ESTAT-ESA95-GOV@ec.europa.eu. The GFS tables are also compiled as an Excel publication by sub-sector of general government, please see Annual GFS tables - Excel publications.