In 2011, intermediate products accounted for more than half of the world’s trade.

Between 2001 and 2011, a growing share of the EU’s value added was attributed to imports of intermediate goods. 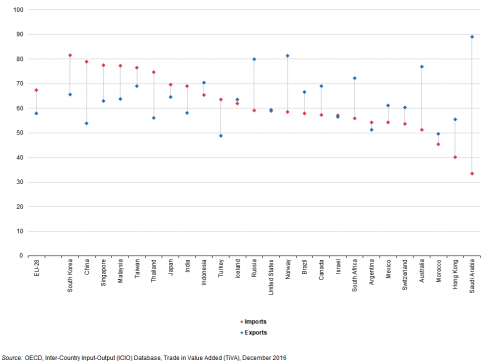 This article provides information relating to global value chains, a term used to describe the full range of activities undertaken to bring a product or service to market, in other words, the journey from its conception to final use, including research and design, production, marketing, logistics and distribution. These steps in the production chain may be performed by the same enterprise, or alternatively can be carried out by different enterprises which in turn may be located in a number of different countries, potentially leading to the development of intricate networks of globalised activity, with an increasing share of products being ‘made in the world’.

Enterprises have been producing items with intermediate inputs sourced from around the world since the industrial revolution. However, as global value chains developed they accentuated the speed, scale, depth and breadth of such global interactions. These chains are often viewed as powerful drivers of productivity growth and efficiency gains, although they also have the potential to impact upon jobs — threatening them in countries which see parts of their production chain outsourced, and creating them in countries which receive the reallocated productive capacity. The scale of complex international production networks may be measured insofar as the United Nations estimates that around half of world’s trade in goods and services takes place between affiliates of multinational enterprises.

Globalisation has led to a fragmentation of global value chains: this pattern has been particularly apparent within the manufacturing sector, for example, in relation to activities involving assembly, as multinationals seek to benefit from lower labour costs. More recently, a similar pattern of developments has emerged in relation to the remote provision of some technology, communications and support services, such as computer programming, call centres or helpdesks.

In 2011, intermediate products accounted for more than half of the world’s trade

According to the United Nations, more than half of the world’s trade concerns intermediate products (for example, parts and components that are used as part of the manufacturing process when producing final goods for end-consumers). Within the EU-28, there has been a relatively slow and stable development concerning the proportion of trade that may be attributed to intermediate products. In 2011, intermediate goods accounted for 67.4 % of the EU-28’s imports and 57.8 % of its exports (see Figure 1).

While some studies on global value chains focus on the role of emerging economies as low-cost production hubs, such value chains could not exist without the development of a wide range of support services (such as transport networks, logistics, finance, communications or business/professional services) too. Indeed, when measured in value added terms, the role of these services in the global economy is generally considered to be much greater than might be suggested by analysing gross international trade statistics.

There are a range of measurement issues concerning the accurate compilation of statistics on global value chains. For example, a bias may be introduced if attributing the full value of imports to the last country of origin, as the product/service being imported is composed of intermediate goods that were sourced from other countries. As such, international trade analyses based on gross measures may struggle to provide an accurate measure of the complexities involved in global production chains, as intermediate goods (parts and components) may cross borders several times and each time this occurs their value is counted, thereby potentially inflating trade statistics.

Statisticians are facing these challenges by developing more robust and reliable measures — for example, combining enterprise-level microdata with the results of existing international trade and business surveys — so as to facilitate the compilation of more accurate information which may then be used for a broader understanding of the globalised economy. This work has been coordinated at a global level by the OECD through its Trade in Value Added (TiVA) initiative. It takes on board regional initiatives including, Eurostat’s Full International and Global Accounts for Research in Input-Output Analysis (FIGARO) project, North American TiVA, Asia-Pacific Economic Cooperation (APEC) TiVA, or regional input-output tables for Latin America coordinated by the Economic Commission for Latin America and the Caribbean (ECLAC). These initiatives provide a means to factor out the multiple counting that is implicit in gross flows of international trade and instead measure specifically the value that is added at each stage of the production process to any goods/services that are exported.

One of the key pillars underlying the development of TiVA initiatives is the creation of a global set of multi-partner supply, use and input-output tables. These should allow a better understanding of global value chains, extending traditional statistics — such as economic accounts — so that inter-dependencies and linkages between different economies may be studied in more detail.

Between 2001 and 2011, a growing share of the EU-28’s value added was attributed to imports of intermediate goods

Figure 2 extends the analysis by providing details about the share of domestic value added in total gross exports. In 2011, some 71.6 % of the value added contained in EU-28 gross exports was generated within the single market; the remainder was contained in intermediate goods that were imported from non-member countries. The share of EU-28 domestic value added in gross exports fell between 2001 and 2011, suggesting that the EU was becoming increasingly open, importing a higher share of intermediate goods/services to feed into its production chains.

Those economies which were relatively specialised in raw material and minerals production — for example, Saudi Arabia, Brazil, Indonesia, Russia or Australia — tended to record a high share of domestic value added in their gross exports. By contrast, economies characterised as low-cost production centres for manufacturing — for example, many of the Asian countries, Mexico, Turkey or Morocco — reported relatively low shares of domestic value added in gross exports (shares below 75 %).

These patterns may arise because the bulk of the added value that is embedded in products/services tends to reside at either end of the production chain, for example, within research and development (R & D) activities at the start of the chain or within branding/marketing activities at the end of the chain, whereas activities such as assembly generally have a relatively low added value. As an example, a smartphone might have its R & D, design, intellectual property, advertising and sales functions based in the United States, component suppliers in Japan and South Korea, while it is assembled in China or Vietnam. While the bulk of the added value may reside at either end of the production chain, the creation of products/services through multi-enterprise production chains spreads some of the economic value away from the enterprise whose brand appears on the product packaging to other participants in the chain. 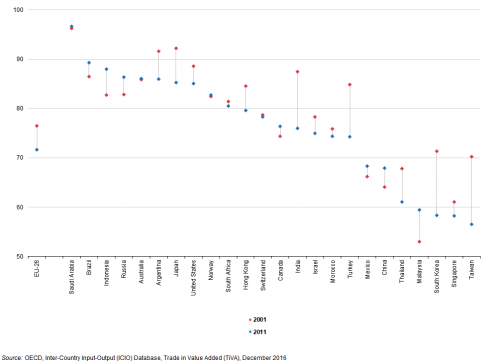 The share of the EU-28’s domestic value added in its gross exports to a range of bilateral trading partners is shown in Figure 3. The most striking aspect is that the share of domestic value added in gross exports declined for each of the EU’s main trading partners between 2001 and 2011, providing further support to economic views that emphasise the increasing fragmentation of production to all corners of the world and the spread of globalisation. 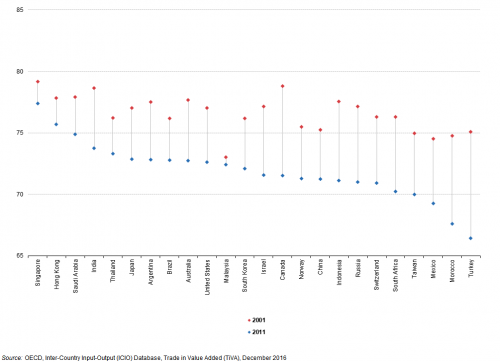