This Statistics Explained article is outdated and has been archived - for recent articles on globalisation see here.

Most of the foreign affiliates, however, are located within Europe and are found more often in the manufacturing sector than in the services sector. Furthermore there is no evidence of substantial movement of knowledge-intensive business functions to destinations outside Europe. The business function with the highest share of employment in foreign affiliates is marketing and sales, indicating enterprises' desire to establish a commercial presence in foreign markets.

This article is part of an online publication on Microdata linking in business statistics.

Figure 3: Foreign affiliate employment abroad as a proportion of combined employment in manufacturing and services sectors, 2011

Figure 7: Core business function employment in foreign affiliates, by location and sector of the reporting enterprise, 2011 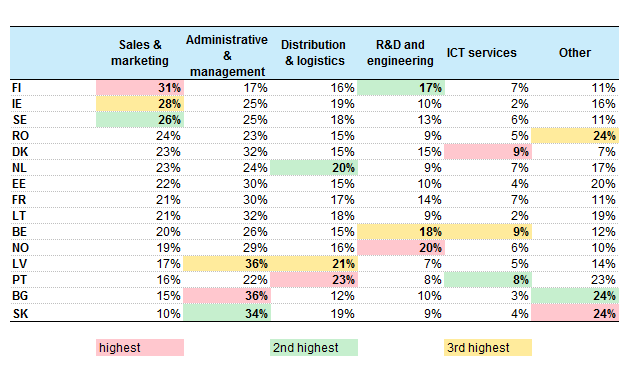 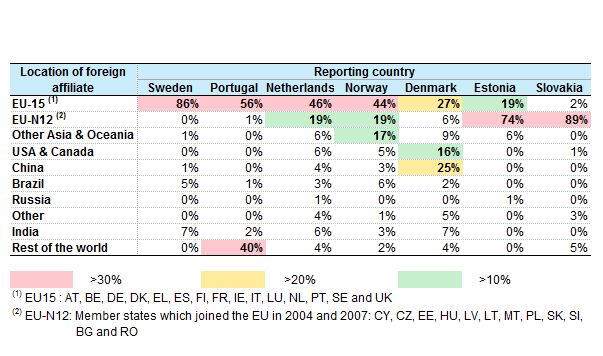 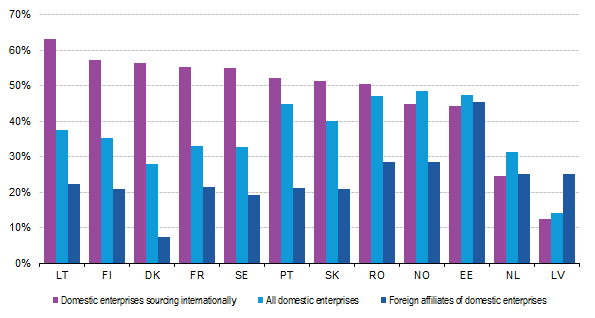 The main findings of the analysis are:

Globalisation has been driven mainly by multinational manufacturing enterprises fragmenting their value chains by sourcing both production and support activities globally. Developments in technology and communication have been important drivers in this process and consequently the international organisation of services has also grown. Overall, however, far fewer services enterprises than manufacturing enterprises have established foreign affiliates. Roughly 20 % of Danish, Finnish and Dutch services enterprises control affiliates abroad, but typically the proportion is just over 10 % (see Figure 1).

Figure 2 provides another view of the same data. It shows one group of countries is clustered around the black line where the percentage of enterprises controlling foreign affiliates is roughly the same for Services and Manufacturing and a second group of countries clustered around the grey line where the percentage in Manufacturing is twice as high as in Services.

Business functions to support the execution of core functions comprise an integral part of the value chain for both manufacturing and services enterprises. Support functions have ‘services-like’ characteristics and relate to pre-production (e.g. R&D or logistical support) and post-production (e.g. sales & marketing). A few support functions account for the highest proportions of total support function employment in foreign affiliates (see Figure 8). The main one is ‘sales & marketing’, which typically covers 30-60 % of all employment in support functions (as much as 80 % in the case of Portugal). This suggests that a key driver for establishing foreign affiliates is having a commercial presence abroad.

Knowledge-intensive jobs are of particular interest, because they are crucial for maintaining and improving the competitiveness of European economies and thus the well-being of European societies. The list of support business functions used in the survey therefore specifically identifies knowledge intensive support functions such as R & D and engineering. Below we analyse the location pattern of such functions in foreign affiliates. A general observation is that employment in R&D and engineering support functions is located in the EU (see Table 2). For all participating countries except Denmark, over half of those employed in enterprises’ foreign affiliates work in other EU countries. Danish enterprises are frequently present, through their foreign affiliates, in China, the USA and Canada. Portuguese enterprises employ significant numbers in R & D and engineering outside the EU, often in Africa.

The locations of affiliates’ R & D and engineering employment vary greatly across the participating countries. In the case of Swedish, Portuguese and Dutch enterprises, they are often based in other ‘EU-15’ countries, whereas for Estonia and Slovakia they are more likely to be working in other Member States that joined the EU in 2004 and 2007.

Effects of the economic crisis

Domestic employment most affected by the economic crisis

The impact of the crisis is reflected in Figure 9, which shows the proportions of different types of enterprises reporting a fall in the number of people they employ. Due to the economic crisis, 2009-11 has generally been characterised by enterprises employing fewer people and this is reflected especially in enterprises sourcing internationally. In eight out of 12 countries, over 50 % of such enterprises reported a decreasing number of jobs. Only in the Netherlands (24 %) and Latvia (12 %) were the proportions considerably lower.

In today’s economy, enterprises increasingly organise their production globally by sourcing activities to foreign affiliates or external providers. The cross-border restructuring of business functions is a key feature of European businesses. It poses challenging questions for policy makers, and there is therefore a big demand for adequate statistical data.

In 2012, 15 European countries gathered data on the international organisation and sourcing of business functions. The survey covered nearly 40 000 European enterprises employing at least 100 persons in the non-financial business economy. This represents 17 million persons employed, or around 38 % of all employment in the non-financial business economy in the countries in question. The results presented here focus on the organisation of business functions between enterprises and their foreign affiliates (see methodological notes). The survey was a revision of the first survey conducted in 2007 in which 14 national statistical institutes participated.

Enterprises were asked to estimate how many people they employed and whether the numbers had increased, decreased or remained unchanged in 2009-11. They also provided details on how employment was distributed across the various business functions. They answered the same questions for their foreign affiliates (if applicable), regardless of their size, and the location (broad geographical region) of the affiliates was also recorded.

This article does not cover foreign affiliates other than those linked to enterprises in the survey population. Also, the graphs do not always show results from all participating countries due to differences in national questionnaires, data quality or confidentiality restrictions.

The data presented in this article are from a survey on "International organisation and sourcing of business activities". The data, which cover the period 2009-2011, has been collected in 15 countries:

The international sourcing statistics cover NACE Rev.2 (Statistical classification of economic activities in the European Community) sections B to E and F to N excluding K which, broadly speaking, cover non-financial market activities. The data refers to enterprises with 100 or more persons employed.

A new and important feature of globalisation is that enterprises split their production processes into a number of business functions which they then move around the world to gain efficiency and/or new markets. This is called international sourcing. International sourcing is not only about moving manufacturing core functions from EU-15 to the Member States which joined the EU in 2004 and 2007. It is increasingly about moving these functions out of the EU to new emerging markets. This can be done either through foreign affiliates or to unaffiliated enterprises.

Additionally, development within information and communication technologies in the last decades has enlarged the sourcing model to include service functions and service sectors of the economy.