This Statistics Explained article is outdated and has been archived - for recent articles on globalisation see here.

Foreign-controlled enterprises play an increasingly important role in the economies of many developed and developing countries, with the level of foreign direct investment consistently increasing over the past few decades.

Through receipt of the foreign direct investments, foreign-controlled firms are able to undertake activities that can significantly contribute to the welfare of the host economy, in which they are resident. However, during the challenging economic circumstances the foreign-controlled companies can equally lead to disinvestments and reductions in economic indicators, such as creation of value or productivity. 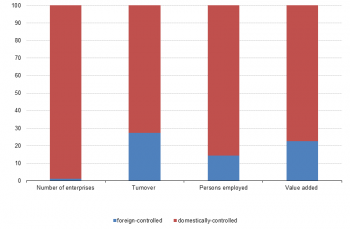 There is competition among countries to attract affiliates of multinational enterprises as there is a general perception that the affiliates are normally better equipped to resist difficult financial times because through their parent companies they enjoy superior assets, greater market power and lower costs of capital compared to local unaffiliated companies.

Foreign affiliates are getting more and more important in the global economy as companies that internationalize are spreading costs across the world as well as they bring greater range of products to consumers. In order to stay competitive, companies are under constant pressure to decrease costs, increase product quality and create innovative solutions. As a result of this global phenomena, multinational enterprises (MNEs) have evolved and risen as important contributors to the world economy. In particular, European-controlled companies play a key role in the global world.

The collection of the FATS statistics based on a harmonized methodology started following the adoption of the so-called FATS-Regulation, with 2007 as the first reference year. One of the most important concepts to be followed when looking at the European statistics is that FATS should be compiled according to the ultimate controlling institutional unit (UCI) concept. The UCI means the institutional unit (enterprise, branch or natural person), proceeding up a foreign affiliate's chain of control, which is not controlled by another institutional unit.

Foreign-controlled companies at the EU level 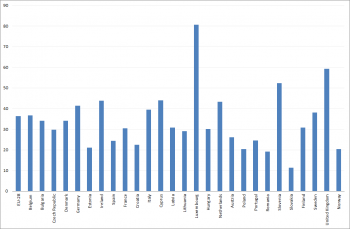 Figure 2: Share of foreign-controlled companies controlled by a non-EU country, in %

Foreign-controlled and controlling companies at the Member State level

If looking at the Member-States-level results, one can observe a high variation of the share of foreign-controlled enterprises across the Member States.

For a large majority of foreign-controlled companies, the controlling country is often resident in some of the other EU Member States, which points out the importance of the Single Market. However, in a few Member States, a comparatively large proportion of foreign-controlled companies are controlled by a non-EU country. This is the case for Luxembourg, where for around 80% of foreign-controlled companies the parent company is resident in a non-European country, while on the other side of the scale Slovakia marks 11% for enterprises controlled from outside EU. Among other reasons, favourable tax rates may attract companies to establish their affiliates there. It is also obvious that many European enterprises are often active in the neighbouring countries: such as France for Belgium, Slovakia for the Czech Republic, Cyprus for Greece, Germany for Austria, Spain for Portugal, or Sweden for Finland. The attractiveness of neighbouring countries might be explained by geographical proximity or by knowledge of the region, little language barriers and good political relations.

For the non-European destinations as a country of residence of foreign affiliates, it is the United States that were the principal destination in terms of turnover for both the United Kingdom and Germany. The close link between the UK and the US can be explained by their strong historical and economic ties. In relation to the number of enterprises, Germany is the biggest European investor in China.

In some selected Central European economies, such as Estonia, Romania and Slovakia, the foreign-controlled companies play a substantial role in the economic performance in their economies. At the other end of the scale, foreign-controlled enterprises in Cyprus and Italy make the smallest contributions to their economies across all indicators. The impact on the labour market defers from country to country, however, the general trend is that in Europe, the majority of persons is employed by EU-controlled companies and not by those controlled from outside EU. The only exception is the United Kingdom, where more than 2 million people work for affiliates owned by a non-EU country, while 1,2 million people work for the EU-controlled foreign affiliates.

Luxembourg has the highest proportion of people employed by foreign affiliates, accounting for 41 % of the total employment in the country, closely followed by Estonia with 37%. At the other end of the scale, the ratio for Italy, Cyprus and Portugal was beyond 10%. Taking only affiliates controlled from outside the EU into account, these figures ranged from 17 % for Luxembourg and 11 % for the United Kingdom to around 1,5% for both Croatia and Cyprus. When looking on the labour market outside the compiling economies, British affiliates were by far the biggest employer outside Europe, followed by France and Germany.

To collect the FATS statistics, all sources can be used that are considered to be relevant and appropriate. However, despite the fact there are different ways to collect data, it is usually the case that business registers, statistical surveys or already existing data from administrative sources are the main data sources in the FATS statistics. Information on foreign control and the country of the Ultimate Controlling Institutional Unit, which is frequently (although less accurately) referred to as the ‘parent company’, may be obtained by linking with other available data sources: annual reports, internet, or by surveying enterprises. Using data from administrative sources helps to reduce the response burden on businesses.

Statistical Business Registers fulfil a crucial function as they provide a basis for identifying the relevant enterprises to be surveyed. This is because they may offer important information about control and ownership of foreign affiliates listed in these registers. Business registers themselves are generally fed from a number of different sources, such as tax registers, social security sources or other public sector data. Another advantage is that there is a considerable degree of harmonisation of statistical Business Registers among the European Member States.

The EuroGroups Register is a network of business registers coordinated by Eurostat. It is expected to become a single platform supporting the production of statistics on globalisation as it provides an EU-wide register on multinational enterprise groups and their affiliates.

European Union plays a crucial role in establishing businesses, creating jobs at home and abroad, as well as in setting up global supply chains. Investment and trade are inter-dependent and complementary as around half of world trade takes place between affiliates of multinational enterprises that exchange intermediate goods and services. Foreign companies established in the EU bring many benefits for the host countries such as creating jobs, optimizing resource allocation, transferring technology and skills, increasing competition and boosting trade. This explains why EU Member States make significant efforts to attract foreign investment. Governments, if they decide so, can attract foreign investment into sectors where it is needed.

On the other side, the foreign affiliates of European companies have a significant impact on the global economy. The activities of the EU controlled affiliates abroad have a positive and significant contribution to the competitiveness of European enterprises, notably in the form of higher productivity.

Therefore, Foreign Affiliates Statistics (FATS), are increasingly relevant to the formulation of the EU's economic policies as they provide information on the role that European capital plays in the world’s economy, especially in terms of sales and employment.

In 1994, the United Nations Statistical Commission established a task force to develop a 'Manual on statistics of international trade in services' (MSITS) that would provide guidelines for definitions, classification and coverage for statistics in this area. It also provides guidance and assistance to countries in the implementation of the recommendations contained in the manual, with particular emphasis on the compilation of statistics on foreign affiliates trade in services. The manual was revised in 2010 in order to incorporate important changes in related international standards (BPM6, BD4). MSITS 2010 is available online. The task force comprises Eurostat, the International Monetary Fund (IMF), the Organisation for Economic Co-operation and Development (OECD), the United Nations Statistical Division (UNSD), the United Nations Conference on Trade and Development (UNCTAD), and the World Trade Organization (WTO), with the OECD as chair and secretariat.