This Statistics Explained article is outdated and has been archived - for recent articles on agriculture see here.

This article presents data relating to fertiliser consumption and nutrient balances within the European Union (EU). Around 40 % of the EU-27’s land area is farmed, highlighting the importance of farming for the EU’s natural environment. Links between the natural environment and farming practices are complex: farming has contributed over the centuries to creating and maintaining a variety of valuable semi-natural habitats within which a wide range of species rely for their survival; on the other hand, inappropriate agricultural practices and land use can have an adverse effect on natural resources, through the pollution of soil, water and air, or the fragmentation of habitats and a subsequent loss of wildlife. 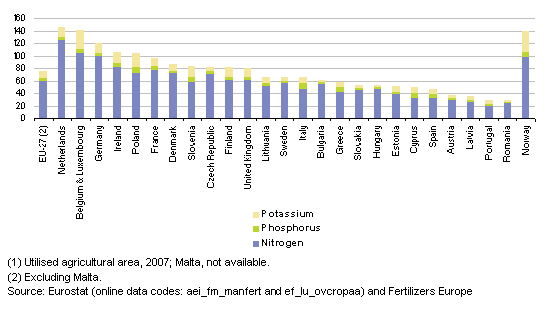 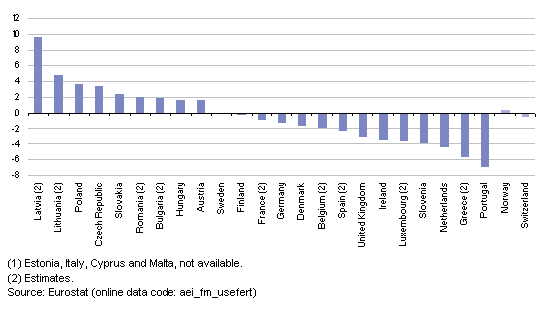 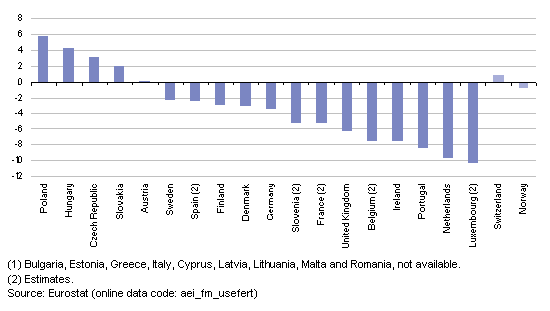 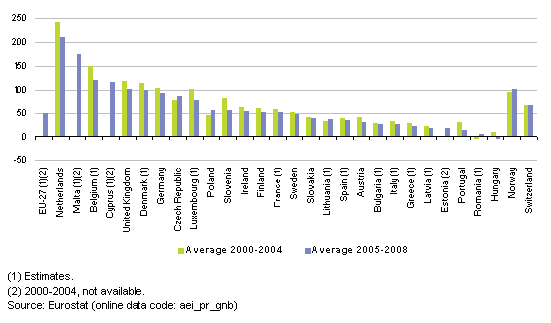 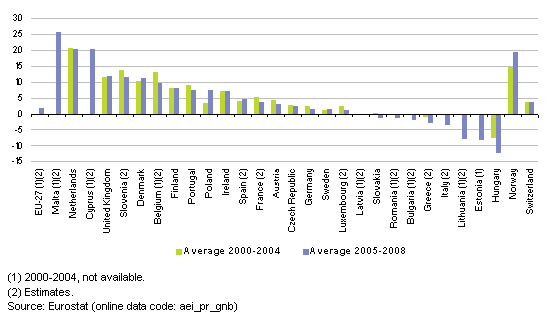 Figure 1 shows the estimated consumption of manufactured fertilisers in terms of the quantity of nutrients applied to each hectare of utilised agricultural area (UAA). Total consumption in the EU (excluding Malta) was estimated at an average 76 kg of nutrients (nitrogen, phosphorus and potassium together) per hectare in 2009 (see Figure 1).

A persistent surplus of nutrients indicates potential environmental problems, such as nutrient leaching (resulting in pollution of drinking water and eutrophication of surface waters), ammonia emissions (contributing to acidification, eutrophication and atmospheric particulate pollution), or emissions of nitrous oxide (a greenhouse gas). A persistent deficit in nutrients indicates, among others, a risk for declining soil fertility.

The gross nitrogen balance for the EU-27 averaged 51 kg of nitrogen per hectare of agricultural land during the period 2005 to 2008 (see Figure 4), ranging from 210 kg per hectare in the Netherlands to -4 kg per hectare in Hungary. The nitrogen balance was generally lower among those Member States that joined the EU in 2004 or 2007, as well as in southern Europe (other than Cyprus and Malta). Comparing the average nitrogen balance for the period from 2000 to 2004 with that for 2005 to 2008, the biggest reductions in the nitrogen balance were often recorded among those Member States that reported some of the highest nitrogen surpluses; this was particularly the case for the Netherlands and for Belgium. On the other hand, there were some countries that reported an increase in their nitrogen surpluses, most notably, Poland, Romania and the Czech Republic.

The gross phosphorus balance for the EU-27 was almost at parity during the period 2005 to 2008 (see Figure 5), averaging 1.8 kg of phosphorus per hectare of agricultural land; in part this lower surplus reflected the lower use made of phosphorus-based fertilisers when compared with nitrogen-based fertilisers. The phosphorus balance ranged from 25.5 kg per hectare in Malta to -12.2 kg per hectare in Hungary. A similar pattern (to that for nitrogen balances) was observed for the phosphorus balance, with Malta, Cyprus and several countries in north western Europe having the highest surpluses, while a deficit was recorded in eight of the Member States (all of which were either Member States that joined the EU in 2004 or 2007 or countries from southern Europe). Comparing the average phosphorus balance for the period from 2000 to 2004 with that for 2005 to 2008, the biggest reductions in the phosphorus balance were generally recorded among those Member States that reported some of the highest phosphorous surpluses; in particular, Belgium, Slovenia and the Netherlands. On the other hand, there were only two countries that reported an increase in their phosphorus surplus over the period under consideration – Poland and Norway.

Data on the estimated consumption of nutrients contained in manufactured fertilisers were provided by Fertilizers Europe, the European trade association of fertiliser manufacturers. The methodology used for the collection of these statistics is harmonised across countries and was developed as a forecasting exercise within the industry. It relies on the estimation of application rates by crop at a national and sometimes regional level by experts; figures are then multiplied by estimated cropping areas. The estimates for total consumption are reconciled with the quantities of fertilisers that are actually sold; allowance is made for changes in stocks causing differences between sales and consumption. Annual data are available for nearly all EU Member States, as well as Norway. Data on fertiliser use are broken down by nutrient type: nitrogen (N), phosphorus (P), phosphate (P2O5), potassium (K), potash (K2O).

Official data on the quantities of nutrients contained in fertilisers were generally provided by national statistical offices (for Luxembourg they were provided by the Ministry of Agriculture). The data were provided under the framework of the Joint Eurostat/OECD Questionnaire on agri-environmental indicators and of the Eurostat/OECD gross nutrient balances data collection exercise. At present no harmonised European statistics on mineral fertiliser use are available from official sources. As such, different data sources were used to compile the dataset and therefore comparability may not be high. Some countries have carried out farm surveys, others have estimated consumption from statistics on production and trade of mineral fertilisers.

Inputs for the gross nutrient balance include fertilisers (both organic and inorganic), manure production (animal excretion), manure withdrawals (exports, processed as industrial waste, non-agricultural use, etc.), changes in manure stocks and manure imports. Other inputs include seeds and planting material, atmospheric nutrient deposition and (for nitrogen only) biological fixation by leguminous crops (such as clover, soya beans, etc.).

Outputs of the gross nutrient balance include harvesting crops (for example, cereals, dried pulses, root crops, industrial crops, vegetables, fruit), the harvest and grazing of fodder (from arable land, permanent and temporary pasture), crop residuals removed from the field. Nutrient inputs and outputs are estimated for each item of the balance by multiplying basic data (such as crop area, crop production, livestock numbers) with coefficients to convert the data into nutrient contents.

Fertilisers contain important nutrients, such as nitrogen (N), phosphorus (P) and potassium (K), which plants absorb from the soil for their growth. Fertilisers are often considered as an essential input in agricultural production. In addition to livestock manure (which may be used as an organic fertiliser), most non-organic farms also apply large amounts of manufactured mineral fertilisers. When the amount of fertiliser applied exceeds the plants’ nutritional requirements, there is a greater risk of nutrient losses from agricultural soils into ground and surface water. The resulting higher concentration of nutrients (eutrophication) can cause serious degradation of ecosystems. In addition to the problems associated with eutrophication, fertilisers may also have adverse environmental effects resulting from their production processes. More specifically, nitrogenous fertilisers — the most commonly consumed fertilisers — require large amounts of energy to be produced leading potentially to higher levels of greenhouse gas emissions. In a different way, phosphorus and potash fertilisers also have an environmental impact, since the raw materials used to produce them are mined, therefore potentially leading to landscape destruction, water contamination, excessive water consumption or air pollution.

The gross nutrient balance provides an insight into the links between agricultural nutrient use, losses of nutrients into the environment, and the sustainable use of soil nutrient resources. In order to estimate the risk of nutrient loss, the consumption of manufactured fertilisers should be combined with other nutrient inputs. In addition, the nutrient requirements (and hence consumption) of plants are influenced by previous land management, soil type and climatic factors, and they vary from one crop to another.

The gross nutrient balance only provides an indication of the potential risks to the environment (air, water and soil), as the actual risks depend on a range of factors including climatic conditions, soil type and characteristics, soil saturation, and management practices such as drainage, tillage and irrigation. The gross nutrient balance may be used to represent the difference between nutrients applied to the soil and nutrients removed by crops; it reflects the risks associated with nutrients either leaching into the soil and water or being released into the atmosphere.

The complex relationship between agriculture and the environment has resulted in environmental concerns and safeguards being integrated within the EU’s common agricultural policy (CAP), with particular attention being paid to reducing the risks of environmental degradation through cross-compliance criteria (as a condition for benefiting from direct payments, farmers must comply with certain requirements, some related to environmental protection) and targeted agri-environmental measures, in order to enhance the sustainability of agro-ecosystems.

In order to limit the environmental damage associated with excess nutrient application, such as eutrophication, a number of legislative measures have been taken, such as the adoption of the nitrates Directive and the water framework Directive, covering the designation of nitrate-vulnerable zones where Member States have imposed regulatory limits on the load and timing of fertiliser spreading on agricultural land.