Archive:Farmers in the EU - statistics

This Statistics Explained article is outdated and has been archived. For more recent articles on agriculture statistics see here.

This article describes the everyday life of farmers in the EU. It focuses on socio-economic characteristics of farmers such as age, gender and level of education. It also presents in detail different features of the work on farms. Finally it concentrates on the rural areas – the areas where most farmers live. It is part of a set of statistical articles based on the Eurostat publication Agriculture, forestry and fishery statistics 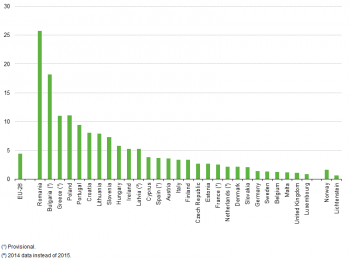 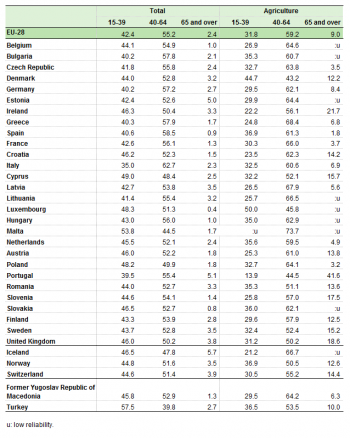 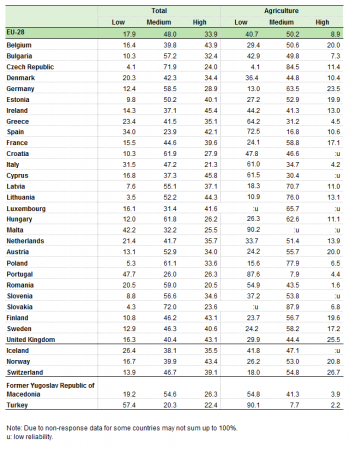 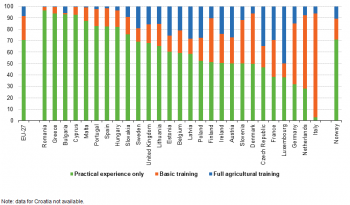 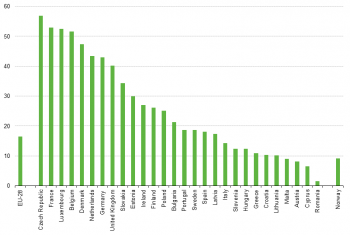 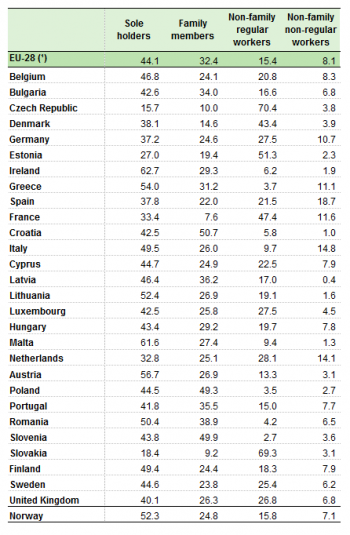 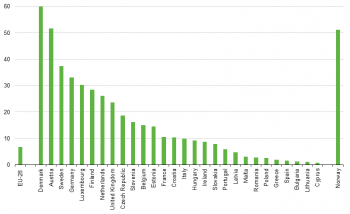 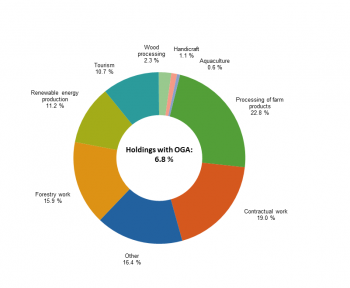 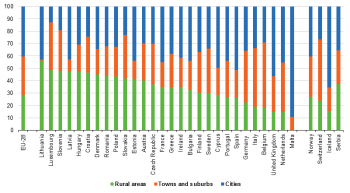 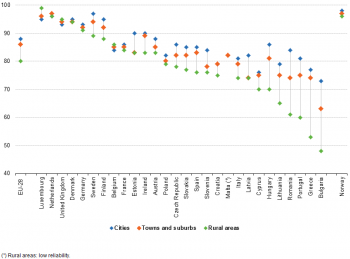 In the EU-28 around 10 million people work in agriculture

According to the national accounts around 10 million people worked in agriculture in the EU-28 in 2015 and accounted for 4.4 % of total employment. Almost three quarters (72.8 %) of the agricultural workforce in the EU-28 was concentrated in seven countries: Romania, Poland, Italy, France, Spain, Bulgaria and Germany.

Agriculture was the main component of the primary sector in all Member States. In the national accounts this sector is composed of three activities: agriculture (crop and animal production, hunting and related service activities), forestry and lodging as well as fishing and aquaculture. However, the proportions of people employed in forestry and fishing were very small in majority of Member States. Employment in forestry exceeding 20 % of the employment in the primary sector was reported in Sweden (40.2 %), Slovakia (34.7 %), Estonia (29.2 %), Latvia (24.5 %) and Finland (20.8 %). Employment in fishing activities did not reach 5 % of primary sector employment in any country but Malta (23.9 %) and Spain (5.2 %).

The highest proportions of young people (below 40 years old) in the agricultural labour force were reported in Luxembourg (50.0 %) and Denmark (44.7 %) and the lowest in Portugal (13.9 %). People aged 65 and above accounted for over 15 % of farm workers in six Member States, with the highest levels reported in Portugal (41.6 %) and Ireland (21.7 %). More than half of farmers were aged between 40 and 64 in all countries but Luxembourg, Portugal and Denmark.

In the EU-28 women account for 35.1 % of the agricultural workforce

The 2016 LFS shows that the proportion of women working in agriculture across the EU was much smaller than their share of the total working population (35.1 % against 45.9 %). Women accounted for more than 40 % of the agricultural workforce in only five Member States, namely Austria (44.5 %), Romania (43.1 %) Poland, Greece and Slovenia (41.1 % in each of three countries). By contrast, the lowest proportions of women farmers were reported in Denmark (19.9 %) and Ireland (11.6 %).

In addition, in 2013, far fewer women than men were managers in the agricultural sector. At EU-27 level (data for Croatia was not available) less than one third (27.9 %) of farm managers were women. Women accounted for fewer than half of farm managers in all Member States; the highest proportions were reported in Lithuania (47.1 %) and Latvia (45.2 %). In Finland, Malta, Germany, Denmark and the Netherlands the proportion of female farm managers did not exceed 10 %.

Half of people working in agriculture reach medium level of education

Among people working in agriculture more than 50% had a low level of education in seven Members States; the highest shares, exceeding 85 %, were reported in Malta (90.2 %) and Portugal (87.6 %). The lowest proportions were observed in the Czech Republic (4.1 %). The proportion of tertiary graduates among people working in agriculture ranged from 1.6 % in Romania up to 25.5 % in the United Kingdom.

In the EU-28 8.6 % of farm managers followed full agricultural training

In the Netherlands and Germany more than 50 % of farmers had basic agricultural training (64.2 % and 53.2 %, respectively). By contrast, fewer than 10 % of farmers had that kind of training in Cyprus, Greece, Romania and Bulgaria.

As for full agricultural training, the highest proportion was in Luxembourg, where half of all farm managers had such training. It was followed by the Czech Republic, France, Latvia, Poland, Austria and Estonia, all of which had proportions higher than 25 %. The lowest proportions, of less than 1 %, were reported in Malta, Greece, Cyprus and Romania.

According to the 2013 FSS, around 22 million people worked regularly in agriculture in the EU-28, but only 16.4 % of them worked on a farm full time. The proportion varied from slightly over 50 % in the Czech Republic, France, Luxembourg and Belgium to less than 10 % in Malta, Austria and Cyprus. Romania had the lowest proportion, with only 1.5 % of people engaged in agricultural work full-time. To estimate the actual volume of work devoted to farming, these figures are converted to full-time work equivalents (measured as annual work units (AWUs)).

Converted into AWUs, the equivalent of 9.5 million people worked full time on farms in the EU-28 in 2013. Family labour represented 76.5 % of the total (44.1 % sole holders and 32.4 % family members), 15.4 % were regular non-family workers and 8.1 % were non-regular non-family workers. Farming was predominantly a family activity in most Member States and Norway, with family labour accounting for over 90 % of agricultural work in Poland, Slovenia, Croatia and Ireland. By contrast, in Slovakia and the Czech Republic only around a quarter of people (measured in AWU) working in agriculture were family members. In all Member States except Croatia, Slovenia and Poland, the work of sole holders exceeded that of family members in family labour. In contrast to family labour, there was a small number of countries where non-family labour accounted for more than 50 % of the labour force. These included the Czech Republic (74.2 %), Slovakia (72.4 %), France (59.0 %) and Estonia (53.6 %). The proportion of non-regular non-family labour force exceeded 10 % in six Member States, with the highest levels reported in Spain (18.7 %), Italy (14.8 %) and the Netherlands (14.1 %).

Processing of farm products is the most frequent 'other gainful activity'

In addition to farm work, farmers may also carry out other gainful activities (OGA).

It is difficult to find an instrument that provides good information on farmers’ incomes. The design of the EU Statistics on Income and Living Conditions (EU-SILC) — a multi-purpose survey focusing mainly on income — does not allow for analysis of farmers’ incomes. Nevertheless the degree of urbanisation provides some information; in the case of farmers it is the rural area, i.e. where they live. According to EU-SILC, in 2015 the median equivalised net income in the EU-28 was EUR 16 127 per person. When looking at the degree of urbanisation, the most disadvantaged in terms of income were rural areas, with a reported median income 12.5 % lower than the EU-28 average. By contrast, median income in cities and towns and suburbs exceeded the EU-28 average (by 4.9 % and 5.4 %, respectively). In 15 out of 17 Member States that had a median income below the EU-28 average, the lowest income levels were reported for those living in rural areas. This group of countries also reported the biggest variations in income levels between rural areas and cities. This was particularly true in Bulgaria and Romania — two countries with the lowest income levels. In the countries with an income level above the EU-28 average, people living in rural areas of Austria and the United Kingdom recorded the highest level of income. In Ireland, France, Luxembourg, Finland and Sweden the highest income was reported for those living in the cities.

Internet is the least accessible in the rural areas

The life of farmers has been described in this article by using different data sources. The main data source is the FSS, but it is not the only one. To compare information on farmers with the rest of the population, other data sources have also been used. These include the national accounts, the LFS, the EU-SILC and the EU survey on ICT usage in households and by individuals.

National accounts are a system of accounts and balance sheets that provide a broad and integrated framework to describe the economy. They provide information broken down by industry using the NACE classification. Employment in the national accounts combines data from many sources, such as labour force surveys, population censuses, employment registers, income tax registers, business production surveys, labour cost surveys, etc. Employment in national accounts covers everyone engaged in some form of productive activity. It is mainly measured in persons and in hours worked, differentiates between employees and self-employed and is broken down by economic activity. Employment data is broken down by branches and can be presented with different levels of detail. In the first level agriculture is included in branch A together with forestry and fishing. The three activities are separated when the classification is further broken down into 64 branches: A1 – Agriculture (Crop and animal production, hunting and related service activities); A2 — Forestry and logging; and A3 — Fishing and aquaculture. In the article, data is presented for the branch A1 - Agriculture.

The Labour Force Survey (LFS) is a large-sample survey among private households which collects detailed data on characteristics of employment and unemployment. For the LFS, employed persons are those aged 15 and over who during the reference week performed work, even for just one hour, for pay, profit or family gain. This includes people who were not at work but had a job or business from which they were temporarily absent. The LFS sample covers all domains of economic activity and uses the NACE classification.

The Farm Structure Survey (FSS) provides a wide range of information on agricultural holdings, including detailed data on farm labour force characteristics. The FSS is carried out in the form of an agricultural census every 10 years and as a sample survey every 3 years.

The EU statistics on income and living conditions (EU-SILC) is a large-sample survey of private households. It is a multi-purpose instrument which focuses mainly on income. Detailed data is collected on income components, mostly personal income, although a few household income components are included. However, information on social exclusion, housing conditions, labour, education and health information is also obtained.

The survey on ICT usage in households and by individuals is an annual data collection exercise that initially concentrated on access and connectivity issues. Its scope has since been extended to cover a variety of subjects related to communication technologies. The survey covers households with at least one member in the 16-74 age group.

Rural development policy aims to improve: competitiveness in agriculture and forestry; the quality of the environment and countryside; life in rural areas; and the diversification of rural economies. As agriculture has modernised and the importance of industry and more recently services within the economy has increased, so agriculture has become much less important as a source of jobs. Consequently, increasing emphasis is placed on the role farmers can play in rural development, including forestry, biodiversity, the diversification of the rural economy to create alternative jobs and environmental protection in rural areas.

The common agricultural policy (CAP) has been frequently reformed in an attempt to modernise the sector and make it more market-oriented. After almost two years of negotiations between the European Commission, the European Parliament and the Council, a political agreement on the reform of the CAP was reached on 26 June 2013. The agreement was designed to lead to far-reaching changes: making direct payments fairer and greener, strengthening the position of farmers within the food production chain, and making the CAP more efficient and more transparent, while providing a response to the challenges of food safety, climate change, growth and jobs in rural areas, thereby helping the EU to achieve its Europe 2020 objectives of promoting smart, sustainable and inclusive growth. In December 2013, the latest reform of the CAP was formally adopted by the European Parliament and the Council.

All articles on agriculture

ICT usage in households and by individuals (t_isoc_i)

National accounts aggregates by industry (up to NACE A*64 (nama_10_a64)

ICT usage in households and by individuals (isoc_i)

Connection to the internet and computer use (isoc_ici)

Farmers in the EU