Archive:Farm structure in the Netherlands - 2007 results

Figure 1: Distribution of the utilised agricultural area in the Netherlands, 2005 and 2007

Figure 2: Description of the labour force in the Netherlands, 2007

Figure 3: Distribution of the number of livestock units, Netherlands, 2005 and 2007 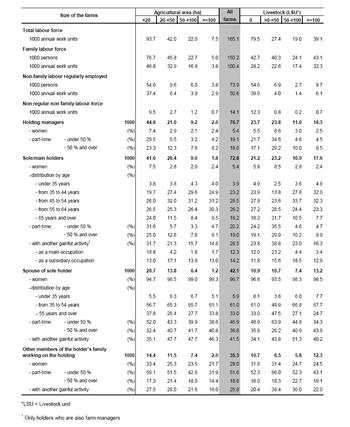 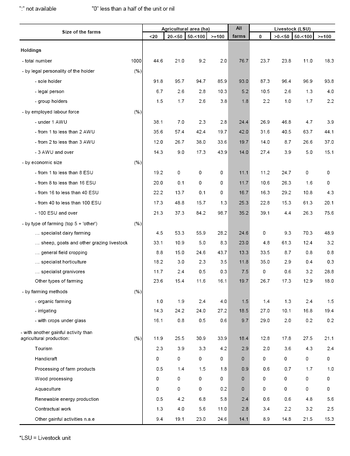 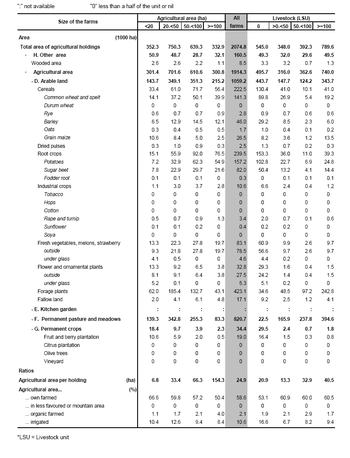 Table 3: Land use by size of the farms, Netherlands, 2007 Eurostat (ef_ov_lusum) 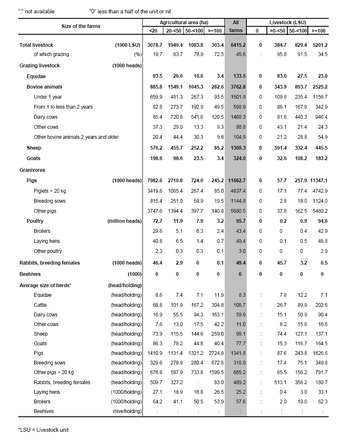 Table 4: Livestock by size of the farm, Netherlands, 2007 Eurostat (ef_ov_lssum) 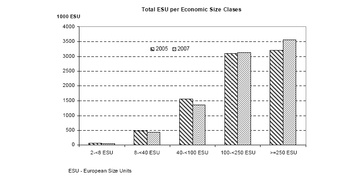 This article is part of a series of country-specific essays on the results of the European Union (EU) Farm structure survey (FSS) 2007. It provides a brief but nevertheless comprehensive insight into farm structure in the Netherlands.

These farms made use of 1.91 million hectares (ha) of utilised agricultural area, (2 % less than in 2005), which makes the average size of a holding in the Netherlands 25 ha (compared with 24 ha in 2005). See Figure 1 for the distribution of UAA in terms of farm size, while Table 2 describes the size distribution and other characteristics of the agricultural holdings.

The farms contained 6.4 million livestock units (LSU) in 2007, 0.4 % more than in 2005. The average number of livestock units per holding rose from 78 to 84 in the Netherlands.The distribution of livestock by farm size is shown in Table 4 and Figure 3.

In the Netherlands in 2007, 59 % of the agricultural area was farmed by its owners.

The total ESU per economic size classes in the Netherlands is outlined in Figure 4.

Due to the different coverage of the FSS across Member States, the total number of farms is not comparable between countries. This is why the present analysis, including Tables 1-4 and the graphs focus on holdings of at least one European size unit.

The survey on the structure of agricultural holdings in the Netherlands was carried out by Statistics Netherlands (CBS) in spring 2007 using an exhaustive survey. Since 1934 full-scale agricultural censuses have been conducted on an annual basis. The reference date of the FSS 2007 was 1 April 2007 for livestock and 15 May for crops. For labour force the reference period was the proceeding year, ending on 1 April 2007.

The target population was all the farms registered in the National Farm Register, which is updated continuously and in 2007 counted 91°000 holdings. The register is kept by the Ministry of Agriculture, Nature and Food Quality and is obligatory for all holdings engaged in agricultural activities. For the census all holdings above 3 NGE (Nederlandse Grootte Eenheid) are selected (about 77 000 farms in 2007 that represent 99% of the standard gross margin). The NGE is the Dutch equivalent of the European size unit, but due to the differences in inflation levels 1 NGE is 1420 euros in the year concerned.

Non-response in the Dutch 2007 FSS was 4% of the farms. Estimation using the next-neighbour imputation was done for the non-response.

Between FSS 2005 and 2007 "maintaining land in good agricultural and environmental conditions" (GAEC) became an agricultural activity and the concerned land has been included in the agricultural area. In the Netherlands it covers close to 2 500 ha.

For each activity (`enterprise`) on a farm (for instance wheat, dairy cow or vineyard), a standard gross margin (SGM) is estimated, based on the area (or the number of heads) and a regional coefficient. The sum of such margins in a farm is its economic size, expressed in European size units (ESU, 1 ESU is a 1200-euro SGM).

An annual work unit (AWU) is equivalent to a worker employed on a full-time basis for one year. In the Netherlands it is 1800 hours (225 working days of 8 working hours per day).