Figure 1: Distribution of the utilised agricultural area, France, 2005 and 2007

Figure 2: Description of the labour force in France, 2007 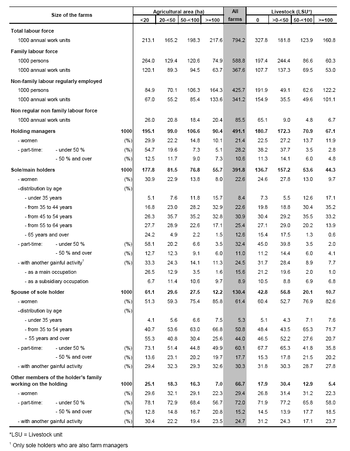 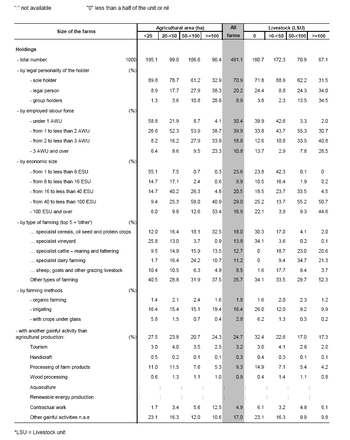 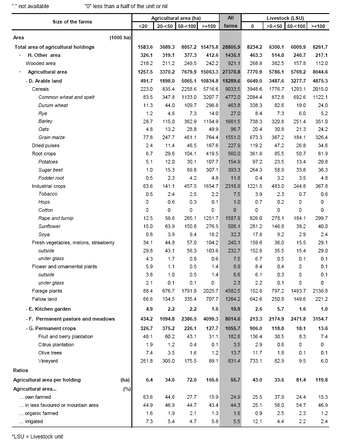 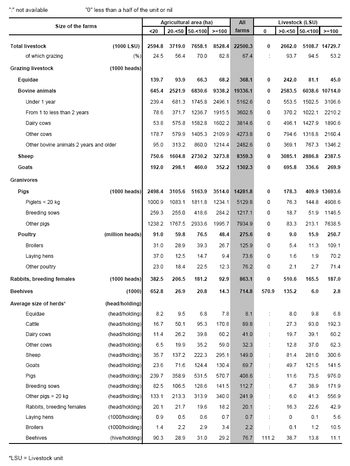 This article is part of a series of country-specific essays on the results of the European Union (EU) Farm structure survey (FSS) 2007. It provides a brief but nevertheless comprehensive insight into farm structure in France.

8 % fewer holdings with vineyards in France in two years

These farms made use of 27.4 million hectares (ha) of utilised agricultural area (UAA), this area represented 95 % of the UAA of French holdings and makes the average size of a holding in France 56 ha. See Figure 1 for the distribution of UAA in terms of farm size, while Table 2 describes the size distribution and other characteristics of the agricultural holdings.

These holdings employed 794 000 annual work units (AWUs), the equivalent of 794 000 people working full time, a decrease of 6 % since 2005. The average area per AWU was 38.6. The organisation and distribution of the labour force in France is described in Figure 2 and Table 1.

There was a noticeable decrease in the pulses area, as almost half (47 %) disappeared between 2005 and 2007. In the same time the area sown with rape and turnip rose by almost one third (32 %) to raise biofuels production.

The situation for subsistence farming in France is outlined in Table 5.

Due to the different coverage of the FSS across Member States, the total number of farms is not comparable between countries. This is why the present analysis, including Tables 1-4 and the figures focus on holdings of at least one European size unit.

The "Service de la Statistique et de la Prospective" (SSP) is the central statistical department of the Ministry of agriculture (MAAP). In collaboration with its regional statistical services it implemented the survey on the structure of agricultural holdings in France. The previous full-scale agricultural census was conducted in 2000. Since 2003 the delivered results also include the overseas departments. The reference period of the survey was the crop year ending on 31 October 2007. However, in the case of the livestock, the reference date is the day of the interview.

The target population consisted of all the holdings producing agricultural goods, reaching a certain threshold (in terms of land area, number of livestock or volume of production) and independently managed. The sampling frame was the Agricultural Census in 2000. The permanent panel (used also in the 2003 and 2005 FSS) was drawn using random sampling with the Neyman-allocation method based on the type of farm and economic size. For each department (NUTS 3) an exhaustiveness threshold (generally 250 ESU) was defined to ensure all larger units were included; these holdings were inserted into a separate stratum. The sample size covered 13.3 % of the French farms, i.e. near 77 774 units (of which 3 554 were in the overseas departments).

The questionnaires were filled in during personal interviews carried out from October 2007 until February 2008.

Between FSS 2005 and 2007 "maintaining land in good agricultural and environmental conditions" (GAEC) became an agricultural activity and the concerned land has been included in the agricultural area. In France it covers close to 90 000 ha, 97 % in holdings with at least 1 ESU.

For each activity (`enterprise`) on a farm (for instance wheat, dairy cow or vineyard), a standard gross margin (SGM) is estimated, based on the area (or the number of heads) and a regional coefficient. The sum of such margins in a farm is its economic size, expressed in European size units (ESU, 1 ESU is a 1200-euro SGM).

An annual work unit (AWU) is equivalent to a worker employed on a full time basis for one year. In France it is 1603 hours (229 working days of 7 working hours per day).