Archive:Evolution of government expenditure by function

General government expenditure by economic function - EU-27 expenditure on social protection stood at 19.9 % of GDP in 2012 and health expenditure at 7.3 %

This publication analyses global trends in the structure of general government expenditure breakdown by their main socio-economic function (according to the Classification of the Functions of Government - COFOG), with a focus on social protection expenditure.

Eurostat collects data on general government expenditure by economic function according to the international Classification of the Functions of Government (COFOG) in the framework of the European System of National Accounts (ESA95). 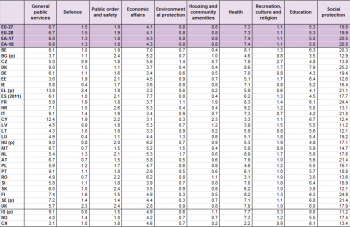 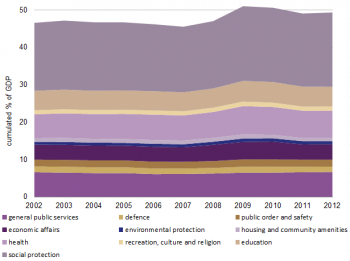 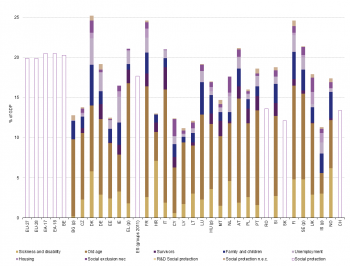 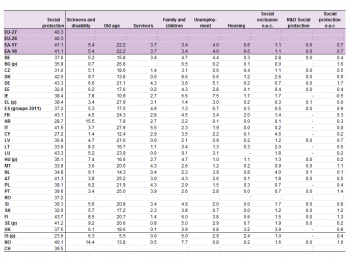 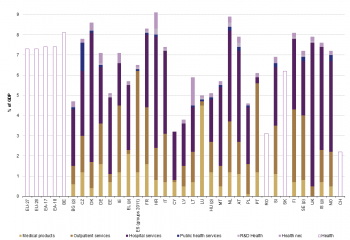 In the EU as a whole, as well as in all EU and EFTA countries reporting data, ‘social protection’ was the most important function of government expenditure. In 2012, government social protection expenditure in the EU-27 was equivalent to 19.9 % of GDP (see Table 1), 0.3 % percentage points more than in 2011.

For instance, in Greece (13.8 % of GDP) and Cyprus (12.4 % of GDP), expenditure related to 'general public services' was significantly higher than in the other reporting countries. For Greece, this is partially due to interest payments to service government gross debt. Switzerland (3.1 % of GDP), Estonia (3.6 % of GDP) and Bulgaria (3.7 % of GDP) were the countries reporting the lowest levels of expenditure on 'general public services' for 2012. For Bulgaria, this was partially due to the low level of general government gross debt. After Estonia (9.8 % of GDP), Bulgaria (18.5 % of GDP) reported the lowest level of gross debt at the end of 2012.

The highest levels of total expenditure on defence were found in Greece and in the United Kingdom (2.4 % of GDP and 2.3 % of GDP respectively versus 1.5 % of GDP for the EU-27). In contrast, Iceland recorded only 0.02 % of GDP on defence in 2012. While Iceland is a member of NATO, it does not have standing defence forces and most functions undertaken by defence forces in other countries are assigned to the coast guard and police force (and would then be recorded under 'public order and safety'). In 2012, Ireland and Luxembourg (both at 0.4 % of GDP), Malta, Austria and Romania (all at 0.7 % of GDP) also had comparatively low expenditure on defence.

As regards government expenditure on economic affairs at the level of the reporting countries, there is considerable variation over time as the amounts recorded may be influenced by operations of an extraordinary nature, such as reclassification of public companies into the general government sector from a certain point onwards, sale of UMTS (mobile phone) licences recorded as negative expenditure, capital injections recorded as capital transfers, notably benefiting financial institutions and other categories of capital expenditures such as guarantee calls.

Capital injections into banks recorded as capital transfers explain the relatively high figures for Belgium and Spain in 2012. The importance of the 'economic affairs' division may furthermore be influenced by the amount of subsidies given to public or private transportation companies and even more by the amount of expenditure on transport companies classified within the general government sector.

The Netherlands, Malta, the Czech Republic and Luxembourg devoted between 1.3 % of GDP and 1.7 % of GDP to 'environmental protection', while Cyprus, Finland and Sweden reported 0.3 % of GDP in 2012.

In 2012, the Czech Republic, together with Iceland, registered the largest ratio to GDP of government expenditure in the 'recreation, culture and religion' function (2.7 % of GDP). For the Czech Republic, this is largely explained by a restitution of assets to the Church in the fourth quarter of 2012.

Further analysis for some economic functions is described in more detail in the specific 'Statistics in Focus' publications devoted to the different COFOG divisions.

The overall evolution of general government expenditure in recent years was to a large part driven by the evolution of social protection expenditure, the one-off events recorded in 'economic affairs' as well as 'general public services' including notably interest payments to service government debt (COFOG group 01.7 'public debt transactions'). Also, at EU-27 level, public expenditure on health significantly increased from 2009 onwards, when it exceeded 7 % of GDP, reflecting the evolution of GDP in the light of largely stable responsibilities of government.

Social protection: the most important function of government expenditure

With the exception of Iceland, the Nordic countries all exhibit a relatively high level of expenditure on social protection, while those Member States which joined the EU after 2004 tend to have the lowest shares.

In the countries for which detailed data is available, the breakdown of social protection expenditure by detailed COFOG group reveals different national structures.

Other relatively important groups are 'family and children', benefiting families with dependent children (20.3 % and 21.0 % respectively of total expenditure on social protection in Denmark and Luxembourg, or 5.1 % and 4.0 % respectively of GDP), and 'unemployment' (nearly 20 % of social protection expenditure in Ireland and Spain; in Spain this reflected the second highest level of unemployment in the EU - 25.8 % in December 2013).

As regards the distribution of expenditure by transaction in 2012 (see Methodological Notes), 88.7 % of EU-27 public expenditure in the ‘social protection’ division concerns social benefits (social cash benefits and social transfers in kind supplied to households via market producers) to households, while compensation of employees and intermediate consumption account for 4.9 % and 3.6 % respectively.

This is a relatively common pattern across countries, although it can be noticed that the share of social benefits in social protection expenditure is lower than 80 % only in the Nordic countries, where this was accompanied by a higher share of compensation of employees.

Health had the second highest share of EU-27 general government expenditure in 2012.

In the EU-27, general government expenditure on health amounted to around EUR 948 billion in 2012, or 7.3 % of GDP. In most reporting countries, 'health' was the second largest function in public expenditure after social protection.

Annual government finance statistics (GFS) data are collected by Eurostat on the basis of the European System of Accounts (ESA95) transmission programme. Member States are requested to transmit, among other tables, table 1100, 'Expenditure of general government by function' twelve months after the end of the reference period. Table 1100 provides information about expenditure of the general government sector divided into main COFOG functions and ESA95 categories. The transmission of the COFOG I level breakdown (divisions) is compulsory for the years 1995 onwards, whereas information on the COFOG II level (COFOG groups) is provided on a voluntary basis. The main reference years used in this publication are 2012 as the latest year available and 2002 as the first year for which complete data on expenditure by function are available at EU-27 level.

The data relate to the general government sector of the economy, as defined in ESA95, paragraph 2.68: 'All institutional units which are other non-market producers [institutional units whose sales do not cover more than the 50 % of the production costs, see ESA95 paragraph 3.26] whose output is intended for individual and collective consumption, and mainly financed by compulsory payments made by units belonging to other sectors, and/or all institutional units principally engaged in the redistribution of national income and wealth’.

The Classification of the Functions of Government (COFOG) classifies government expenditure into ten main categories (divisions known as the 'COFOG I level' breakdown): general public services; defence; public order and safety; economic affairs; environmental protection; housing and community affairs; health; recreation, culture and religion; education; social protection. These divisions are further broken down into 'groups' (COFOG II level). Further information is available in the Eurostat Manual on sources and methods for the compilation of COFOG Statistics

In the ESA95 system, recording is in principle on an accrual basis, that is, when ‘economic value is created, transformed or extinguished, or when claims and obligations arise, are transformed or are cancelled.'

For more country-specific notes, e.g. on missing data, please refer to the metadata published on Eurobase. The authors can be contacted at ESTAT-ESA95-GOV@ec.europa.eu

In the framework of the European System of National Accounts (ESA95), Eurostat collects data on general government expenditure by economic function according to the international Classification of the Functions of Government (COFOG) – see methodological note.