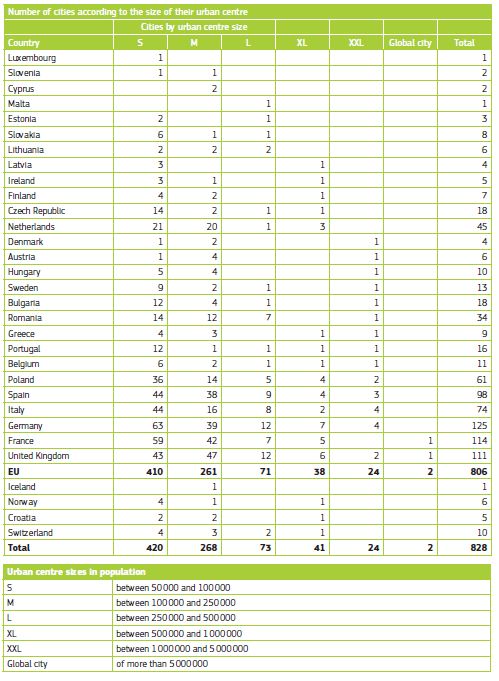 Table 1: Number of cities per country and per urban centre size, 2006
Source: Eurostat 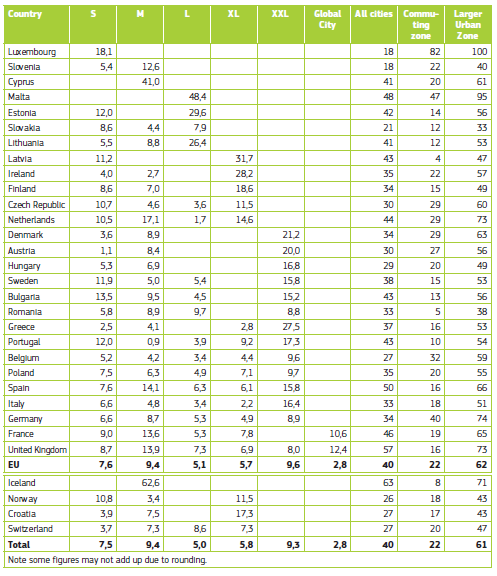 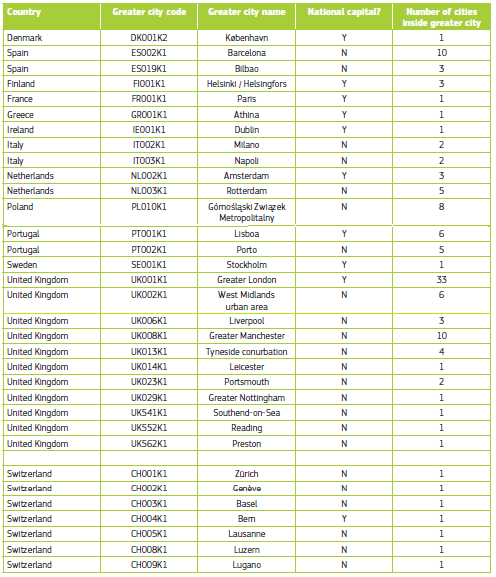 This new OECD-EC definition identified 828 (greater) cities with an urban centre of at least 50 000 inhabitants in the EU, Switzerland, Croatia, Iceland and Norway. In addition, this methodology identified a further 492 cities in Canada, Mexico, Japan, Korea and the United States. This Regional Focus describes on the European cities, for information on the other cities see Redefining urban: a new way to measure metropolitan areas (OECD 2012). Half of these European cities are relatively small with a centre between 50 000 and 100 000 inhabitants. Only two are global cities (London and Paris). These cities host about 40 % of the EU population. These cities do not include towns and suburbs which cover another 30 % of the EU population according to the revised degree of urbanisation classification.

The Larger Urban Zone consists of the city and its commuting zone.

This definition allows for the first a comparison of the number of cities and the share of population in them on a harmonised basis across Europe.

Further down the city list, there are still some surprises with some nationally defined cities missing and some other municipalities included. In part, this is because only the top half of the urban hierarchy has been identified here. Small and medium-sized towns with a centre with between 5 000 and 50 000 inhabitants are not yet defined in a harmonised manner. A new ESPON project ‘TOWN’ will search for a harmonised definition of the bottom half of the urban hierarchy. Mostly, the surprises are due to the difference in the population of an urban centre and the administrative city.

For data availability reasons, the commuting zones had to be constructed from LAU1s in the UK and the Czech Republic, and from NUTS3s in Germany and Denmark. Depending on the city, this means that match with the commuting zone varies from good to moderate. For more information on each Larger Urban Zone, see here.