Eurostat's Urban audit data collection provides information on the different aspects of the quality of urban life in Europe’s cities. The audit is the result of a joint effort by the participating cities, the national statistical offices belonging to the European statistical system and the European Commission’s Directorate-General for Regional Policy. The success of this data collection depends on their contributions and continued support. 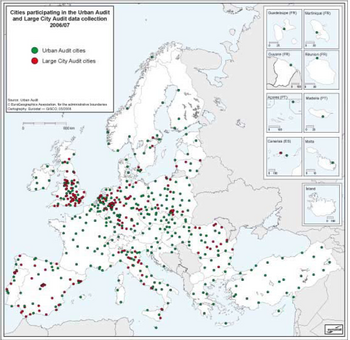 At present, the Urban audit includes 321 cities from the European Union (EU), 26 Turkish cities, six Norwegian cities and four Swiss cities. In the course of 2008, data collection from five Croatian cities was started. 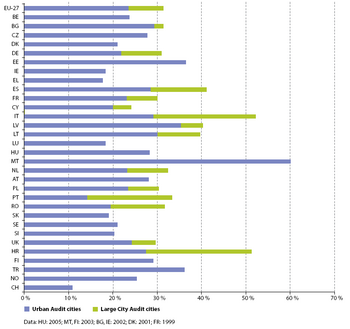 Figure 1: Population living in Urban audit and Large city audit cities as a percentage of the national population, 2004 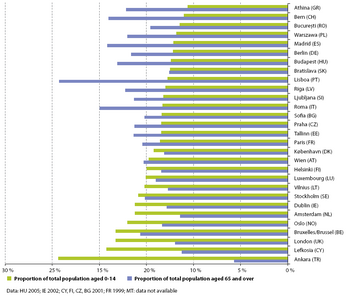 Figure 2: Proportion of population according to age groups in European capitals, 2004 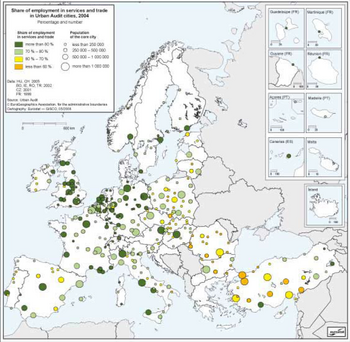 Map 2: Share of employment in services and trade in Urban audit cities, 2004, percentage and number 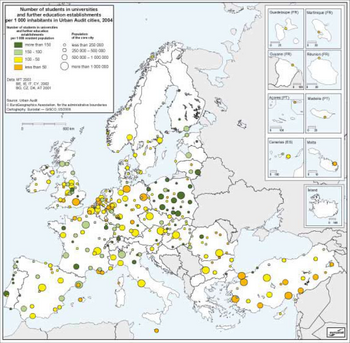 Map 3: Number of students in universities and further education establishments per 1 000 inhabitants in Urban audit cities, 2004 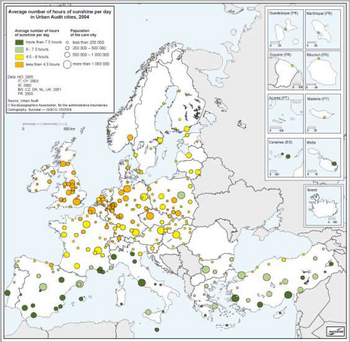 Map 4: Average number of hours of sunshine per day in Urban audit cities, 2004 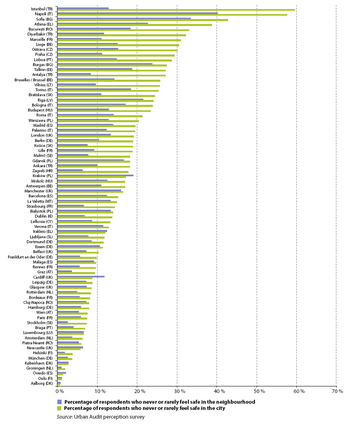 Figure 3: Perception of safety in selected Urban audit cities, 2006 - percentage of respondents who never or rarely feel safe in the city or in the neigbourhood in which they live

The power to attract people has been one of the distinguishing characteristics of major cities. The concentration of people is, therefore, one of the basic indicators of a city's attractiveness.

Figure 1 illustrates the percentage of national population living in the Urban audit and Large city audit cities. Map 1 shows the distribution of these cities across Europe (the EU plus selected Turkish, Norwegian and Swiss cities. During 2008, data collection from Croatian cities was initiated). The total population of the 321 Urban audit cities is more than 120 million, representing approximately 25 % of the EU population, while the Large city audit covers an additional 8 % of the EU population. In the two Mediterranean island states, Cyprus and Malta, the proportions of the national population living in Urban audit or Large city audit cities are the highest among all Member States. It is worth noting that the smaller countries are not the only ones with high population coverage: Spain and the United Kingdom also have a percentage value above 40 %.

The size of the urban population in itself reveals only part of the story. Using the Urban audit database, we can examine the age structure of the cities. The share of children under 14 years old in the total resident population was the highest in Ankara and Lefkosia, as shown in Figure 2.

Such capitals as London, Brussel/Bruxelles, Oslo, Amsterdam, Dublin and Stockholm also attract young people: the proportion of under-14s is above 15 % in these cities, whereas in Athina, Bern and Bucuresti only one in 10 residents is in this age group. The Portuguese capital Lisboa has the highest share of residents over 65 years old, followed by two other southern European capitals, Roma and Madrid. In these cities, the share of elderly residents is significantly higher than the share of younger residents, raising concerns about an ageing population profile. This process is brought about by low birth rates and/or high life expectancies. These two indicators are available from the Urban audit database stored on the Eurostat portal.

The enhancement of urban attractiveness is a continuous policy effort. These efforts should achieve, along with other targets, an adaptable and diverse economic structure at the city level to provide a secure employment base for citizens.

Generally, cities with a concentration of economic activity in the tertiary sector are considered to be more flexible and dynamic. The highest shares of employment in services, at more than 92 %, were registered in Cambridge, Luxembourg and Genève. Despite their relatively small populations, these cities are acknowledged as international centres of research, financial services or administration.

Whether cities are experiencing a ‘brain drain’ or a ‘brain gain’ depends on a number of factors, including their ability to attract students to their colleges and universities. Retaining university and college graduates in the city is the next step in establishing a highly skilled workforce. Map 3 shows the number of students in universities and other further education establishments per 1 000 resident population. The highest number of students in higher education per 1 000 resident population was registered in the Italian university town of Padova. Bologna, after which the process of creating the European higher education area (EHEA) was named, also ranked in the top 10. Cities where more than 150 students per 1 000 inhabitants are enrolled in higher education are widely disperesed across Europe. However, in Poland, a high concentration of such cities can be observed.

These data series can also be consulted on the Urban audit database available online. Environmental factors, such as clean air, clear water and friendly weather, also influence the attractiveness of a city. Map 4 provides an overview of one of the basic indicators related to the environment: the average number of hours of sunshine per day. The patterns on the map clearly reflect the variety of climates we can experience throughout Europe. In general, northern and north-western Europe has less sunshine; the lowest daily averages were observed in the cities of the Ruhr area. Cities in southern Europe have more than 7.5 hours of sunshine daily. The largest disparities within a country are registered in Spain, between Bilbao and Málaga.

Besides the economic dimension, the importance of the social dimension of urban attractiveness has been coming to the fore recently. The image of a ‘divided city’ or an ‘unsafe city’ evidently has detrimental effects on the city’s attractiveness.

The image of a city has its roots in associations, memories and feelings linked to the city. Therefore, in addition to hard facts about social exclusion, disparities or crime, the perception of residents is crucial. To find out how citizens feel and think about their city, we can turn to the results of the Urban audit's perception survey. The last survey took place in 2006 and included 75 major cities in the EU, Croatia and Turkey. Survey data were collected through telephone interviews of samples of 500 people per city.

These almost unanimous answers point to the fact that these cities are perceived as safe by their citizens. However, not all cities could be considered safe based on the responses. At the other end of the scale, we find Istanbul (TR) and Napoli (IT). In these cities, more than half of the respondents never or rarely feel safe in the city. In striking contrast to these negative results, remarkably few respondents, less than 15 %, stated in Istanbul that they never or rarely feel safe in the neighbourhood they live in. Large differences between the perceptions of safety in the city in general and in the specific neighbourhood where the respondents live were found in other cities as well, notably in Diyarbakir (TR), Marseille (FR), Antalya (TR) and Praha (CZ). In these cities, the safety of the neighbourhood was rated more positively than the overall safety of the city. These discrepancies indicate the existence of social divisions within a city and the potential existence of ‘crisis districts’.

Following a pilot study for the Urban audit in 2003-2004 covering 58 cities, the data collection has expanded to cover 258 cities. At present, the Urban audit includes 321 EU cities, 26 Turkish cities, six Norwegian cities and four Swiss cities. Data will be collected from five Croatian cities in the course of 2008.

A city can be designated as an urban settlement (morphological concept) or as a legal entity (administrative concept). The Urban audit uses this latter concept and delineates the so-called ‘core city’ according to political and administrative boundaries. Data used to produce the maps in this chapter refer to this spatial level.

However, economic activity, labour force or air pollution, etc. evidently cross the administrative boundaries of a city. To capture information at this extended spatial level, the ‘larger urban zone’ was defined based on commuter flows. The larger urban zone includes the core city and its ‘commuter belt’. Each core city is divided up into sub-city districts. This third spatial level enables information to be collected on disparities within a city. To allow comparative analysis, national-level data have also been compiled. Graph 1, for instance, compares the national population to the population figures collected at the city level.

The selection of Urban Audit cities was based on several criteria. As a general requirement, the cities selected should reflect the geographical cross-section of each country and should comprise approximately 20 % of the national population.

Consequently, in a few countries, some large cities (over 100 000 inhabitants) were not included in the Urban audit. To supplement the Urban audit data collection in this respect, in 2006, a new data collection, the so-called ‘Large City Audit’ was launched. The Large city audit includes all ‘non-Urban audit cities’ with more than 100 000 inhabitants in the EU. For the over 250 cities in the Large City Audit, a reduced set of 50 variables is collected. The list of participating cities was agreed bilaterally with the Member States. Map 1 illustrates the geographical spread of Urban audit cities and Large city audit cities.

More than a decade-long time series

Within each period, a reference year was set: 1991, 1996, 2001 and 2004. Where possible, cities were asked to provide data for these years. An adjacent year was chosen for variables which were not available for the reference year. For the years 1991 and 1996, data were collected only for a reduced number of 80 variables.

More than 300 indicators were defined and calculated, covering most aspects of quality of life in a city including:

Improving the attractiveness of regions and cities is one of the priorities targeted by the renewed Lisbon Strategy and the EU's strategic guidelines for cohesion policy for 2007–13. Quality of life is crucial in attracting and retaining a skilled labour force, businesses, students, tourists and, most of all, residents in a city. Assessing the current situation is a prerequisite for any improvement, development and future monitoring. The Urban Audit is a response to this demand for assessment. This data collection provides information on the different aspects of the quality of urban life in Europe’s cities.

The Urban audit is the result of a joint effort by the participating cities, the national statistical offices belonging to the European statistical system (ESS) and the European Commission’s Directorate-General for Regional Policy. The success of this data collection depends on their contributions and continued support.

What makes the Urban audit unique?

The Urban audit exercise can now look back over almost a decade of trials, errors, and achievements. Several concepts were tested and large volumes of data were collected during the pilot study in 1999, the first large-scale data collection round of 2003/04 and the most recent collection round of 2006/07. The data which passed the quality control procedures has, since April 2008, been available in Eurostat’s statistical databases. The uniqueness of the Urban audit data set lies in the extent of its three main dimensions: its wide choice of indicators, its large geographical coverage and its decade-long time series.