Environmental taxes account for 6.17 % of all revenues from taxes and social contributions in the EU-27 in 2011

This Statistics Explained article is outdated and has been archived - for recent articles on environment see here. 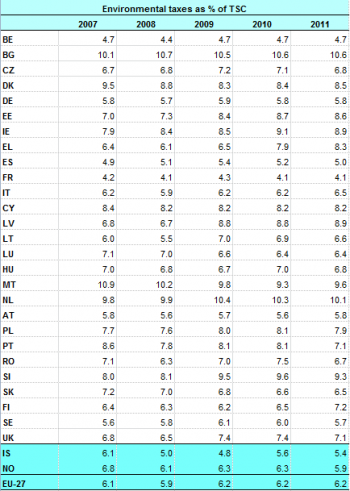 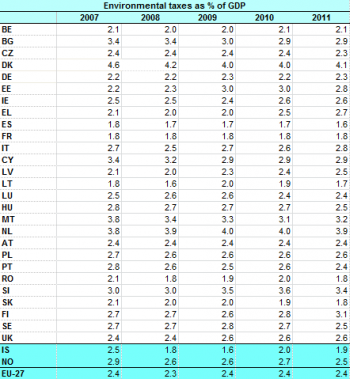 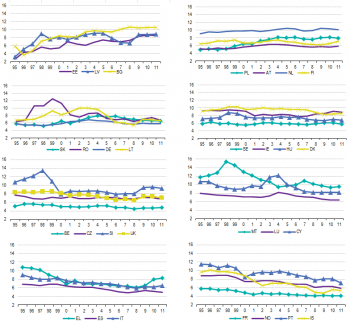 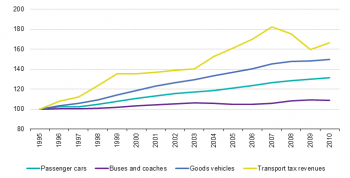 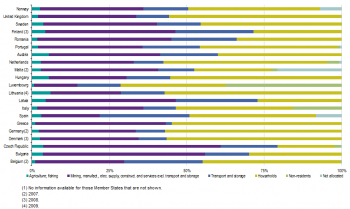 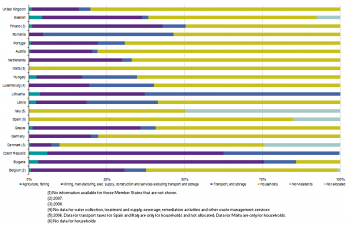 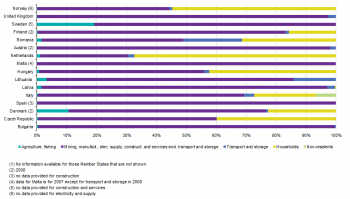 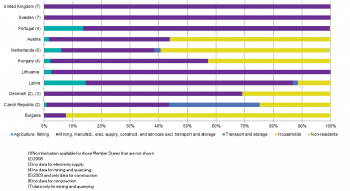 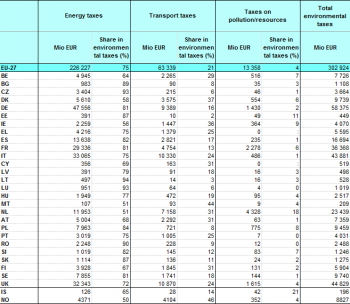 As a percentage of TSC, the trend of environmental taxes has been downward throughout the period 1995 to 2008, with environmental tax revenue dropping by 1 percentage point of TSC to 5.92 % in 2008. A brief rise to 6.23 % occurred in 2009 due to the fall in government revenue which resulted from the financial crisis. In 2010, however, the percentage again decreased to 6.20 % of TSC, reaching 6.17 % in 2011. The many causes for this continued decline in importance of environmental taxes are explained further down in this article.

Environmental taxes account for 6.17 % of all revenues from taxes and social contributions in the EU-27 in 2011 with environmental tax revenues amounting to EUR 303 billion.

An environmental tax is one whose tax base is a physical unit (or a proxy of it) of something that has a proven, specific negative impact on the environment. Environmental taxes can be of four types: energy, transport, pollution and resource taxes. Energy taxes include taxes on energy products (e.g. coal, oil products, natural gas and electricity) used for both stationary purposes and transport purposes.

In 2011 almost 75 % of all environmental taxes were energy taxes. By convention, CO2 taxes are also included in this tax category since they are usually levied on energy products. Including CO2 taxes with pollution taxes rather than energy taxes would distort international comparisons.

Transport taxes mainly include taxes related to the ownership and use of motor vehicles. In 2011, 21 % of EU-27 total environmental tax revenue came from transport taxes.

When comparing the environmental tax revenue to GDP, most of the countries were in a range between 2 % and 3 % of GDP in 2011 (see Figure 2). Denmark and the Netherlands had the highest ratios at 4.1 % and 3.9 % of GDP respectively. Spain, Lithuania, France, Slovakia, Romania and Iceland are the only countries where environmental taxes were less than 2 % of GDP. The EU-27 average was 2.4 % of GDP.

Tables 2 and 3 show the environmental taxes as a % of GDP and TSC in the last 5 years by country as well as for EU-27. Detailed figures by country are also available in Table 4 at the end of the article.

When comparing the distribution of the different tax types across countries (see Figure 3), large differences can be seen.

Many of the eastern European countries and Luxembourg raise 85 % or more of their environmental tax revenue from energy taxes. This is due to the higher energy intensity of eastern European economies compared with the EU-15, which renders their tax bases larger than those in the EU-15. In Luxembourg the high share for energy taxes is due to the high amount of road fuels sold in the country to non-residents, which increases the tax base for energy taxes compared to the other European countries.

At the other end of the scale, in Malta and Denmark transportation taxes were almost as significant as energy taxes. The Netherlands, Iceland, Estonia, Ireland, Poland, Belgium, Slovenia and France were the only countries in which pollution and resource taxes accounted for more than 5 % of total environmental tax revenue. Detailed figures by country are available in Table 4.

Comparing the evolution of environmental tax revenue in European countries

While environmental taxes as a share of GDP have converged to a level between 2 % and 3 % of GDP in most European countries in the period from 1995 to 2011, the share of environmental tax revenue in % of TSC has not followed the same trend (Figure 4).

Many eastern European countries record an increase in environmental tax revenue (in % of TSC) since 1995.

On the other hand, Portugal and Iceland observed large decreases in the environmental tax share of TSC since 1995. In Portugal it went down from 11.5 % to 7.1 % and in Iceland from 9.6 % to 5.4 %. The decrease in Portugal might be explained by the high initial level, combined with a lack of indexation of taxes and low company car taxation. These are discussed in the publication “Tax reforms in EU Member States 2012” (EU, 2012).

In 1998, Malta and Slovenia showed notable peaks in the share of environmental taxes in relation to TSC, as did Romania in 1999. This was due mainly to changes in revenues from direct taxes and social security contributions paid by employers. There was also a major change in the tax system in Slovenia in 1999 when VAT replaced the previous sales tax.

The evolution of environmental tax revenue and the financial crisis

The financial crisis had a large impact on GDP and tax revenues in the EU.

There are several possible reasons for the decoupling of the growth rates of energy tax revenue and GDP in the EU-27.

The switch towards renewable energy may have eroded the tax base since renewable energies (for example biofuels) are often taxed less or completely exonerated from taxation.

It would have been possible to balance the erosion of the tax base by an increase in energy tax rates. However, governments may have been reluctant to increase tax rates or introduce new taxes on energy products because of the already high price for households and businesses.

At the same time governments have started to put in place mechanisms other than taxes which affected energy demand (e.g. energy saving programmes).

Figure 7 gives a closer look at the development from 2007 to 2011. Values for GDP, total tax revenue, energy taxes and transport taxes are all indexed for comparability. Between 2007 and 2009 GDP dropped by 5.3 % and total tax revenues by almost 8 %. Looking closer at the two larger types of environmental taxes, energy and transport, there are some differences in volatility.

Transport taxes are levied mainly on vehicles at the time they are sold (e.g. sales taxes) and then for every year they remain in circulation (e.g. circulation taxes). Thus, the revenue from transport taxes tends to follow the dynamics of the vehicle stock and of vehicle sales. The stock of passenger cars, goods vehicles and buses and coaches has been growing.

However, in 2007-2011 passenger car sales in the EU-27 slowed down due to the economic crisis (see Figure 8). In countries with high car sales taxes, an economic downturn can have a big impact on car sales and therefore on revenues from such taxes.

Furthermore governments may have reduced sales and circulation taxes on vehicles in order to counterbalance the effects of the economic crisis.

These two factors could partly explain the reduction in transport tax revenue after 2007 (see Figure 9).

The contribution of agriculture to total energy tax revenues was less than 6 % in all countries for which data are available.

The share of energy taxes in the total revenue from environmental taxes differs widely across the countries – for details see Table 4.

Data relating to environmental taxes can be used to analyse the revenue stream from such taxes, as well as providing a relative measure of the importance of these taxes through the calculation of ratios relative to GDP or the total revenue from all taxes and social contributions. In the first case, the comparison helps to provide an understanding of the tax burden. In the second case, the comparison helps assess whether or not there is a shift towards environmental taxes, in other words, shifting the tax burden from other taxes (for example, on labour income) towards environmental taxes.

Increasing revenues from environmental taxes should be interpreted with caution. The increases may be caused by the introduction of new taxes or an increase in tax rates, or alternatively may be linked to an increase in the tax base.

Economic instruments for pollution control and natural resource management are an increasingly important part of environmental policy in the EU Member States. The range of instruments that are available includes, among others, environmental taxes, fees and charges, tradable permits, deposit-refund systems and subsidies.

Environmental taxes have been increasingly used to influence the behaviour of economic operators, whether producers or consumers. The EU has increasingly favoured these instruments because they provide a flexible and cost-effective means for reinforcing the polluter-pays principle and for reaching environmental policy objectives. The use of economic tools for the benefit of the environment is promoted in the Proposal for a new EU Environment Action Programme to 2020 - 7th environment action programme (EAP), the renewed EU sustainable development strategy and the Europe 2020 strategy.