This article belongs to a set of statistical articles which analyse the structure, development and characteristics of the various economic activities in the European Union (EU). According to the statistical classification of economic activities in the EU (NACE Rev 1.1), the present article covers the production of domestic appliances, corresponding to NACE Group 29.7, which is part of the machinery and equipment sector. The activities covered in this article include the production of: 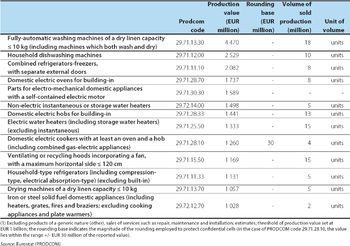 The domestic appliances manufacturing sector (NACE Group 29.7) of the EU-27 consisted of 5.2 thousand enterprises, which employed 287.6 thousand persons, accounting for 7.9 % of the workforce within machinery and equipment manufacturing (NACE Subsection DK). These enterprises recorded EUR 52.7 billion of turnover in 2006, from which EUR 12.7 billion of value added was generated, the latter accounting for 6.6 % of the machinery and equipment manufacturing total. Within this sector the manufacture of electric domestic appliances (NACE Class 29.71) contributed just over 84 % of sectoral value added and employment, the remainder coming from the manufacture of non-electric domestic appliances (NACE Class 29.72).

The value added generated by the domestic appliances manufacturing sector in Germany was much larger than that in any other Member State, accounting for 28.4 % of the EU-27 total in 2006: Italy (20.6 % of the EU-27 total) and the United Kingdom (10.4 %) were the only other Member States with a double-digit share. Italy and Germany had the largest workforces in this sector, both over 55 000 persons employed. In relative terms, Slovenia was by far the most specialised Member State[1] in the manufacture of domestic appliances, as this sector contributed 2.0 % to Slovenian non-financial business economy (NACE Sections C to I and K) value added in 2006, approaching nine times the average contribution (0.2 %) across the EU-27: this high degree of specialisation in Slovenia was due essentially to the electric domestic appliances manufacturing subsector.

Technological advancements in the machinery and equipment that is used in other sectors of the economy (particularly in mining, manufacturing, energy provision and construction) can have a considerable impact upon the speed, quality and quantity of what is produced, thereby impacting on downstream productivity and profitability. The machinery and equipment sector is sensitive, therefore, to overall economic conditions and investment patterns both within the European Union and across the world (the two arguably being more intertwined than ever).

Among the activities covered by the machinery and equipment manufacturing sector, the domestic appliances manufacturing sector (NACE Group 29.7) is the only one for which households are the main customers. Product innovations have tended to concentrate on efficiency and environmental considerations such as energy and water consumption, lifestyle changes, the incorporation of new materials, design and ergonomics.