Trends in crime and criminal justice, 2010

This Statistics Explained article is outdated and has been archived - for recent articles on crime statistics see here. 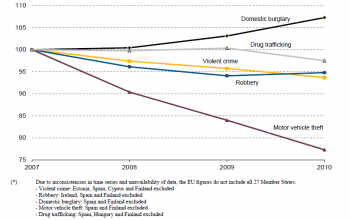 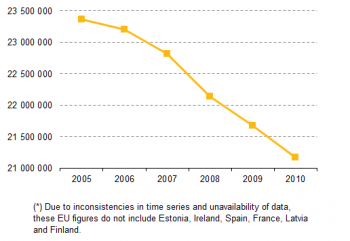 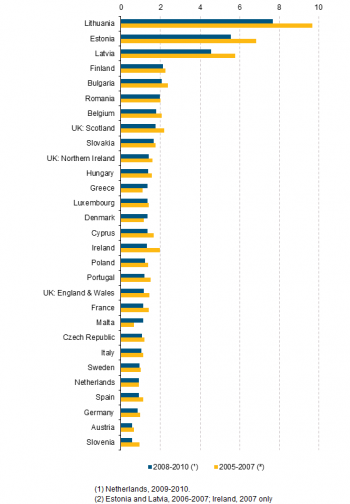 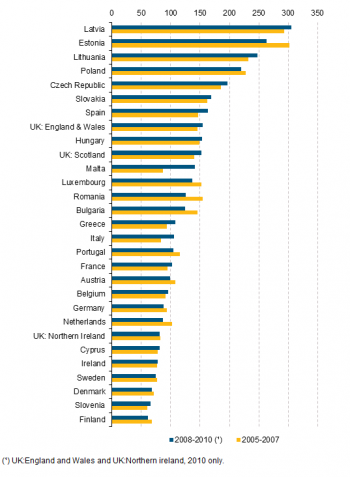 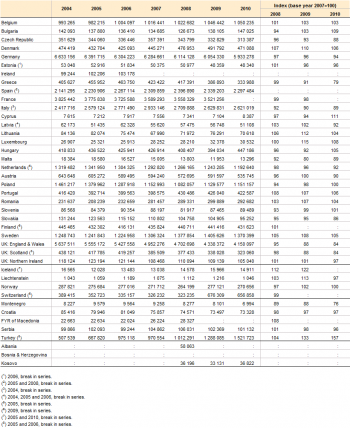 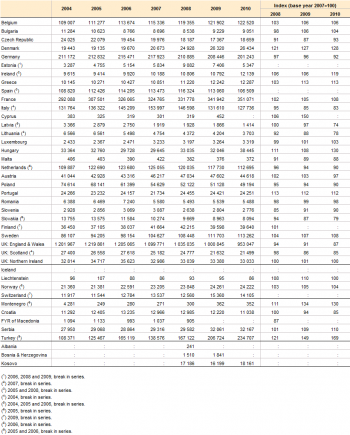 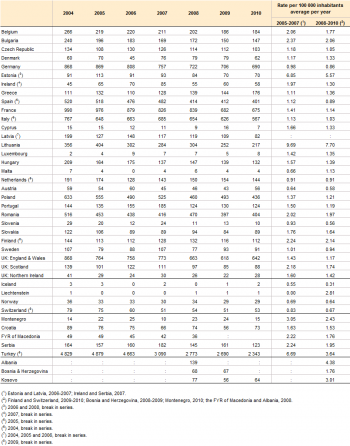 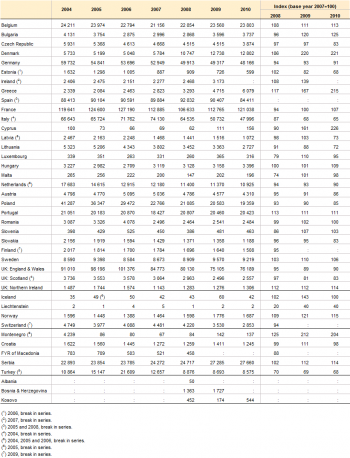 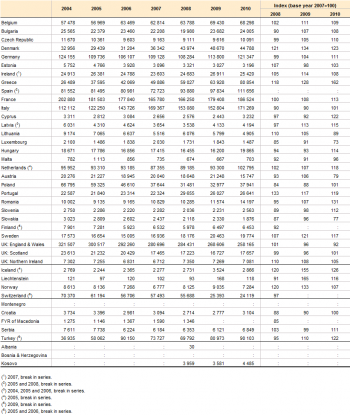 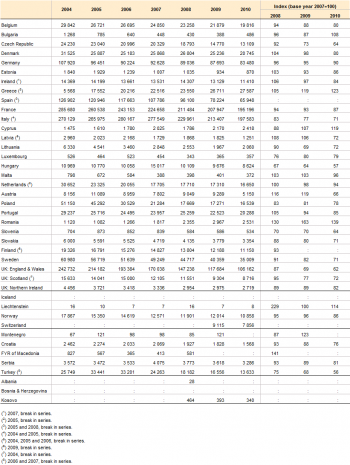 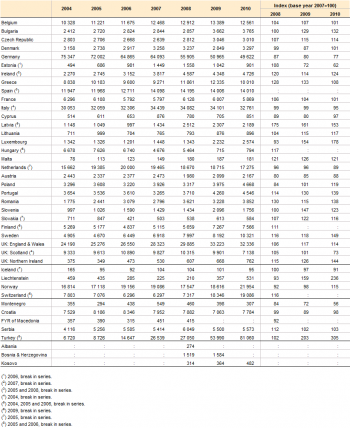 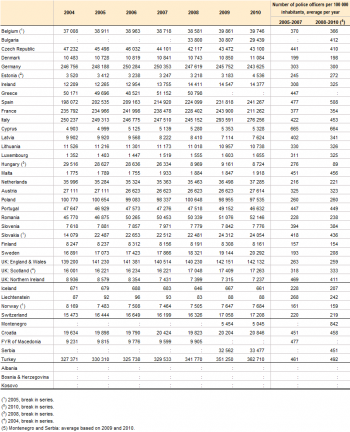 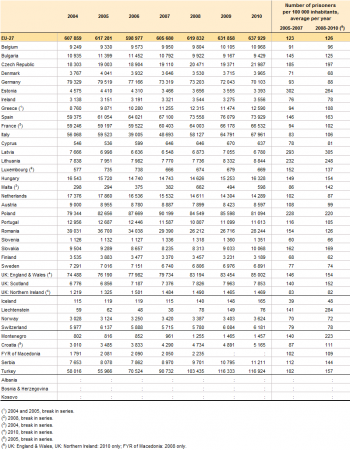 Decreases in recorded crime except for domestic burglary

The latest collection of data indicates a general tendency towards a decrease in the levels of recorded crime across European Union Member States between 2007 and 2010. The number of most types of crimes recorded by the police in the European Union has fallen.

While crimes linked to drug trafficking, robbery and violent crimes decreased between 3 and 6 % between 2007 and 2010, the number of motor vehicle thefts has fallen substantially faster over the same period (-23 %).

The following publication gives an insight into the trends in the various categories of recorded crime and furthermore looks at police officer numbers and imprisonment rates.

Crimes recorded by the police

The crime statistics presented here cover offences recorded by police in the Member States of the EU and some other European countries. These figures do not purport to describe all crime in Europe: some crime goes unreported; and changes in rates of particular offences may result from changes in the focus of police activity.

There is usually no straight match to be made in types and levels of crime between countries, because legal and criminal justice systems differ in such areas as: definitions of crimes[1]; methods of reporting, recording and counting crimes; and rates of reported to unreported crime[2].

Although national figures have been aggregated to provide EU level estimates, this is only for the purpose of identifying overall trends. Any inferences at the EU or Member State level should be based on trends over time.

When looking at the detailed national figures, the situation is nevertheless more balanced: twelve EU Member States saw their number of crimes increase within this five-year period (see Table 1).

The latter has largely influenced the EU downward trend with the largest decrease of crimes in terms of registered cases (-1.5 million) among EU Member States over this period.

Beyond the EU borders, the total number of crimes recorded by the police in Turkey increased by 57 % between 2007 and 2010 (following a break in the series in 2006).

The figures for violent crime comprise those for violence against the person (such as physical assault), robbery (stealing by force or threat of force) and sexual offences (including rape and sexual assault). Close analysis of this class of crime is difficult because not all Member States use the standard definition. However, the general trend at the level of the EU is a decline of about 6 % in the number of these offences recorded between 2007 and 2010.

This overall decline is strongly influenced by the figures from England & Wales, where there was a fall of over 146 thousand violent crimes recorded between 2007 and 2010 (Table 2).

Homicide is defined as the intentional killing of a person, including murder, manslaughter, euthanasia and infanticide. It excludes death by dangerous driving, abortion and assisted suicide.

Furthermore, in some countries, the police register homicide as any death that cannot immediately be attributed to other causes. It may, therefore, be over-represented in the statistics.

The number of homicides recorded in the individual countries is shown in Table 3.

The rate of homicides per 100 thousand inhabitants (Figure 3) reveals a downward trend: comparing the average ratios for 2005-2007 with those of 2008-2010, a decrease can be noted for all countries except Denmark, Greece and Malta. The ratio remained unchanged for the Netherlands.

Despite decreases in the homicide rates for the three Baltic Member States, the number of homicides per 100 thousand inhabitants remained higher in these countries than in all other Member States.

Robbery is a particular type of violent crime, defined as stealing by force or by threat of force. It includes mugging (bag-snatching) and theft with violence.

At the level of the EU, the number of robberies has dropped by 5 % since 2007, mainly due to significant decreases reported by Italy, Poland, England & Wales and especially the Baltic States, where the number of recorded cases has fallen by 29 % (Table 4). In complete contrast are the few countries which recorded large increases: the number of robberies more than doubled in Denmark, Greece and Cyprus between 2007 and 2010.

Property crime covers the stealing or destruction of property. Data for domestic burglary and theft of a motor vehicle are presented below and show different trends (see Tables 5 and 6).

Domestic burglary is defined as gaining access to a dwelling by force in order to steal goods. At the level of the EU this type of crime increased by over 7 % between 2007 and 2010. Among the Member States with a continuous data series over this period, the highest increases in the number of recorded cases occurred in Greece (+62 %) and Romania (+31 %). Conversely, large decreases (between 20 % and 30 %) were reported by Luxembourg, Austria and Slovakia over the three years.

Theft of a motor vehicle covers thefts of cars, motorcycles, buses and lorries, as well as construction and agricultural vehicles.

Motor vehicle thefts have steadily fallen in recent years, partly as a result of technical improvements in vehicle theft deterrents. At the EU level, the number of offences recorded under this category of crime decreased by 23 % between 2007 and 2010, with a sizable fall in England & Wales. Spain has also seen large falls since the introduction of a new data series in 2008.

Only four countries saw the number of motor vehicle thefts increase between 2007 and 2010. In Bulgaria there was an increase of 8 %; increases of around 20 % were reported by Cyprus and Greece, while in Romania, the number of thefts over the same period increased by 39 %.

Drug trafficking is a sub-set of the broader class of drugs offences. It includes the illegal possession, cultivation, production, supplying, transportation, importing, exporting and financing of drug operations.

Beyond the EU borders, the number of crimes linked to drug trafficking in Turkey more than tripled between 2007 and 2010 (following a break in the series in 2007).

The prison population figures comprise adult and juvenile convicted prisoners and pre-trial detainees in all types of prison establishments. Non-criminal prisoners held for administrative reasons (such as investigation of immigration status) are excluded.

Developing EU Statistics on crime and criminal justice: Eurostat received a mandate under the 2004 Hague Programme: strengthening freedom, security and justice in the European Union to develop comparable statistics on crime and criminal justice, and a series of measures towards this end have been defined in the Commission Communication Measuring Crime in the EU: Statistics Action Plan 2011-2015.

Data collection: The methodology used in this publication draws upon that developed by the European Sourcebook of Crime and Criminal Justice Statistics, in particular the definition and measurement of criminal offences, and upon the Surveys on Crime Trends conducted by the United Nations Office on Drugs and Crime.

Countries were asked to adhere to a standard definition when assembling the figures and to provide details of any divergences.

Figures for the United Kingdom are reported separately (as UK: England & Wales, UK: Scotland and UK: Northern Ireland), owing to the existence of three separate jurisdictions.

Comparisons: The data are taken from information recorded or reported by the police. Direct comparisons of crime levels based on the absolute figures can be misleading as they are affected by many factors, including:

Figures for the prison population may also be affected by many factors, including:

For these reasons, direct comparisons of crime levels in different countries cannot be made, except misleadingly. So rates per head of population are not presented in this publication, except for homicide and prison population where the figures may be more readily comparable. In these cases, rates per 100 000 head of population averaged over 3 years have been calculated.

Care should be taken when considering low numbers: homicide rates may vary considerably between years especially in small countries, where there may be jumps from no homicides one year to one or two the next.

In general comparisons are best made on trends rather than levels, on the assumption that the characteristics of the recording system within a country remain fairly constant over time. Even here, however, there are many exceptions as methods change, causing breaks in the series, indicated as footnotes in the individual tables. The colon symbol ‘:’ is used to indicate missing information but also to indicate that definitional changes make comparisons impossible. Fuller information on these changes is given in the metadata files on the Eurostat website. Where national series without definitional changes are available for the years between 2007 and 2010, indices have been calculated using the 2007 figure as a base, in order to make it easier to follow the trends:

Ii = index number for year i

Ci = number of offences recorded by the police for year i

Eurostat website: The website allows users access to the data and the metadata. There are tables on total crime from 1950 onwards and from 1993 for some specific offences, from 1993 for the number of police officers and from 1987 for the prison population. As already noted above, comparability of the figures between countries is difficult to achieve and users are strongly advised to consult the metadata files when referring to the figures. The metadata files contain additional information on the precise definition of the offence used by each country and are available through the following link: Crime and criminal justice (ESMS metadata file — crim_esms)

The progressive elimination of border controls within the EU has considerably facilitated the free movement of European citizens, but may have also made it easier for criminals to operate, especially since the scope of law enforcement authorities and criminal justice systems is generally limited to the boundaries of national borders.

Since the adoption of the Amsterdam Treaty, the EU has set itself the objective of providing a common area of freedom, security and justice. This goal was further developed by the Hague programme in 2004, which outlined ten priority areas: strengthening fundamental rights and citizenship; anti-terrorist measures; defining a balanced approach to migration; developing integrated management of the EU’s external borders; setting-up a common asylum procedure; maximising the positive impact of immigration; striking the right balance between privacy and security while sharing information; developing a strategic concept on tackling organised crime; ensuring a genuine European area of justice; and sharing responsibility and solidarity.

As part of the work to harmonise and develop statistics on crime and criminal justice systems, EU Member States agreed to approximate the definitions of offences and the level of sanctions for certain type of offences. Furthermore, mutual recognition of decisions taken by national judges is set to become the cornerstone of judicial cooperation in criminal matters, with a range of tools having been developed to facilitate practical cooperation across borders.

With respect to police cooperation, the EU seeks to grant law enforcement authorities in each of the Member States access to relevant information (such as DNA, fingerprint, vehicle registration or immigration databases), and to improve police cooperation within a common framework for the protection of personal data. Access to information is covered by a raft of legislation, including the Data Retention Directive 2006/24/EC, the Swedish Initiative Framework Decision 2006/960/JHA, the Prüm Council Decision 2008/615/JHA, and the Regulation 767/2008 concerning a visa information system (VIS) and the exchange of data between Member States.

Police cooperation has been encouraged through legislation such as Framework Decision 2002/465/JHA on Joint Investigation Teams and Council Decision 2008/617/JHA on improved cooperation between special intervention units, while a range of organisations/bodies have been created to aid cooperation between different law enforcement agencies, such as the European Police College (CEPOL), the European Police Office (Europol) or the European agency for the management of operational cooperation at the external borders of the Member States of the EU (Frontex). Furthermore, the EU supports a range of national and multi-national projects, through programmes such as the ‘Prevention of and fight against crime’ (Council Decision 2007/125/JHA).