This article belongs to a set of statistical articles which analyse the structure, development and characteristics of the various economic activities in the European Union (EU). According to the statistical classification of economic activities in the EU (NACE Rev 1.1), the present article covers for the manufacture of computers and office equipment, corresponding to NACE Division 30, which is part of the electrical machinery and optical equipment sector. The activities covered in this article are the manufacture of:

Note that the manufacture of electronic games is classified under toys and is covered within the article on jewelry, musical instruments, sports goods and toy production. 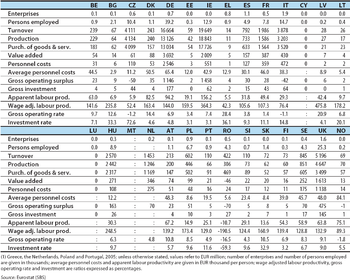 Within the activity of computer and office equipment manufacturing, the biggest subsector was clearly the manufacture of computers and other information processing equipment (NACE Class 30.02), which accounted for more than three quarters of both the EU-27’s value added (77.3 %) and number of persons employed (77.5 %), the remainder being accounted for by the manufacture of office machinery (NACE Class 30.01).

The production of computers and office equipment was highly concentrated in three of the Member States, which together accounted for just over 75 % of the EU-27’s value added in 2006. Germany was the leading producer, with a 38.3 % share of EU-27 value added (considerably higher than its corresponding share of the workforce, which stood at 25.4 %). The second highest level of output was recorded in Ireland (20.9 % of EU-27 value added), while one sixth (16.7 %) of the total was generated in the United Kingdom. To give some idea of the extent to which these three countries dominated EU-27 production, the fourth highest share in EU-27 value added was recorded in Italy at just 4.5 %. The contribution of the computer and office equipment sector to non-financial business economy value added was highest in Ireland (2.2 %), which may be attributed to Ireland often being used as a hub by large international manufacturers before distributing their computers across Europe. The next most specialised country was Hungary (where the manufacture of computers and office equipment accounted for 0.6 % of non-financial business economy value added), while Germany (0.3 %) was the third most specialised Member State.

As with many technology-related activities, EU-27 output from computer and office equipment manufacturing followed an erratic development, rising at a rapid pace through to the peak of the dot.com boom in 2000, before falling in the period from 2001 to 2003. Annual short-term statistics show that the index of production for the computer and office equipment manufacturing thereafter rose at a particularly fast pace (on average by 9.2 % per year) between 2003 and 2007. Having also peaked in 2000 the EU-27 index of employment for computer and office equipment manufacturing started to follow a downward path and fell in successive years through to 2007, losing an average of 4.5 % of the workforce each year; this trend was likely to be endemic of a gradual shift in assembly operations to lower labour cost regions.

Price comparisons over time are particularly difficult because computer specifications are constantly increasing, while the price of computers tends to fall. Indeed, in contrast to the majority of industrial NACE divisions, the domestic output price index for the manufacture of computers and office equipment in the EU-27 fell between 1997 and 2007 at an average rate of 8.1 % per year.

In the majority of the Member States[2], average personnel costs were considerably higher within the computer and office equipment manufacturing sector than across the whole of the non-financial business economy. This was particularly true in Germany, where they were 83.4 % above the average in 2006. These relatively high personnel costs per employee were to some extent reflection of a high level of apparent labour productivity, as each person employed in the German computer and office equipment manufacturing sector generated 75.7 % more added value than the national average within the non-financial business economy. This relative performance was only bettered in Latvia (where apparent labour productivity among the computer and office equipment workforce was 212.1 % higher than the average), Ireland (87.1 %) and in Hungary (82.9 % higher).

The electrical machinery and optical equipment sector is an important and strategic part of Europe’s manufacturing sector, producing a wide range of mostly high-technology products (for example, computers, switchgears or semi-conductors). This sector has been cited as being at the centre of industrial development, as almost every other sector depends, at least to some degree, on the capital equipment, technology, end-products, research and innovations that are provided by the electrical machinery and optical equipment sector. It is therefore often referred to as one of the main drivers of productivity gains and central to the EU’s objective of creating more and better jobs.

The goods and services made within the electrical machinery and optical equipment sector range from capital goods used in energy and primary transformation activities, transport manufacturing (motor vehicles, aeronautics and rail equipment producers) or process manufacturing sectors (agro-industries, chemicals, plastics or wood), through intermediate goods (such as electronic components or wiring) that are often used by other manufacturers, to consumer goods (such as consumer electronics, mobile phones and household appliances).

This sector operates within a long-established legislative framework that covers issues such as product safety, energy labelling, minimum efficiency requirements, eco-design and waste. Two Directives (2008/34 and 2008/35) on waste electrical and electronic equipment (WEEE) and the restriction of the use of certain hazardous substances in electrical and electronic equipment were introduced in 2008. The EU aims to take measures to prevent the generation of electrical and electronic waste and to promote reuse, recycling and other forms of recovery in order to reduce the quantity of such waste by encouraging manufacturers to design products with the environmental impacts in mind throughout their entire life cycle.

The potential role that may be played by the electrical machinery and optical equipment sector with respect to energy efficiency has also been highlighted in recent years. Indeed, considerable effort has gone into reducing the energy consumption of appliances, although changes in lifestyle and working practices have sometimes offset these, for example, while changes to the manufacture of domestic and office appliances has made these more energy efficient, rising equipment rates and the introduction of new technologies may result in higher overall energy consumption. Several directives cover this area of energy saving, in particular a Directive on eco-design requirements for energy-using products, a Directive on the energy labelling of domestic appliances and a Regulation on the energy efficiency labelling programme for office equipment.

The i2010 strategy is the EU’s policy framework for the information society and media. It promotes the positive contribution that information and communication technologies (ICT) can make to the economy, society and personal quality of life. Fundamental to these objectives is the use of personal computers in the workplace, at home, or in the form of mobile devices (laptops and netbooks). From a manufacturing perspective, one of the most important priorities of i2010 is a focus on the EU’s research and development instruments to promote innovation and technological leadership. Actions implemented under this priority aim to strengthen European innovation and research in ICT through initiatives such as the seventh research framework programme (FP7) , European technology platforms, or joint technology initiatives (JTIs) .

As noted in the overview article Electrical machinery and optical equipment production statistics - NACE Rev. 1.1, there have in recent years been increasing calls to use the potential of ICTs to improve energy efficiency as part of an effort to combat climate change and drive economic recovery. ICTs can be used to improve monitoring and management of energy use in factories, offices and public spaces, as well as helping to make people more aware of how they use energy at home (through metering systems that identify where energy is being used). The energy efficiency of information technology (IT) products – computers and peripherals – is covered by the EU’s energy star label which is a voluntary standard that differentiates between efficient and less efficient IT products.