This article belongs to a set of statistical articles which analyse the structure, development and characteristics of the various economic activities in the European Union (EU). The present article covers clothing manufacturing, corresponding to NACE Rev 1.1 Division 18, which is part of the textiles, clothing, leather and shoe production sector. Clothing manufacturing comprises the production of: 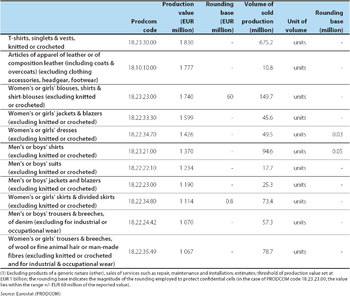 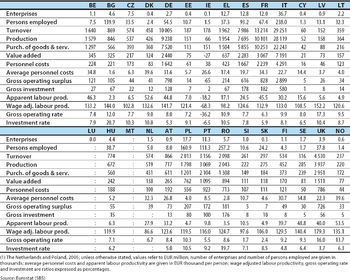 There were about 1.4 million people employed across the EU-27 by the 143.9 thousand enterprises that had clothing manufacturing (NACE Division 18) as their main activity in 2006. These enterprises generated EUR 22.5 billion of value added in 2006, accounting for about one third (34.7 %) of the value added generated by textiles, clothing and leather manufacturing (NACE Subsections DB and DC).

Among the Member States, Romania and Italy had by far the largest clothing manufacturing workforces, each employing about a quarter of a million workers (the equivalent of a combined 35.6 % of the EU-27 total), followed by Bulgaria with a 10.1 % share. In terms of the value added generated by the clothing sector, however, Italy was by far the largest Member State, the EUR 7.2 billion of value added in 2006 accounting for almost one third (32.0 %) of the total across the EU-27. By comparison, the value added generated in Romania accounted for only 4.0 % of the total. These differences in large part reflect the opposing ends of the clothing manufacturing spectrum; clothes manufacturing in Italy is more focused on higher value products (including many designer and luxury brands), whereas in Romania production is concentrated more on the labour-intensive stages of clothing production and mass-market products. Nevertheless, the value added generated by the clothing manufacturing sector in Romania contributed 3.1 % of its non-financial business economy total in 2005, more than in any other Member State and about seven and a half times the EU-27 average. In these relative terms, only Bulgaria (2.9 %, 2005) was almost as specialised as Romania in the manufacture of clothing, with Lithuania (1.6 %) and Portugal (1.5 %) some way behind.

There was a strong downward trend in the production index of clothing manufacturing across the EU-27 during the period between 1997 and 2007, despite an abrupt levelling-off in 2006 and 2007. In the ten years through to 2007, the average rate of decline in clothing output across the EU-27 was 5.3 % per year. However, this overall picture disguises contrasting developments in some of the Member States. There were particularly rapid and sustained declines in clothing manufacturing output in Belgium (an average 14.0 % per year), France (16.1 % per year) and Ireland (17.4 % per year) between 1997 and 2007. For a time, production appeared to shift from west to east with strong growth in the Baltic Member States through to 2001 and in Romania through to about 2002 to 2003. However, after this time there were also steep declines in eastern European countries. Bulgaria stood alone among the Member States as having sustained and sometimes rapid growth in clothing manufacturing output; in the period between 2000 and 2007, the Bulgarian production index for clothing manufacturing more than doubled.

Among the NACE classes within other wearing apparel and accessories manufacturing activities (NACE Group 18.2), the fastest rate of decline in output across the EU-27 during the ten years through until 2007 was for underwear (8.6 % per year). However, the decline in the output of the relatively small activity of the dressing and dyeing of fur and the manufacture of articles of fur (NACE Group 18.3) was even stronger (an average rate of 12.5% per year).

Nevertheless, the value added generated in the clothing sector more than covered personnel costs in 2006, the resulting wage-adjusted labour productivity ratio of 135.1 % in the EU-27 being very similar to the ratio for textiles, clothing and leather manufacturing as a whole. In Ireland, Greece, the Netherlands (2005), and Slovenia, however, value added per person employed did not cover average personnel costs. In contrast, the wage-adjusted labour productivity ratios of the clothing manufacturing sectors in Italy, Sweden and the United Kingdom were not only higher than the average for textiles, clothing and leather manufacturing as a whole, but were similar to or a little higher than average ratios for the non-financial business economy.

Since the closure of the World Trade Organisation’s (WTO) ten-year, transitional Agreement on Textiles and Clothing (ATC) at the end of 2004, the European Union market for textiles, clothing, leather and footwear has been open to far more global competition, particularly from China and other Far Eastern countries. The European Commission published a study on the competitiveness, economic situation and location of production in the textiles and clothing, footwear, leather (and furniture) industries in 2007, which put forward some ideas for consideration: to upgrade knowledge and skills within the sector; to enhance the value added of EU manufactured products, perhaps through emphasising social ethics, environmental and health considerations and ethical sourcing; to enhance the protection of intellectual property; to foster trade and eliminate trade barriers; to improve the integration of fashion and design in the sector and better support young designers.

The manufacture of clothing involves design (styling, prototyping and choice of collections), development (patterns, sourcing fabric) and production (cutting, sewing, pressing and finishing) processes. Innovation is seen as an important requirement if clothing manufacturing in the EU is going to be more competitive in ever more global markets. The European Commission has already identified technical textiles for intelligent personal protective clothing and equipment (PPE) as a key area of high potential growth under its Lead Market Initiative (COM(2007)860 final). Protective textiles comprise clothing and other textile-based systems whose main function is to protect users from hazards and dangers in the conditions in which they operate, such as civil and military emergency interventions or in hospitals and manufacturing environments that require insulation from bacterial and viral contamination. Various forms of support have been proposed to stimulate research and development in this area, as well as accelerating standardisation, raising the know-how of public purchasers and enhancing the coherence of safety user requirements. A further challenge faced by small producers who want to develop new products and applications is the ease and ability to secure additional capital, whether from public or private bodies.