This Statistics Explained article is outdated and has been archived - for recent articles on non-EU countries see here.

This article focuses on education and training statistics for the European Union (EU) and the Republic of Chile (Chile). It covers a range of subjects including expenditure, personnel, participation rates and attainment and gives an insight into the Chilean economy and society compared with the European economy.

In 2011, 42.1 % of household spending was dedicated to school and higher education in Chile. Almost half of students attended ‘subsidised’ schools, where costs are split between the State and parents. Parents spent on average USD 400 per child per year, when at the same time the monthly minimum wage is USD 363. Only 15 % of spending on higher education comes from public sources, compared with an OECD average of 69 %. The ‘End copayment bill’ proposed by the Ministry of Education seeks to end the copayment/shared funding of schooling in order to increase access to education [1].

Public expenditure on education in general includes spending on schools, universities and other public and private institutions involved in delivering educational services or providing financial support to students. The cost of teaching increases significantly as a child moves through the education system, with expenditure per pupil/student being considerably higher in universities than in primary schools.

Comparisons between countries relating to levels of public expenditure on education are influenced by differences in price levels and by the number of students. Figure 1 provides information on the level of public expenditure as a percentage of GDP, and Chile’s figures ranged from 3.0 % to 4.5 % of GDP. There is a clear upward trend since 2007, with a small drop in 2011, reaching a maximum of 4.5 % in 2012. Data for the EU-28 highlight that spending levels were higher by almost 2 percentage points (pp) than Chile, and ranged from 4.9 % to 5.4 %. 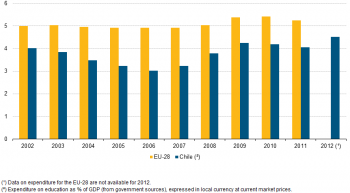 Figure 1: Expenditure on education for all levels of education combined, EU-28 and Chile, 2002–12
(% of GDP)
Source: Eurostat (educ_figdp) and the United Nations Educational, Scientific and Cultural Organisation (UIS: Education)

Average public spending per pupil or student in education is related to GDP per capita as shown in Figure 2. This is similar to the relative size of public education expenditure compared to GDP, but is adjusted for the proportion of pupils and students within the whole population, meaning the share of the population on which that relative expenditure is focused. Comparing the public expenditure part of Figure 1 with that of Figure 2, one can see that the difference between EU and Chile is higher when the data is relativized by student. Public expenditure on education in the EU-28 as a percentage of GDP was highest in 2009, 2010 and 2011, with Chile also recording high rates for the same time period, reaching their maximum level in 2012. 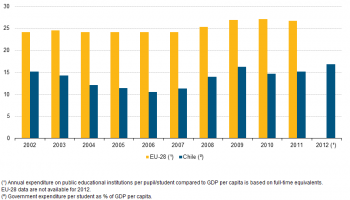 Figure 2: Public expenditure on education for all levels of education combined, per pupil/student, EU-28 and Chile, 2002–12
(% of GDP per capita)
Source: Eurostat (educ_fipubin)

In the EU-28, over one third (34.2 %) of the population aged 25 to 34 held a tertiary education degree compared with 19.7 % for the older generation. In 2012, the gender gap over the generations is overall relatively small. Bigger differences appear only when taking a closer look at the age classes: tertiary attainment was higher for men than for women among the older generation (aged 55–64), both in Chile and the EU-28. In contrast, in the youngest generation (aged 25–34) women with a tertiary education surpassed men by 9 pp in the EU-28 and by 2 pp in Chile.

Analysis of tertiary students by sex shows that the share of female students enrolled in tertiary education in 2012 was higher than the share of males. This was similar for both Chile and the EU-28. 58.9 % of EU-28 graduates in tertiary education were women, while the corresponding share for Chile was 56.0 %. That corresponded to a gender ratio (male/female) of 0.698 % in the EU-28 and 0.777 % in Chile[3].

A combination of social sciences, business and law was the largest field of study for both EU-28 and Chilean graduates (Table 6) although the concentration in these subjects was higher in the EU-28 than in Chile (34.7 % and 29.4 % respectively). Other differences between the EU-28 and Chile were in the ‘health and welfare’ and ‘education and training’ fields, where Chile had a higher share of graduates in 2012 than the EU-28. On the other hand, the EU-28 had a higher share of graduates in the fields of ‘humanities and art’ and also ‘science mathematics and computing’.

Numbers of teachers and pupils

In 2012, there were over 237 000 teachers and academic staff in Chile’s education system, with 85 % of them working in subsidised institutions and 15 % in private schools. Teachers in Chile’s public system earn less than other workers with a tertiary qualification. [4]

Table 8 shows the pupil/teacher ratio for several education levels in Chile. These ratios are calculated by dividing the number of full-time equivalent pupils and students by the number of full-time equivalent educational personnel. In 2012, the average number of pupils per teacher was generally lower in tertiary education and higher in primary education. From 2002 to 2012 the pupil/student ratio in Chile has decreased in all levels of education (meaning fewer students per teacher) while in the tertiary level it has been fairly constant. In Chilean pre-primary education there was a 62 % decrease in the pupil/teacher ratio from 2002 to 2011.

While the EU-28 and Chile have similar tendencies concerning the number of students per teacher, this indicator in Chile, in spite of the decrease in primary and secondary levels, was higher than in the EU-28. In the case of primary education the difference in 2012 was around 6 students and almost 10 in secondary education. For tertiary education the figures were closer: 15.3 students/teacher in Chile and 12.8 in the EU-28. 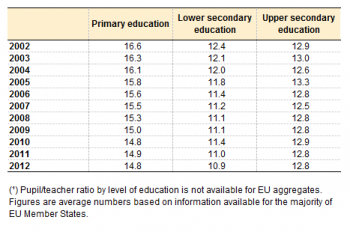 The sources for the statistics in this publication are produced from the database of Eurostat for the EU-28 and from the UNESCO Institute for Statistics and the Chilean Ministry of Education for Chilean data. More specifically:

The main source of all data is the joint UIS (UNESCO Institute of Statistics)/OECD/Eurostat (UOE) questionnaires on education statistics, which constitute the core database on education. The UOE data collection is an administrative data collection that is administered jointly by UNESCO-UIS, the OECD, and Eurostat.

It should be noted that data on education are not available in the INE Chile database. The Ministry of Education updates its information in Chilean Yearbook, Compendio Education, 2013 also used for this publication.

This statistical article was prepared jointly by Eurostat and by the National Statistical Institute (INE) in Chile, within the framework of the Memorandum of Understanding signed by both institutions in 2010.

The statistics refer to public and private, full-time and part-time education in the ordinary school and university system as defined in the international standard classification of education (ISCED). The statistics cover enrolments, personnel and expenditure.

The ISCED is used to define levels of education: tertiary education includes both programmes which are largely theoretically based and designed to provide qualifications for entry to advanced research programmes and professions with high skills requirements, as well as programmes which are classified at the same level of competencies but are more occupationally oriented and lead to direct labour market access.

Chile has a decentralised education system that is divided in four levels of education:

Enrolment data has been compiled in accordance with the ISCED 1997. The measurement used for this variable is the net school enrolment rate, which is the ratio of the total number of pupils of official school age enrolled in each level of education to the total population of official school age (except in the case of tertiary education, for which the gross school enrolment rate is used). Any comparison of these data across countries should take into account that countries vary with respect to the content and the length of each level.

The UOE [7] data collection covers all organised and sustained learning opportunities for children, youth and adults, including those with special educational needs, irrespective of the institutions or organisations providing them or the form in which they are delivered. They cover school-based general education and vocational education/training (including combined school- and work-based programmes such as dual system apprenticeship). Exclusively (initial and continuing) work-based training is not included in the statistics. Programmes or studies designated as ‘adult education’ or ‘continuing education’ are included only if the content is similar to regular educational programmes or lead to similar potential qualifications. The data collection covers all of a country’s domestic educational activity (i.e. within its own territory).

For more information on the transition to a quarterly continuous survey, see the EU-Education — Metadata page.

The indicator expenditure on education for Chile is the percentage of the gross domestic product, expressed in local currency at current market prices, allocated to education.

EU data on educational attainment level are from the EU-LFS. These data are in ISCED 1997 until 2013 and from 2014 in ISCED 2011, for details see EDAT metadata.


A full description is available from Eurostat’s classification server RAMON.