Archive:Children at risk of poverty or social exclusion - 2011

This article presents statistical data on the situation of children (aged 0-17) in the European Union (EU) who were at risk of poverty or social exclusion (AROPE). The analysis, based on 2011 data, compares them with adults (18-64) and the elderly (65 or over), and also takes a look at the impact of the household type, employment situation, parents' educational level, migrant background and severe material deprivation. All figures are based on EU-SILC (Statistics on income and living conditions). 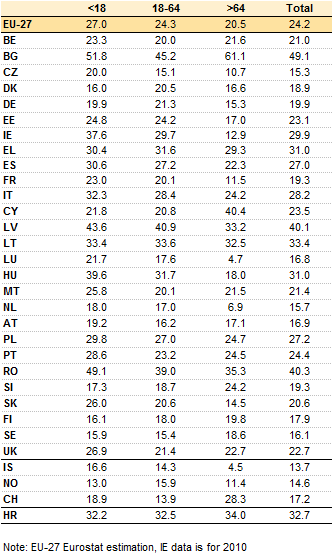 Figure 4: Children at risk of poverty by the highest level of education attained by parents living in the same household (% of population), EU-27, 2011
Source: Eurostat (ilc_li60) 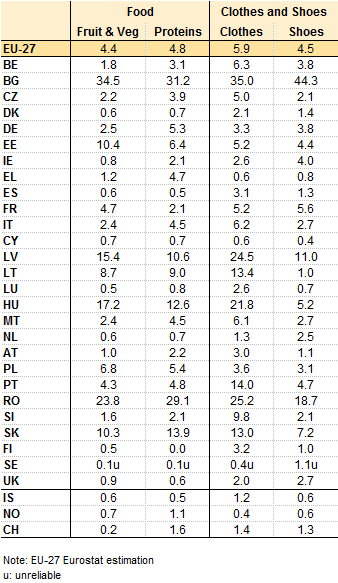 Children growing up in poverty and social exclusion are less likely to do well in school, enjoy good health and realise their full potential later in life, when they are at a higher risk of becoming unemployed and poor and socially excluded[1].

The AROPE indicator is defined as the share of the population in at least one of the following three conditions: 1) at risk of poverty, meaning below the poverty threshold, 2) in a situation of severe material deprivation, 3) living in a household with a very low work intensity. From 2008 to 2011, the AROPE for children rose in 21 Member States (see Figure 1).

Thirteen of the remaining Member States had increases of more than 1.0 pp (from 1.3pp in Sweden to 4.3pp for Spain). However, some countries recorded decreases. Major falls were recorded in Poland (- 3.1pp), the United Kingdom (-2.7pp), and Romania (-2.1pp).

Regarding the overall situation in 2011 (see Table 1), the share of children living in a household at risk of poverty or social exclusion ranged from 16-18 % in the Nordic countries, Slovenia and the Netherlands to 40-52 % in Hungary, Latvia, Romania and Bulgaria.

The AROPE rates differ for different age groups. Table 1 shows the rates for some population age groups. In 2011, 27.0% of children (aged 0-17) in the EU-27 were at risk of poverty or social exclusion compared to 24.3 % of adults (18-64) and 20.5% of the elderly (65 or over). Thus, children were the population age group at the highest risk of poverty or social exclusion. This was the situation in most Member States. There were some exceptions such as Bulgaria, Cyprus, Slovenia, Finland and Sweden where the elderly were most at risk. In Denmark, Germany, Greece and Lithuania, adults were the population age group with the highest risk. However, despite the fact that the elderly and adults respectively had the highest AROPE rates of these two groups of countries, child poverty ranked second highest in nearly all of them.

The main factors affecting child poverty, after taking account of the effect of social transfers in reducing child poverty, are the composition of the household in which the children live and the labour market situation of their parents, linked also to their level of education. There are also more vulnerable groups of children, such as those with migrant parents, that deserve particular attention.

Single parents and large households with dependent children were at the highest risk of poverty or social exclusion (See figure 2).

Family structure has a significant effect on the total household disposable income. In fact, different types of households have different at-risk-of-poverty profiles. When defining household types, the concept of dependent children (individuals aged 0-17 years and 18-24 years if inactive and living with at least one parent) is used instead of the concept of children (0-17 years) as a population age group.

Over 45 % of the low to very low work intensity households with dependent children were at risk of poverty.

Labour is the most important source of income for most households and thus has an impact on the at-risk-of-poverty rate, i.e. the share of people below the poverty threshold. However, not only jobless households are at risk of poverty. Therefore, to assess the relationship between employment and risk of poverty at household level, the concept of work intensity is used. Work intensity reflects how much working age adults in a household worked in relation to their total work potential in a year. For example, dependent children who live in households with very low work intensity (equal or inferior to 0.2) are those living in households where, on average, the adults worked less than 20 % of their time in a year.

In the EU-27, the highest at-risk-of-poverty rate recorded was for very low work intensity households with dependent children (67.9 %) (see Figure 3).

Impact of parents' education level on risk of poverty

Nearly half of children whose parents did not attain upper secondary education were at risk of poverty.

Education affects the type of job an individual can access. Indeed, the risk of poverty rises as the level of education diminishes. In the EU-27 in 2011 (Figure 4), nearly 50 % of children (aged 0-17) living in households in which the highest level of education attained by the parents living in the same household was lower secondary level (0-2 ISCED) were at risk of poverty. This effect remains even after controlling for family structure and the work intensity of the household.

At country level, the difference between the at-risk-of-poverty rates for children with parents with low and high levels of education ranged from 12.0-18.0 pp in Denmark and Finland to 65.0-75.0 pp in Hungary, Bulgaria, the Czech Republic, Slovakia and Romania.

Migrant background and risk of poverty

Migrant background also matters. In fact, children with a migrant background tend to be more exposed to poverty than the total child population. Overall, in 2011 (Figure 5), children (aged 0-17) with at least one foreign-born parent were at a greater risk of poverty (+13.0 pp higher) than children with native-born parents (see Data sources and availability). The greatest differences between children with foreign- and native-born parents were in France (+25.9 pp) and Greece (+23.9 pp). For seven other Member States for which data is available, the difference was more than 15.0 pp.

However, for some European countries migration was not an issue. These last three countries were the only Member States (for which data is available), besides Latvia (+0.7pp) and Hungary (-0.9 pp), where children with at least one foreign-born parent had a similar or lower at-risk-of poverty rate than children with native-born parents (-3.4 pp, -2.0 pp and -0.2 pp, respectively).

The severe material deprivation rate represents the share of children who live in households with an enforced lack of certain items at household level. In 2011, children (aged 0-17) in the EU-27 also had the highest rate (10.0 %) of severe material deprivation, higher than adults (8.9 %) and the elderly (7.2 %). Compared to 2008, there was a slight increase in the overall rate for children (+0.3 pp).

In table 2, the most significant items are shown. Regarding food items, 34.5 % of children in Bulgaria did not eat fresh fruit and vegetables once a day as these items could not be afforded. The situation was similar in Romania (23.8 %), Hungary (17.2 %) and Latvia (15.4 %). Similarly, in Bulgaria and Romania, around 30 % of children did not eat one meal with meat, chicken or fish or vegetarian equivalent (proteins) per day because the household could not afford it. For both items, in the EU-27, the average share was about 4.0-5.0 %.

Finally, 44.3 % of children in Bulgaria suffered from an enforced lack of two pair of properly fitting shoes (including a pair of allweather shoes). However, in 18 of the Member States, the share was below 4.0 %.

EU-SILC is the main source of information used in the European Union to develop indicators monitoring poverty and social exclusion.

People at-risk-of-poverty or social exclusion rate (AROPE): This indicator is the headline indicator to monitor the EU2020 Strategy poverty target. It reflects the share of the population which is either at risk of poverty, or severely materially deprived or lives in a household a very low work intensity.

Material Deprivation for Children (2009 module): A child is deprived in one item if the household cannot afford that item for at least one child (enforced lack). This module only includes 1-15 year-old children.

EU average: EU aggregates are computed as the population-weighted averages of national indicators.