This Statistics Explained article is outdated and has been archived - for recent articles on health see here. 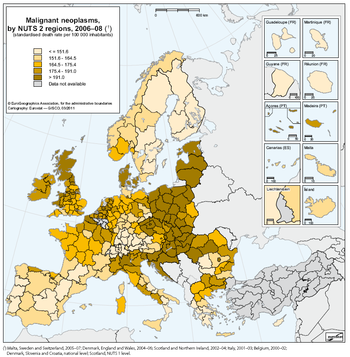 As a general rule, the mortality rate is higher among men than among women in all age groups. Although there are signs that the mortality gap is narrowing in some Member States, there are still significant differences between genders. 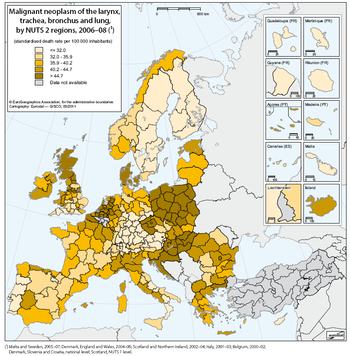 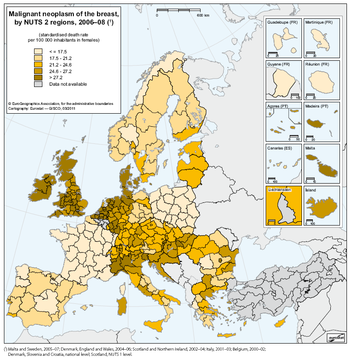 Causes of death data give information on diseases leading directly to death, so they can be used as an indicator to plan health services. In the EU-27, the major cause of death was disease of the circulatory system but in France cancer took the lead, with 3 717 more deaths for the average period 2006–08.

In the Netherlands, cancer was also higher than circulatory system diseases, with 661 more deaths in the average period 2007–09.

Looking at the 27 Member States, the three-year average standardised death rate for 2006–08 for all malignant neoplasms show that the highest rates were in Hungary (240.9), Poland (207.7) and the Czech Republic (205.7). The lowest rates were in Cyprus (120.4), Finland (138.6) and Portugal (153.3). Analysing the data by gender, for men, Lithuania and Estonia had the second and third highest rates while Germany had one of the lowest. For women, Ireland has one of the highest rates of malignant neoplasms, in particular of the larynx, trachea, bronchus and lung and breast cancer, while Spain has one of the lowest.

Combined malignant neoplasms of the larynx, trachea, bronchus and lung

The regions with the highest rates are Eszak-Alfold (80.7), Eszak-Magyarorszag (71.9) and Del-Dunantul (71.7) in Hungary. The lowest rates were found in the French regions of Martinique (13.3), Guadeloupe (13.6) and Guyane (13.8). Analysing the data by gender, the Hungarian regions again had high death rates, followed by the Polish region of Warminsko-Mazurskie (127.0) for men and Flevoland (36.4) for women. The lowest rates for women are the Italian regions of Molise (5.8), Basilicata and Calabria (5.9).

The three-year-average standardised death rate shows that for the EU-27, in all ages and both sexes, breast cancer, together with malignant neoplasms of the colon, was the second largest cause of death by cancer, with 13.3 deaths by 100 000 inhabitants. For women, this was the main cause of death in most Member States, with a rate of 23.9 per 100 000 inhabitants; for men the rate is 0.3. Exceptions are Hungary, the Netherlands and Poland, where this form of cancer is second to malignant neoplasms of the larynx, trachea, bronchus and lung. The highest rates of breast cancer for women are in Ireland (29.7), the Netherlands (28.9) and Hungary (26.7) while Spain (18.4), Portugal (19.6), and Finland (20.9) have the lowest rates.

An analysis of the 2008 crude death rate for women in the EU-27 by age group shows that breast cancer increases with age and that women over 85 are the most affected, with a rate of 223.8 per 100 000 inhabitants. In this age group, the highest rates were in Slovenia, Greece and Ireland and the lowest rates were in Romania, Lithuania and Bulgaria.

Malignant neoplasms of the prostate

The rate of prostate cancer increases with age. People aged 85 + have the highest rates, 657.0, for the EU 27. In general, prostate cancer starts to be a problem around the age of 50.

Information on causes of death are a prerequisite for monitoring the performance of health policy.

Regional indicators provide an insight into similarities, particularities and differences across regions in Europe.

There can be big differences between regions in the same country, and regions in different countries may be very similar. A thorough analysis of trends and variations in health indicators at regional level is therefore essential to plan and monitor action and programmes, formulate new policies, develop new strategies and contribute to evidencebased health policymaking.

Eurostat’s work on health statistics mainly focuses on further improvements that are needed to make the current data more comparable and complete and to extend regional coverage.

Cause of death (COD) statistics are based on information from death certificates. COD statistics record the underlying cause of death, i.e. to quote the definition adopted by the World Health Assembly, ‘the disease or injury which initiated the train of morbid events leading directly to death, or the circumstances of the accident or violence which produced the fatal injury’.

However, the CDR is strongly influenced by the population structure. In a relatively ‘old’ population there will be more deaths than in a ‘young’ one because mortality is higher in older age groups. For comparisons, the age effect can be taken into account by using a standard population. The standardised death rate (SDR) is a weighted average of age-specific mortality rates. The weighting factor is the age distribution of a standard reference population. The ‘standard European population’ defined by the World Health Organisation (WHO) is used for this purpose. Standardised death rates are expressed per 100 000 inhabitants and calculated for the 0–64 age group (‘premature death’), 65+ and for all ages. Causes of death are classified into the 65 on the ‘European shortlist’, which is based on the international statistical classification of diseases and related health problems (ICD) developed and maintained by the WHO.

Health is an important priority for Europeans, who expect to be protected against illness and disease at home, in the workplace and when travelling across the EU. Health issues cut across a range of topics — including consumer protection (food safety issues), safety at work and environmental and social policies — and thus have a considerable impact on the EU’s revised Lisbon strategy.

Member States generally have the responsibility for organising and delivering health services and healthcare. The EU has the responsibility to give added value by launching initiatives such as those on cross-border health threats and patient mobility, reducing health inequalities and addressing key health determinants. Gathering and assessing accurate, detailed information on health issues is vital for the EU to effectively design policies and target future action.

On 23 October 2007, the European Commission adopted a new strategy ‘Together for health: A strategic approach for the EU 2008–13’ to set objectives that will guide future work on health at European level. Within the European Commission, the strategy is supported by the ‘Second programme of community action in the field of health 2008–13’. This programme has been adopted with three broad objectives that align future act on on health more closely to the objectives of prosperity, solidarity and security, namely:

To monitor progress on these objectives, Regulation 1338/2008 of the European Parliament and of the Council on Community statistics on ‘public health and health and safety at work’ is the legal framework for compiling the required background statistics. It covers causes of death, health status, health determinants and healthcare.