Holders of doctorate degrees or other research qualifications are crucial to the creation, commercialization and dissemination of knowledge and to innovation. Until now, however, there has been little information about their careers and labour market mobility.

This article explains the statistics resulting from the international 'Survey on the careers of doctorate holders (CDH)', jointly carried out Eurostat, the Organisation for Economic Co-operation and Development (OECD) and UNESCO's Institute for Statistics (UIS). The survey covers most of the Member States of the European Union (EU), of EFTA as well as some of the most important other members of the OECD, such as the United States and Australia. 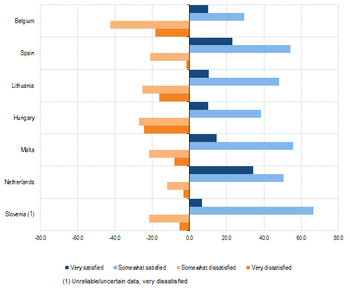 In most countries, the percentage of men with research qualifications exceeds 60 % of the total. Latvia has the highest share of women with research qualifications, and is actually the only country where women outnumber men in this category. Among younger age groups, there tends to be a higher share of women qualified to do research, as confirmed in the latest reports.

The age distribution varies considerably among countries. For several countries, the 35-44 age group is the largest; for others, the 35-44 and 45-54 groups are equally dominant. Overall, the population of 55 years or older accounts for only a small percentage in most countries with the exception of Latvia and Hungary.

More than half of the doctorate holders are employed as researchers in all countries. In several countries this percentage exceeds 75 %.

A closer look at the data reveals that salary is one of the main reasons for which most research qualification holders are dissatisfied with their work, along with the lack of benefits and opportunities for advancement.

Among research qualification holders, citizens of the reporting country, who have lived or stayed abroad in the past ten years, the majority lived in the European Union and a significant share in North America. Most of them moved back to their country of residence because of academic factors, family or personal reasons or due to other job related or economic factors.

The Careers of Doctorate Holders survey for the reference year 2006 (CDH 2006) was the first international, coordinated round of this data collection, and thus had a certain element of ‘pilot exercise’. In total, 26 countries participated in the initial CDH 2006 survey, i.e. most of the Member States of the European Union (EU), of EFTA and some of the most important other members of the OECD, such as the United States and Australia. Reference year for the first CDH was 2006, although there were a few exceptions (three countries used 2005 and two countries 2007 as reference year).

In 2010, the CDH survey was carried out for a second time with reference to the 2009 data (CDH 2009) for most of the countries, and to 2008 data for four countries. The survey was again conducted in 26 countries, i.e. 16 EU Member States, 3 EU candidate countries, 2 EFTA countries and 5 other OECD countries from the rest of the world.

Most of the countries carried out a dedicated survey on CDH, while others used data from the national Labour force survey (LFS) or other register data. Countries that used either the LFS or administrative data or population census to derive CDH figures tended to supply limited data in the output tables. In contrast, data derived from dedicated surveys was very complete in respect to the requirements set by the three international organizations. In CDH 2009, the number of countries carrying out a dedicated survey was increased, and this improved the completeness of the output tables compared to the pilot exercise.

With regard to the data sources used for the CDH in both collections, countries used multiple sources to build their sampling frame. Where more than one source was used, there has been an effort to avoid overlap. These data sources cover special characteristics of the target population. For example, sources, such as R & D surveys or registers concerning employment/business/enterprises cover employed doctorate holders awarded either in the reporting country or abroad; sources such as databases of universities and national registers of doctorate holders cover doctorate holders awarded in the reporting country. The combination of sources complements the survey frames with recent doctorate holders that have not yet been noted in an official register.

The quality of the data sources and consequently the efficacy of the survey frame are vital for the complete coverage of the target population. According to the guidelines, the target population should have included all doctorate holders (citizens of the reporting country or citizens of foreign countries) awarded within the country and abroad and being resident (permanent or non-permanent) in the country on the reference date. Departures from these recommendations mainly result from insufficient sources of data, which fail to cover (fully or partly) all the sub-groups of doctorate holders resident in the country. The sub-categories that were mostly under-covered were: ISCED six graduates whose doctorates were awarded abroad, unemployed and inactive graduates, non-permanent residents and foreign citizens.

As the national methods for collecting the data may vary between countries, reflecting the diversity of the national statistical systems, the CDH statistics have tried to harmonize this information and impose quality controls. The aim was to obtain high-quality results through a harmonized list of variables and indicators, together with their related definitions. Different countries are at different stages of the CDH statistics, in particular in reaching the final aim of full coverage of the target population. In a transition phase where countries seek to fully implement the methodological guidelines, incomplete coverage will have to be accepted to support their effort. However, this came at the expense of comparability of the data. In parallel with the work on analysis, quality control and publication of results from CDH 2006, the OECD's UIS and Eurostat are already preparing for the next round of the CDH survey. This next study will use 2009 as reference year but seek to improve the model questionnaire, the questionnaire manual and the methodological guidelines. These guidelines provide guidance on the target population, sampling frames, sampling design, etc., that should be respected in the national surveys in order to provide harmonised and comparable statistics.

A common, harmonized definition of the target population has been critical for the usefulness of the CDH data. The countries supplying the information often use different national sources and surveys for both the sampling frame (i.e. the overview of research qualification holders from which a sample for the survey is drawn) and the statistics.

The total target population of the CDH statistics consists of all people with an education at ISCED 6 level (i.e. research qualification holders, mainly doctorate holders). These can be divided into national populations, considered the target populations of national surveys in each country. Many highly skilled people tend to work and contribute to society with their skills and knowledge at advanced ages. However, one of the main aims of the CDH statistics, i.e. the measuring of mobility and career path, is targeting relatively young research qualification holders.

In summary, the national target populations for the CDH survey consist of people who in the reference year:

With these definitions and the assumption that all countries conducted the survey according to the common methodological guidelines and with the same year, the whole population of doctorate holders and other research qualification holders living in those countries is covered, without any overlaps. The resulting statistics should, thus, be complete and fully comparable between all participating countries.

Investment in research, development, education and skills is one of the European Union’s central policy areas. These key areas are essential to economic growth and to the development of the knowledge-based economy. The Europe 2020 strategy sets out a vision of Europe's social market economy for the 21st century. It aims to turn the EU into a smart, sustainable and inclusive economy that delivers high levels of employment, productivity and social cohesion. Innovation is a motor for economic progress: it is therefore a key element of Europe 2020.

Europe 2020 puts forward three priorities that go together and reinforce each other:

The European Commission has defined seven flagship initiatives to create progress under the Europe 2020 strategy. One of these is the "Innovation Union", supporting ‘Smart growth’. The Innovation Union initiative improves the framework for research and innovation in the EU. It also improves the access to finance. The aim is to ensure that innovative ideas can be turned into products and services that create growth and jobs.

ERA should inspire the best talents to enter research careers in Europe and stimulate industry to invest more in European research. It enables European researchers to develop strong links with partners around the world, so that Europe benefits from the progress of knowledge worldwide, contributes to global development and takes a leading role in international initiatives to solve global issues.

However, there are still national and institutional barriers which limit the development of ERA. In 2008, the European Commission and the Member States launched new initiatives to develop ERA, including the ‘Ljubljana Process’ to improve the political governance of ERA. Several initiatives on specific areas have been initiated. These initiatives aim at establishing partnerships with Member States and business, universities and research organizations to develop the ERA in their specific field.

Thus, in recent years the need to measure the career development and mobility of the highest-skilled segment of the labour force has increased, both within the EU and internationally.

Doctorate holders and other research qualification holders are not only the most qualified individuals in terms of educational accomplishment, but also the only ones specifically trained to conduct research.

The CDH statistics try to answer questions about the international mobility of highly skilled workers, as frequently discussed under the headings of ‘brain drain’ / ‘brain gain’ / ‘brain circulation’. In addition, these statistics address whether the quality and the number of research qualification holders educated correspond to labor market needs. Furthermore, the issue of whether the national labour markets remain the main frame for this highly skilled group is addressed. Other issues are how well the skills of the highest educated are used by society, as well as how attractive different careers are to the research qualification holders. The CDH statistics give policy makers a much stronger basis for addressing these issues.