Data from April 2013. Most recent data: Further Eurostat information, Main tables and Database This Statistics Explained article is outdated and has been archived - for recent articles on structural business statistics see here. This article focuses on the non-financial business economy and belongs to a set of statistical articles which analyse the structure and characteristics of the economic activities within the non-financial business economy of the European Union (EU). 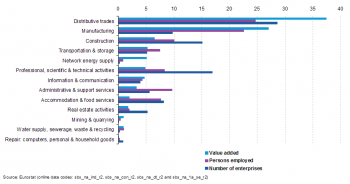 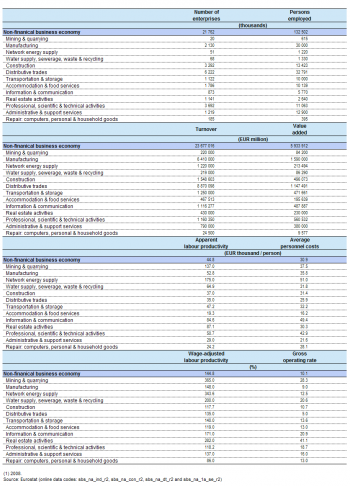 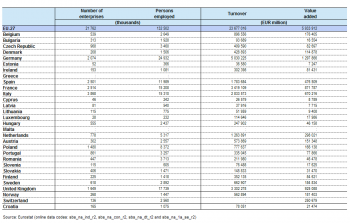 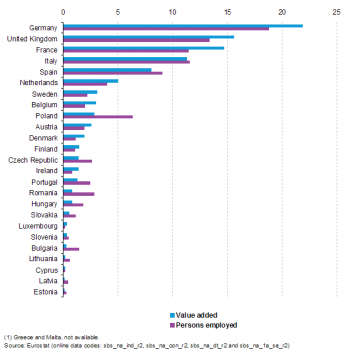 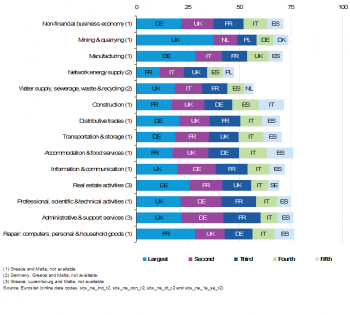 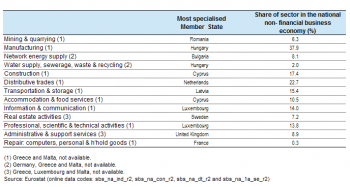 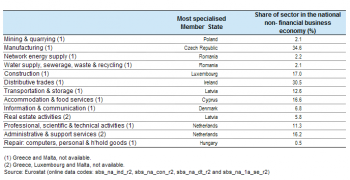 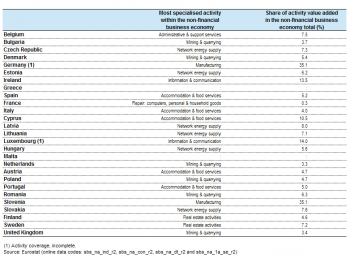 Size and structure of the non-financial business economy

Apparent labour productivity averaged EUR 44.8 thousand per person employed in the EU-27’s non-financial business economy in 2010, ranging from EUR 19.3 thousand per person employed in accommodation and food services (Section I) to EUR 175.0 thousand per person employed for network energy supply (Section D). Average personnel costs were also lowest for the accommodation and food services sector (EUR 16.2 thousand per employee) and highest in network energy supply (EUR 51.0 thousand per employee); the non-financial business economy average was EUR 30.9 thousand per employee. It should be noted that both of these indicators are based on a simple head count of employment and so are influenced, at least in part, by the extent of part-time employment. The influence of part-time employment is largely removed by combining these two measures into the wage-adjusted labour productivity ratio: for the non-financial business economy this ratio was valued at 144.8 % in 2010, indicating that average labour productivity was 44.8 % higher than average personnel costs. This indicator was below 100 % for the small sector covering the repair of computers, personal and household goods (Division 95) and rose to above 300 % for the network energy supply sector and for the mining and quarrying sector (Section B).

As can be seen from Figure 2, a Member State’s share of the EU-27’s non-financial business economy varies substantially depending whether it is measured in terms of value added or employment. Those with higher shares of EU-27 value added than their respective shares of the EU-27 workforce — for example, Germany, the United Kingdom, France, the Netherlands, Sweden and Belgium — had above average apparent labour productivity ratios.

The share of the five largest Member States in the EU-27’s value added gives an impression of geographical concentration; the average share for the non-financial business economy was 71.5 % in 2010. An analysis at the NACE section level — as shown in Figure 3 — indicates that the highest concentration of activity with the five largest Member States was for three service sectors, namely: accommodation and food services; administrative and support services (Section N); and the repair of computers, personal and household goods. By contrast, the lowest degree of concentration was recorded for distributive trades, where the five largest Member States accounted for 69.6 % of non-financial business economy value added; the network energy supply sector as well as the water supply, sewerage, waste and recycling sector (Section E) had lower levels of concentration by this measure, but it should be noted that German data is not available for these sectors, thus strongly influencing the results. Generally, in each sector the five largest Member States were the five Member States with the largest economies overall (Germany, Spain, France, Italy and the United Kingdom). The only exceptions were for: mining and quarrying (Section B) — where Poland was the third largest and Denmark the fifth largest producer); the network energy supply sector — where, in the absence of Germany, Poland was the fifth largest producer; the water, supply, sewerage, waste and recycling sector — where, in the absence of Germany, the Netherlands was the fifth largest producer; and real estate activities (Section L) — where the recent weakness of the Spanish housing market may have helped promote Sweden to occupy fifth position in the ranking.

The most specialised EU Member State in an activity is the one where that activity’s share of the non-financial business economy is highest, regardless of whether the Member State is large or small. In contrast to concentration measures that typically highlight the largest Member States, measures of specialisation often identify smaller or medium-sized Member States. In only two of the activities presented in Tables 4 or 5 were large Member States the most specialised; in both cases this concerned specialisation in value added terms for services activities — the repair of computers, personal and household goods in France and administrative and support services in the United Kingdom. Some specialisations are due to the availability of natural resources, for example, the Romanian, Danish and Polish specialisation in mining and quarrying.

Table 6 shows the activity in which each EU Member State is most specialised, relative to the EU-27 as a whole — this is based on value added shares in the non-financial business economy. For just over half of the 25 Member States for which data are available (no information for Greece or Malta), the activity in which they were most specialised was an industrial activity (mining and quarrying; manufacturing; network energy supply; or water supply, sewerage, waste and recycling). In Germany and Slovenia, the manufacturing sector accounted for just over one third of non-financial business economy value added in 2010. The mining and quarrying sector was generally much smaller, but the uneven distribution of natural resources meant that several Member States reported their highest degree of specialisation within this activity: this was the case for Bulgaria, Denmark, the Netherlands, Poland, Romania and the United Kingdom. Six of the Member States that joined the EU in 2004 were relatively specialised in the network energy supply sector, they were: the Czech Republic, Estonia, Latvia, Lithuania, Hungary and Slovakia. The tourist destinations of Spain, Italy, Cyprus, Austria and Portugal recorded their highest degree of specialisation within the accommodation and food services sector, while Finland and Sweden registered their highest specialisation for real estate activities, and Ireland and Luxembourg recorded their highest degree of specialisation for information and communication services (Section J). There were two Member States that stood alone, as Belgium was the only country to be highly specialised in administrative and support services and France was the only country to be highly specialised in the repair of computers, personal and household goods. It should be noted that some activities are relatively small across the whole of the EU-27, which means that even in a Member State with a high specialisation relative to the EU-27 average this activity may in fact only contribute a small proportion of non-financial business economy value added, as is the case, for example, in the French repair of computers, personal and household goods sector (which accounted for just 0.3 % of non-financial business economy value added). None of the Member States were highly specialised in the construction sector, the water supply, sewerage, waste and recycling sector, or the distributive trades sector. Each of these sectors is characterised as being a basic part of the economy, often serving local customers; these activities are found in every region and country of the EU and as a result, they are less likely to display high degrees of specialisation, given their widespread distribution across the whole of the EU’s territory.

Eurostat’s structural business statistics describe the structure, conduct and performance of economic activities, down to the most detailed activity level (several hundred sectors).

The analysis presented in this article is based on the main SBS dataset which is published annually. These series provide information for each EU Member State as well as a number of non-member countries at a detailed level according to the activity classification, NACE. Data are available for a wide range of variables. In addition, a set of derived indicators has been compiled: for example, ratios of monetary characteristics or per head values.

In October 2010, the European Commission presented a Communication on a renewed industrial policy. ‘An industrial policy for the globalisation era’ provides a blueprint that puts industrial competitiveness and sustainability centre stage. It is a flagship initiative that forms part of the Europe 2020 strategy, and sets out a strategy that aims to boost growth and jobs by maintaining and supporting a strong, diversified and competitive industrial base in Europe, offering well-paid jobs while becoming less carbon intensive. The initiative establishes a strategic agenda and proposes some broad cross-sectoral measures, as well as tailor-made actions for specific industries, mainly targeting the so-called ‘green innovation’ performance of these sectors.

The internal market remains one of the EU’s most important priorities. The central principles governing the internal market for services were set out in the EC Treaty. This guarantees EU enterprises the freedom to establish themselves in other Member States and the freedom to provide services on the territory of another Member State (other than the one in which they are established). The objective of the Services Directive 2006/123/EC of 12 December 2006, on services in the internal market, is to eliminate obstacles to trade in services, thus allowing the development of cross-border operations. It is intended to improve competitiveness, not just of service enterprises but also of European industry as a whole. In December 2006, this Directive was adopted by the European Parliament and the Council with transposition by the EU Member States required by the end of 2009. It is hoped that the Directive will help achieve potential economic growth and job creation. By providing for administrative simplification, it also supports the better regulation agenda.

In April 2011, leading up to the 20th anniversary of the beginning of the single market, the European Commission released a Communication titled ‘Single Market Act — twelve levers to boost growth and strengthen confidence’ (COM(2011) 206 final), aimed at improving the single market for businesses, workers and consumers — see the introductory article for industry, trade and services for more information.

Other analyses of the business economy by NACE Rev. 2 sector