This article belongs to a set of statistical articles which analyse the structure, development and characteristics of the various economic activities in the European Union (EU). The present article covers alcoholic and non-alcoholic beverages, corresponding to NACE Rev 1.1 Group 15.9, which is part of the food, beverages and tobacco sector. The beverages covered in this article are:

It should be noted that this article excludes the agricultural activities of growing, farming, rearing and hunting and also fishing (NACE Divisions 01 and 05). A number of products, such as wine, are also sold directly by agricultural holdings. As such, their weight is likely to be under-reported in this article, as part of their production is recorded as an agricultural activity. 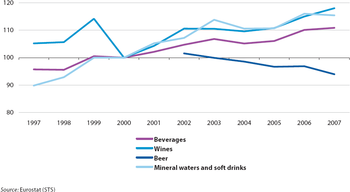 There were an estimated 22.0 thousand enterprises across the EU-27 that manufactured beverages as their main activity in 2006. These enterprises employed a little less than half a million persons (the equivalent of about one in every ten persons working in the food, beverages and tobacco manufacturing workforce). The beverages manufacturing sector of the EU-27 generated an estimated EUR 34.0 billion of value added in 2006. After the manufacture of bread, fresh pastry goods and cakes (NACE Group 15.8), this represented the second largest contribution (17.3 %) at the NACE group level to the total value added of the food, beverages and tobacco manufacturing sector in 2006.

There was an upward trend in the production index of beverages in the EU-27 in the ten years through to 2007 (with an average increase of 1.5 % per year). This long-term evolution was similar to that observed for the food, beverages and tobacco manufacturing sector, albeit somewhat more volatile in nature. The overall growth in the EU-27 index of production for beverages was driven mainly by higher growth for mineral waters and soft drinks (average annual growth of 2.5 %, despite a small decline in 2007) and wine (average growth of 1.4 % per year being underpinned by the increases in 2006 and 2007). In contrast, the production index for beer in 2007 was 6.1 % less than in 2000.

The beverages sector recorded the highest average personnel costs (EUR 36.4 thousand per employee) within the EU-27 in 2006 among the NACE groups that make-up the food, beverages and tobacco manufacturing sector. Nevertheless, total personnel costs for beverages manufacturing in the EU-27 represented only a slightly higher proportion of total operating expenditure (15.1 %) than was the case across food, beverages and tobacco manufacturing as a whole (13.8 %), suggesting that this activity had a relatively small but well-remunerated workforce.

Relatively high wage adjusted labour productivity ratios were a common feature across almost all of the Member States within the beverages manufacturing sector. In the case of Poland, the ratio was particularly notable (865.2 % in 2005) – which was more than double the national average for the whole of food, beverages and tobacco manufacturing (361.7 %), which was in itself also by far the highest ratio among the Member States.

As these enterprises not only produce goods for final consumption but also intermediate products for other manufacturing activities, they are affected by a broad scope of legislation. The main legislative areas affecting the EU’s food, beverages and tobacco manufacturing sector, however, tend to involve international trade agreements, or food and feed legislation. As a majority of the EU’s agricultural production is processed by the food, beverages and tobacco manufacturing sector, developments in Common agricultural policy and associated Common Market Organisations can have important implications for costs and processes in the food chain. Regarding food legislation, the European Parliament and the Council proposed an update of the laws regarding the provision of information to consumers (COM(2008) 40 final) in 2008, in order to clarify and consolidate existing regulations. In part, this proposal was built on a 2007 White Paper covering a Strategy for Europe on Nutrition, Overweight and Obesity (COM(2007) 279 final), which stressed the need for consumers to have access to clear, consistent and evidence-based nutritional information.

A new Council Directive (Council Directive 2008/118/EC) clarifying the general arrangements for products subject to excise duty (alcoholic beverages, tobacco products and energy products) entered into force on the 15 January 2009 and will apply across the EU from 1 April 2010. Rules on the labelling of some alcoholic drinks was also updated; the definition, description, presentation, labelling and protection of geographical indications of spirit drinks was updated by the European Parliament and Council in January 2008, and that of certain wine products in April 2007.