This Statistics Explained article is outdated and has been archived - for recent articles on transport see here.

The rapid growth of air transport has been one of the most significant developments in the transport sector, both in Europe and all over the world. Intra-EU air transport of passengers (including domestic flights) more than doubled between 1995 and 2009. The events of 11 September 2001 stalled growth in 2002, but it rapidly bounced back.

The liberalisation of the air transport market in the EU greatly helped this development, most evident in the expansion of low-cost airlines. This led to the rapid growth of several smaller regional airports, which are less congested and charge lower landing fees than large airports in the capital regions. However, from 2008 to 2009 most airports experienced a sharp decline in passenger and freight transport, reflecting the fall in economic activity and international trade during the worldwide economic crisis. 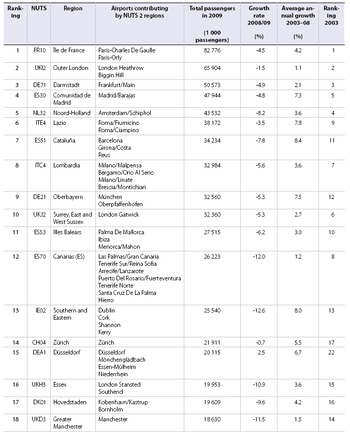 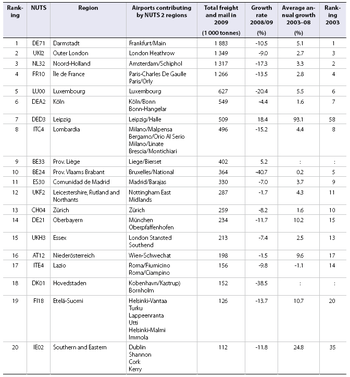 The top-ranking regions in terms of the total number of air passengers are the regions that are home to capital cities in western Europe. The list is headed by Île-de-France, with a total of 82.8 million passengers for Paris-Charles de Gaulle and Paris-Orly airports, followed by Outer London (Heathrow) with 65.9 million passengers, Darmstadt with Frankfurt/Main airport (50.6 million), Comunidad de Madrid (47.9 million), Noord-Holland (Amsterdam/ Schiphol: 43.5 million) and Lazio with Roma/Fiumicino and Roma/Ciampino airports (38.2 million).

Although this is not visible from Table 1, a significant number of smaller regional airports are among the fastest growing, due to the success of low-cost carriers using them as their main hubs.

Düsseldorf was the only one of the top 20 airports for passenger transport to record an increase in passenger numbers between 2008 and 2009. Zürich, Outer London (Heathrow) and Oslo og Akershus (Gardermoen) had the lowest losses in passenger numbers, with less than 2 %. The other top 20 regions for air passenger transport faced losses of more than 3.5 %, with the highest losses in the Canarias (– 12 %) and Southern and Eastern Ireland (Dublin, Cork and Shannon, – 12.6 %). By contrast, all of the top 20 regions recorded positive average annual growth over the previous five-year period.

While the total volume of air freight is limited compared with the much higher volumes of freight transported by road, rail, inland waterways and especially sea, air freight is important and growing steadily for articles with high added value, perishable goods (especially food) and express parcels.

Air freight volumes fell even further than the volume of air passengers from 2008 to 2009, with 10 of the top 20 regions for air freight and mail transport recording losses of 10 % or more. The only regions in the top 20 to record an increase over this period were Leipzig/Halle (+ 18.4 %) and Province de Liège (+ 5.2 %). Much of the increase in Leipzig/Halle can be explained by a major international express mail company moving its European hub from Brussels to Leipzig/Halle in the middle of 2008. Correspondingly, the air freight volume for Vlaams-Brabant (Bruxelles) fell by 40.7 % in this period. Hovedstaden (København/Kastrup) also experienced a dramatic fall, with 38.5 % less air freight handled in 2009 than in 2008.

Currently, data on air transport are collected under Regulation 437/2003 of the European Parliament and of the Council on statistical returns in respect of the carriage of passengers, freight and mail by air. This regulation provides detailed monthly data on airports handling more than 150 000 passengers a year. The data collected at airport level are then aggregated at NUTS 2 regional level.

Eurostat collects, compiles and disseminates a variety of regional indicators. Data on air transport for passengers and goods are derived directly from data collected under legal acts.

Regional transport indicators are available on Eurostat’s website under ‘Transport’ and are mirrored in the ‘General and regional statistics’. Full datasets and predefined tables are available, covering infrastructure, the vehicle fleet, journeys by road, rail, sea and air and road safety (numbers of deaths and injuries in road accidents). All data are annual.

The data used in the maps and tables were extracted from Eurostat’s website, although not all the derived indicators are directly available there.

Further information can be found in Eurostat’s Statistics in focus series on transport issues.

The data presented in the tables in this article show a number of interrelationships between regions’ economic and geographical characteristics and the structure of the European transport system. They provide basic figures on the regional distribution of air. However, the data presented in this article are only part of the wider set of regional transport statistics available in Eurostat’s databases. Regional transport statistics show patterns of variation across regions, where transport-related variables are often closely related to levels of economic activity.

Transport policies are at the very heart of efforts to reduce regional inequality and improve regional cohesion. In the enlarged European Union, economic and infrastructure disparities are now more evident than before. Furthermore, European transport policies seek to reduce the emission of CO2 and other substances detrimental to the global climate, through a more intelligent transport system and a better mix of transport modes. One of Eurostat’s longterm objectives is to expand the current regional transport indicators in order to provide a better understanding of the impact of transport policies on economic growth, transport needs and the environment.