This article belongs to a set of statistical articles which analyse the structure, development and characteristics of the various economic activities in the European Union (EU). According to the statistical classification of economic activities in the EU (NACE Rev 1.1), the present article covers air transport sector statistics, corresponding to NACE Division 62, which is part of the transport and storage sector. The activities covered in this article are: 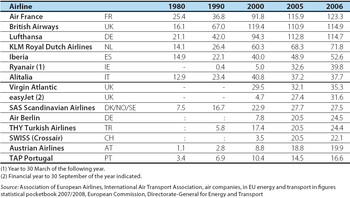 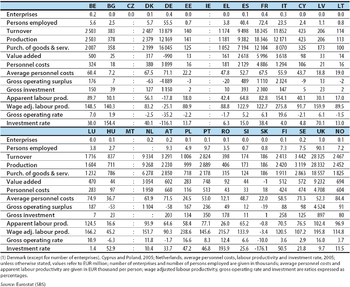 Three tenths of the EU-27's value added in air transport was generated in the United Kingdom alone, while France's contribution was one fifth. For the third consecutive year Germany recorded a negative value added for air transport in 2006, and this Member State's relative size can be better expressed by its 13.9 % share of the EU-27 workforce.

The EU-27's air transport sector recorded low average turnover growth between 2000 and 2004, however in the most recent years for which data are available (2005 to 2007) it has recorded double-digit annual growth each year. Concerning the employment index, air transport in the EU-27 recorded an annual average growth rate of 0.5 % between 1998 and 2007, but this was composed of strong growth in 1999 and 2000, followed by a more gentle decline most years since then, with a 1.0 % increase in 2006 the only significant recent employment gain in this sector.

Transport of goods and passengers

Turning to traffic figures, the United Kingdom accounted for close to one quarter (24.2 %) of all passengers on flights originating or ending outside of the EU-27 in 2007, and Germany just under one fifth (19.9 %). For intra-EU air travel, the United Kingdom again topped the ranking (19.4 % of passengers carried between EU-27 Member States) followed by Spain (15.6 %); Spain had by far the largest market for domestic flights. The volume of passenger traffic (based on passenger kilometres rather than passenger numbers) for a selection of airlines shows that the three largest airlines from France, the United Kingdom and Germany dominated. An analysis of the rates of change between 2005 and 2006 shows an increase for all of the selected airlines except SAS Scandinavian Airlines, with the fastest rates of growth recorded by Ryanair, THY Turkish Airlines and Air Berlin.

EU transport policy is based upon the 2001 White paper ‘European transport policy for 2010: time to decide’ and the 2006 mid-term review in the European Commission's communication (COM(2006) 314) ‘Keep Europe moving – sustainable mobility for our continent’. In 2007 the European Commission adopted a communication (COM(2007) 606) on ‘Keeping freight moving’, to make rail freight more competitive, facilitate modernisation of ports, and review progress in the development of sea shipping.

Environmental issues remain of great importance to this sector, as transport is a major source of emissions and noise. In 2008 the European Commission put forward a package of measures related to road and rail transport referred to as ‘Greening Transport’. This included a communication (COM(2008) 433) summarising the packages and initiatives planned for 2009, a strategy to internalise the cost of transport externalities, a proposal for a Directive on road tolls for lorries, and a communication on rail noise. The overall thrust of the package is to try to move towards more sustainable transport.

The expansion of air traffic has faced criticism, notably because of the growing levels of air emissions and noise from this means of transport, although emissions have grown more slowly than air traffic volumes due to technological improvements. In November 2008 a Directive was adopted (2008/101) to include aviation in the existing emissions trading scheme for carbon dioxide, starting from 2012.

Growth in EU air traffic has occurred during a period of market liberalisation and structural change, with an increased number of operators, particularly low-cost carriers. The development of low-cost carriers has expanded the market for air travel, by offering the possibility of relatively cheap flights for the leisure market. The three largest low-cost carriers in Europe in 2006 in terms of revenue passenger-kilometres were Ryanair, easyJet and Air Berlin. Increased competition, allied with greater costs (notably for fuel), and the rapidly worsening economic climate, have led to a number of airlines struggling to continue operations, with Alitalia, for example, entering administration in 2008 before emerging in a restructured form in 2009.

In September 2008, a Regulation (1008/2008) for air services was adopted, updating legislation from 1992. With the aims of ensuring more competition, and improving quality, it covers a wide range of issues, such as price transparency, oversight of operating licences, market access, aircraft registration, and public service obligations.