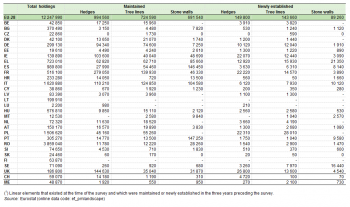 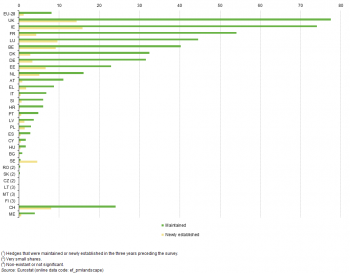 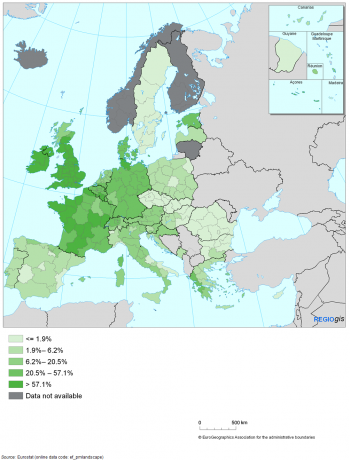 Map 1: Share of holdings which maintained hedges in the past three years, by NUTS 2 region, 2008–10
(% share of the total number of holdings) - Source: Eurostat (ef_pmlandscape) 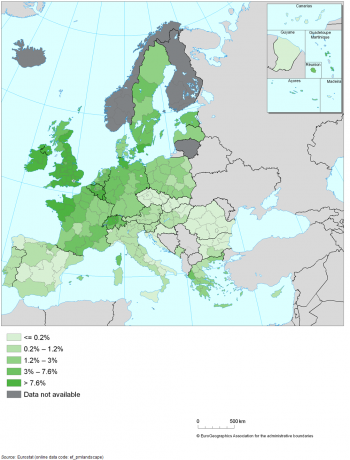 Map 2: Share of holdings which established hedges in the past three years, by NUTS 2 region, 2008–10
(% share of the total number of holdings) - Source: Eurostat (ef_pmlandscape) 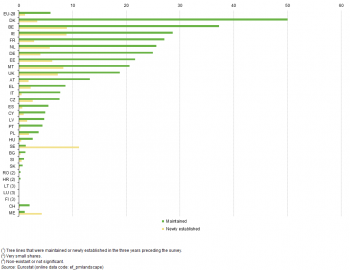 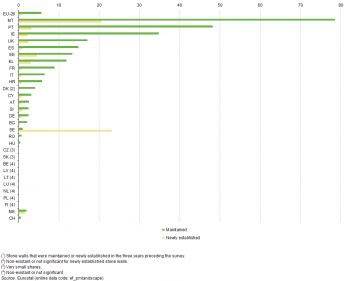 This article presents statistics on landscape features in the European Union (EU).

Many of the landscape features associated with agriculture, such as hedges, stone walls, tree lines, ditches and other watercourses, are the result of historical farming practices and human endeavour. In many countries, the open field system of farming on land that was typical centuries ago was replaced by a system of enclosures. This reorganisation of land resulted in visible demarcation barriers — often using the natural resources available locally — denoting areas belonging to private landowners and other local boundaries, as well as practical barriers for keeping livestock under control). In a number of other countries, landscape features were used or built to increase cultivated land areas (such as walls for terraces) and as a barrier to prevent grazing in specific areas (such as in olive groves or vineyards). The choice of feature was often a function of the climatic conditions (hedges being very difficult to grow in dry conditions and ditches being useful to drain rain soaked fields) and geology (rocks and stones being prevalent in some landscapes but not others).

Over time, these linear features developed to provide a number of other functions, such as: shelter and shade for farm animals and shelter for crops from possible wind damage; wildlife habitats and nature corridors; firewood, coppice wood (such as for fencing, poles, baskets and charcoal), wild berries and small game for some of the rural population, and; a natural barrier to restrict soil and water movement thus reducing soil erosion and protecting water quality.

Landscape features are found on many of the farms in the European Union (EU) (see Table 1):

Note that agricultural holdings can both maintain and establish multiple landscape features.

Hedges are a common feature of the British and Irish landscape, where enclosing common land for raising sheep became a feature of the 18th and 19th century enclosure movement. About three quarters of all agricultural holdings in the United Kingdom (77.4 %) and Ireland (74.1 %) maintained hedges in the three years prior to the 2010 survey, with about one in every six or seven holdings also involved in establishing new hedges; these were by far the highest proportions across the EU Member States (see Figure 1). By contrast, hedge maintenance was not an activity carried out on farms in the Czech Republic, Lithuania, Malta, Romania, Slovakia, Finland or Sweden. This disparity within the EU is underlined at a regional level (principally for NUTS level 2 regions); in England, Wales, Northern Ireland, Ireland, the south of Belgium, and the west and centre of France a clear majority (at least 57.1 %) of holdings maintained hedges (see Map 5.1). These were more or less the same NUTS level 2 regions where new hedges were most likely to have been established in the three years prior to the 2010 survey (see Map 5.2).

One half (50.0 %) of the agricultural holdings in Denmark maintained tree lines (such as tree avenues or alleys) in the three years prior to the 2010 survey, the highest proportion among the EU Member States and much higher than the 5.9 % average across the EU-28 as a whole (see Figure 2). Relatively high proportions of holdings in Belgium, Ireland, France, the Netherlands and Germany (between 25 % and 38 %) maintained tree lines. By contrast, tree lines were not a landscape feature typical of a number of Member States such as Croatia, Lithuania, Luxembourg, Romania and Finland.

The use of landscape features in Sweden appears to be on the rise: hedges were established on 4.6 % of all agricultural holdings in 2010, tree lines planted on 11.2 % of holdings and stone walls were built on 23.1 % of holdings. These developments are being supported by a specific measure financed under the rural development programme.

The data on landscape features that have been used in this publication were collected for the first time in 2010 as part of the survey on agricultural production methods (SAPM). This survey was carried out together with the farm structure survey (FSS) as a census in some countries, whereas in other countries the SAPM survey was carried out as a sample survey and data were linked to data from the FSS census at the level of the individual holding to enable cross comparisons of characteristics collected in SAPM and characteristics collected in the FSS census.

The SAPM was conducted consistently throughout the EU with a common methodology providing therefore comparable and representative statistics across countries, at regional levels down to NUTS level 2 (NUTS level 1 in Germany).

As farming systems became more intensive and mechanised, the margins of fields were often grubbed up or destroyed to allow more efficient use of the land by ever larger and more specialised machines. However, these landscape features have become recognised as an increasingly important resource for the environment. Indeed, under the current Common Agricultural Policy (CAP), in order to receive a full decoupled direct payment, a farmer has to comply with good agricultural and environmental condition (GAEC) standards. The objective of these standards is to ensure that all agricultural land, especially land which is no longer used for production purposes and permanent pasture, is maintained in good condition. Under Council Regulation (EC) 73/2009, the maintenance of landscape features, including, where appropriate, hedges, ponds, ditches, trees in line, in group or isolated, and field margins is specified as a compulsory GAEC standard, whereby farmers should ensure minimum levels of maintenance and avoid the deterioration of habitats.