'This Statistics Explained article is outdated and has been archived - for recent articles on Agri-environment indicators see here.

This article is part of a set of statistical articles based on the Eurostat online publication "Agriculture, forestry and fishery statistics". It focuses on ammonia emissions from agriculture and aims to give an overview of selected statistics and indicators in the European Union (EU). 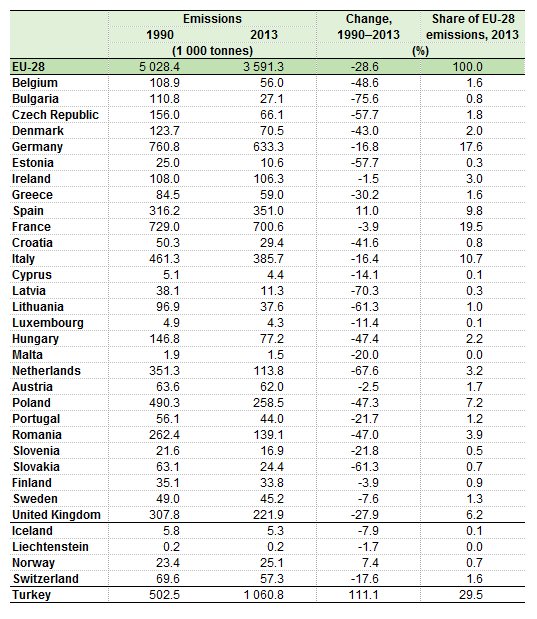 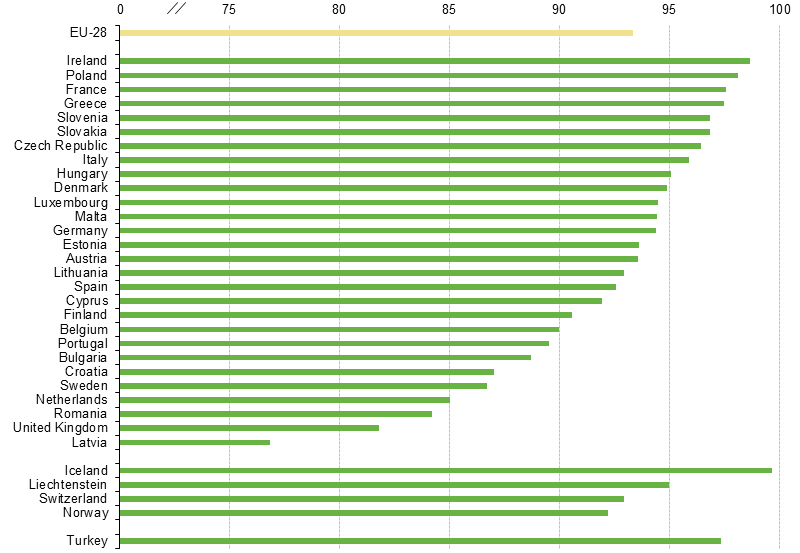 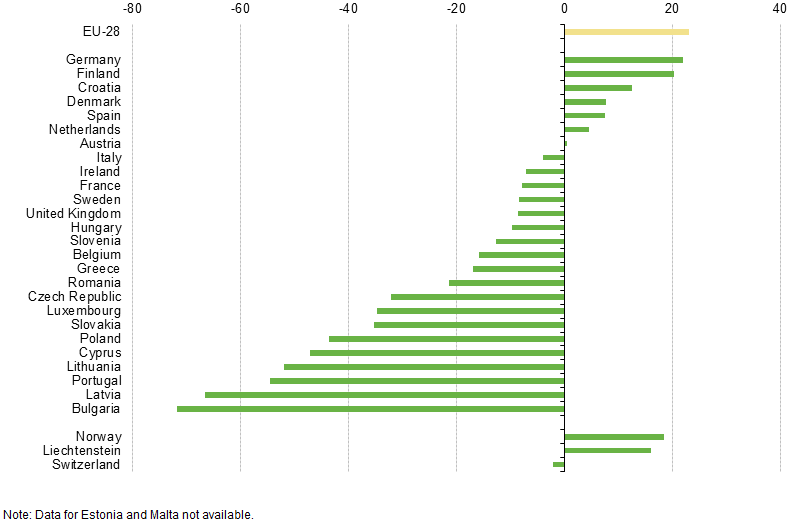 Figure 5: Change in ammonia emissions between 2005 and 2013 compared to Goethenburg commitments for 2020
(% distance from reduction targets)
Source: European Environment Agency

Ammonia (NH3) is a colourless, pungent-smelling and corrosive gas that is produced by the decay of organic vegetable matter and from the excrement of humans and animals. When released into the atmosphere, ammonia increases the level of air pollution. Once deposited in water and soils, it can potentially cause two major types of environmental damage, acidification] and eutrophication (where over-fertilisation causes oxygen depletion in water bodies as they become suffocated with weeds), both of which can harm sensitive vegetation systems, biodiversity and water quality.

Developments in ammonia gas emissions from agriculture by Member State

France accounted for almost one fifth (19.5 %) of ammonia emissions from agriculture in the EU-28 in 2013 and Germany accounted for the next highest proportion (17.6 %). However, the trends in emission levels between these two Member States contrasted starkly: ammonia emissions from agriculture declined by 16.8 % in Germany between 1990 and 2013 but remained relatively unchanged (– 3.9 %) throughout the period in France. Among other EU Member States, developments were even more contrasting, with declines of 60–75 % in Bulgaria, Latvia, Lithuania, the Netherlands and Slovakia, but with a rise in Spain (+ 11.0 %). The main contributory reason for the increase in ammonia emissions from agriculture observed in Spain was the increased density of cattle, swine and poultry production. By contrast, the considerable reduction in emissions from agriculture that were recorded in the majority of countries was due mainly to changes in the management of organic manures, to the decreased use of nitrogenous fertilisers and to some reduction in livestock numbers (especially for cattle). By way of example, the considerable reduction in ammonia emissions from agriculture in the Netherlands was principally due to a change in manure management practices: manure spreading onto the surface of the soil has been phased out and replaced by either injection or ‘band spreading’ with a rapid incorporation of manure into the soil. Most ammonia volatilises within the first 12 hours, so speed of incorporation into the soil reduces nitrogen loss considerably.

Agricultural activity was responsible for the majority of ammonia emissions in each of the EU Member States in 2013 (see Figure 2). The wider adoption of new manure management and fertiliser application practices, of dietary changes that reduce nitrogen excretion from livestock, and of more efficient use of nitrogen remain the key supply-side drivers in reducing total ammonia emissions. Nevertheless, in a few countries the reductions from other sources (such as solid waste disposal on land in Bulgaria and waste water handling in Romania) are also key to the continued overall reduction in ammonia emissions.

The EU-28’s total emissions of ammonia declined by 27.0 % between 1990 and 2013 to 3.8 million tonnes, a level below the reduced emission ceilings target of 4.33 million tonnes that was agreed for the individual EU Member States under the Long-range Transboundary Air Pollution (LRTAP) Convention (see Figure 3). The decline in EU-28 emissions was sharpest in the period from 1990–95 (a 17.9 % reduction). After relatively unchanged levels from 1995–99, ammonia emissions then declined relatively steadily through until 2010 before stabilising in 2011 and continuing with a slight downward trend until 2013.

The majority of EU Member States also met their individual LRTAP targets for 2010, the principal exceptions being Germany, Finland, Croatia, Denmark, Spain and the Netherlands (see Figure 4); Liechtenstein and Norway also fell short of their targets. The downward pressure on ammonia emissions was further embraced with the ratification of a revised Gothenburg Protocol on the 4 May 2012 in Geneva. The amendments to the 1999 Protocol detail the national emission reduction commitments from 2005 level for main air pollutants including ammonia to be achieved in 2020 and beyond.

Figure 5 compares the national ammonia emission reductions between 2005 and of 2013 with the targets commitments for 2020 set out in revised Gothenburg Protocol. In 12 EU Member States, the level of reduction was already below the target set out in the revised Protocol, among which Bulgaria, Croatia and Cyprus were ahead by more than 10 percentage points (pp). The 2013 ammonia emissions in the Czech Republic, Austria, Germany, France and Estonia were still above the 2005 values. With a deficit of more than 9 pp, Estonia, Finland and Sweden were the countries that remained further away from their 2020 targets.

The ammonia emissions data used in this publication are the official national data included in the EU emissions inventory report for the period 1990–2013, collected under the UNECE convention on long-range transboundary atmospheric pollution LRTAP convention. Supporting livestock and fertiliser use information is taken from the 2013 official national greenhouse gas data submitted to the EU’s greenhouse gas monitoring mechanism and the European Environment Agency’s (EAA) European environment information and observation network (EIONET). International guidelines foresee estimates of greenhouse gases being made using country-specific methods in order to improve the quality of emission estimates.

A number of steps have been taken to limit the potential impacts of ammonia emissions. The European Parliament and Council’s Directive 2008/1/EC on Integrated Pollution Prevention and Control (IPPC) — until 2013 — requires industrial and agricultural activities with a high pollution potential to have a permit. This permit can only be issued if certain environmental conditions are met, so that the companies themselves bear responsibility for preventing and reducing any pollution they may cause. The Directive explicitly requires EU Member States to take measures to reduce ammonia emissions on livestock holdings that have at least 40 000 places for poultry, 2 000 places for production of pigs (over 30 kg) or 750 places for sows. In 2010 the IPPC directive was recasted and integrated into the Industrial Emissions Directive 0075/2010 together with 6 other EU directives regulating large industrial sites.

The Council’s Nitrates Directive 1991/676/EEC aims to protect water quality across Europe by preventing nitrates from agricultural sources polluting ground and surface waters and by promoting the use of good farming practices. The EU Member States agreed to national emissions ceiling (NEC) targets for 2010 under the European Parliament and Council’s Directive 2001/81/EC, with possible further emission reductions thereafter. The purpose of these national emission ceilings was to reduce the total emissions of the four pollutants responsible for acidification, eutrophication and ground-level ozone pollution (sulphur dioxide, nitrogen oxides, volatile organic compounds and ammonia). These targets were subsequently broadly incorporated into the parallel and international UNECE Convention on Long-Range Transboundary Air Pollutants (LRTAP) — the so-called Gothenburg Protocol; only the targets for the Czech Republic and Portugal were slightly less ambitious than under the NEC Directive.

There are two other key factors that have had an indirect impact on ammonia emissions from agriculture. The first is the EU’s Common agricultural policy: the decoupling of subsidies under the 2005 reform of the CAP has given an added impetus to the decline in livestock numbers (for cattle and sheep in particular) as farmers are no longer paid a subsidy for every breeding animal but rather a single farm payment, and; the transition to open markets upon accession led to sharp falls in animal prices and consequent declines in livestock farming in many of the Member States that joined the EU in 2004 or 2007. The second factor is the level of meat consumption in the EU and the change in composition of meat consumption across Europe’s households, which may in part be linked to economic factors (the rising price of meat) or to health issues (especially those linked to the consumption of ‘red’ meats).