This Statistics Explained article has been archived - for recent articles on Agriculture see here. 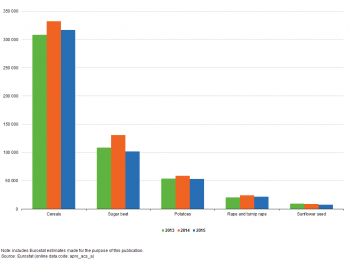 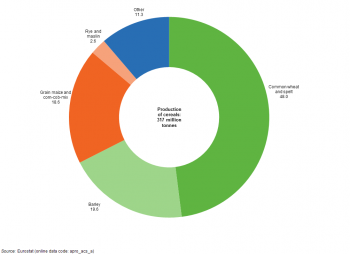 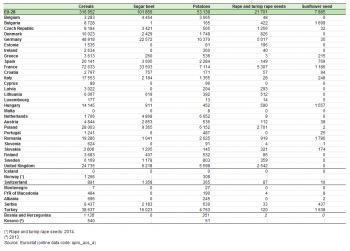 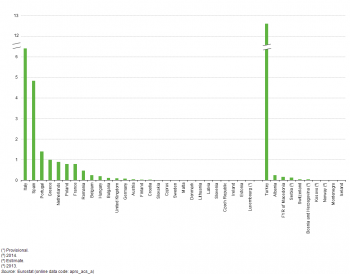 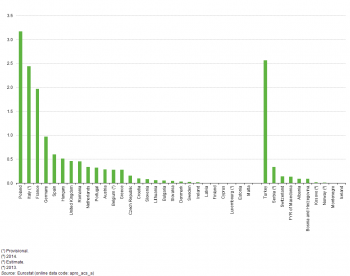 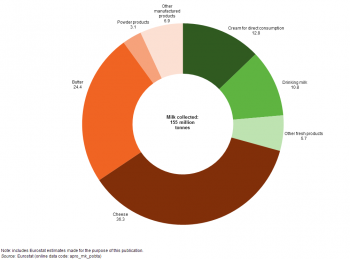 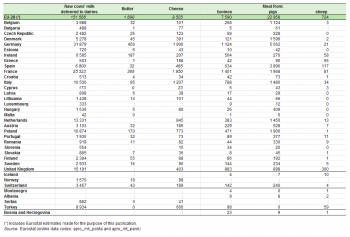 There is a wide diversity of natural environments, climates, economic conditions and farming practices across the European Union (EU). They are reflected in the broad array of food and drink products that are made available for human consumption and animal feed, as well as a range of inputs for non-food processes. Indeed, agricultural products contribute to the cultural identity of Europe’s people and regions.

Oilseeds production has followed an upward pattern in recent years mainly due to the increased use of oilseeds for bioenergy production. However, as for cereals and the two root crops shown in Figure 1, at 7.9 million tonnes the production of sunflower seeds was relatively low in 2015, 5.5 % below the average for the previous five years. By contrast, at 21.7 million tonnes the production of rape and turnip rape was 4.3 % higher than the five year average.

The production of potatoes was more widely spread across the EU Member States, with Germany recording the highest level of production (19.5 % of the EU-28 total), while France, the Netherlands, Poland and the United Kingdom each accounted for between 13.4 % and 10.5 %.

The most important fruits in terms of the level of production in the EU-28 were apples and oranges. The production of apples was common across most of the EU, although there was a particularly high level of production in several eastern EU Member States, notably in Poland. Indeed, Poland was the leading producer of apples in the EU-28 in 2015 and accounted for one quarter (25.0 %) of the EU-28’s output. Italy and France were the second and third largest producers of apples with shares of 19.2 % and 15.5 % respectively.

Dairy production has a diverse structure across the EU Member States, in terms of farm and dairy herd sizes, as well as milk yields. Figure 5 shows that 29.3 % of the whole milk that was utilised in the EU-28 in 2015 was used for fresh products, mainly as drinking milk or cream. The remaining 70.7 % was transformed into manufactured products; with 36.3 % of all whole milk converted into cheese, and 24.4 % into butter.

Table 2 summarises a range of different agricultural products from animals. The total collection of cows’ milk (in other words, cows’ milk delivered to dairies) in the EU-28 in 2015 amounted to an estimated 152 million tonnes. Germany and France recorded the highest quantities of cows’ milk collected in 2015 and they also accounted for the highest levels of production for butter and cheese; together they contributed between 38 % and 44 % of the EU-28’s total production for each of these three dairy products.

Annual statistics on the production of a wide range of crops are covered by Council Regulations and a Commission Delegated Regulation.

Meat production is based on the activity of slaughterhouses regarding meat fit for human consumption. The carcass weight is the weight of the slaughtered animal’s cold body and the precise definition varies according to the animal under consideration.

In October 2007, the Council adopted legislation to establish a single common market organisation for agricultural products (Regulation (EC) No 1234/2007). This was designed to reduce the volume of legislation in the farming sector, to improve legislative transparency, and to make agricultural policy more easily accessible. Between the start of 2008 and the start of 2009, the single common market organisation replaced 21 individual markets for a variety of different products such as fruit and vegetables, cereals, meats, eggs, dairy products, sugar or wine. Widespread reforms of the common agricultural policy (CAP) took place in 2003, 2008 and 2013. The December 2013 reforms comprised four Regulations, including Regulation (EU) No 1308/2013 which concerns measures linked to agricultural products.