This Statistics Explained article has been archived - for recent articles on agriculture see here. 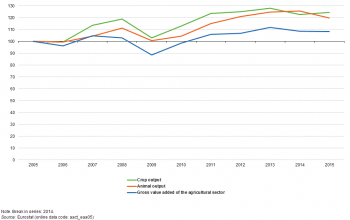 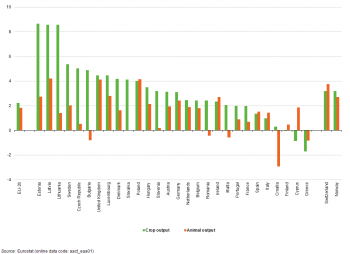 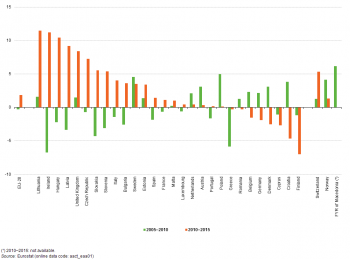 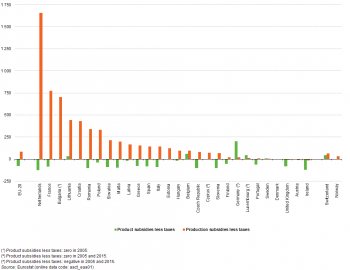 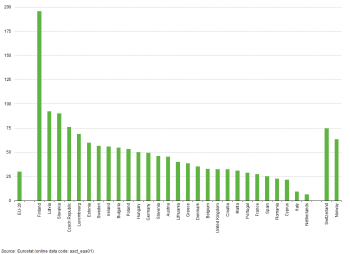 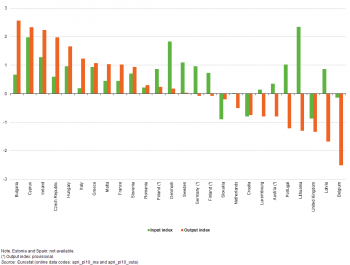 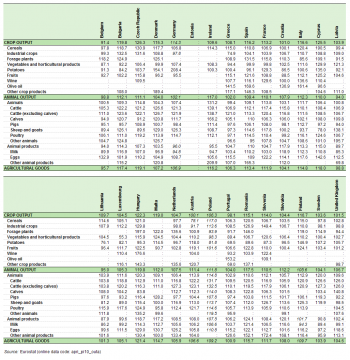 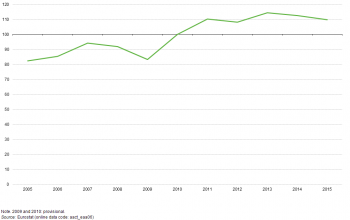 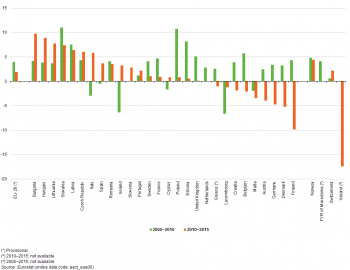 This article gives an overview of recent changes in agricultural output, gross value added and prices in the European Union (EU), and their effect on income from agricultural activity; the information presented is drawn from the economic accounts for agriculture (EAA).

One of the principal objectives of the common agricultural policy (CAP) is to provide farmers with a reasonable standard of living (while promoting more competitive and sustainable agriculture and encouraging vibrant rural areas). Although this concept is not defined explicitly within the CAP, a range of indicators including income development from farming activities may be used to determine the progress being made towards this objective.

The information presented in Figure 1 is in current price terms and at basic prices. It shows clearly a downturn in EU-28 agricultural output in 2009 (at the peak of the global financial and economic crisis) followed by an expansion through to 2012 or 2013 and then a generally downward pattern of developments until 2015.

Value added at basic prices — as presented in Figure 1 — includes the value of subsidies (less taxes) on products whereas value added at producer prices is the value before adding in any subsidies (less taxes) on products. For comparison, in 2015 the EU-28’s agricultural sector recorded value added at producer prices that was EUR 161.3 billion, 2.7 % lower than the valuation at basic prices. During the period from 2005 to 2015, average growth rates for crop output in producer prices stood at 2.9 % per annum, which was slightly higher than the change recorded for animal output (2.2 % per annum).

The majority of the EU Member States, 21 out of the 28, reported a higher rate of change for crop output than for animal output over the period under consideration (see Figure 2, which is shown for basic prices). The highest rates of change for crop output were recorded in the Baltic Member States, while the highest growth rates for animal output were recorded in Latvia, Poland and the United Kingdom. Romania, Malta, Bulgaria, Greece and Croatia were the only Member States to record a lower value of animal output in 2015 than in 2005, while there was no change in crop output in Finland and relatively small decreases in Cyprus and Greece.

Figure 3 shows the changes in gross value added at basic prices of the EU-28’s agricultural sector split between the periods 2005–2010 and 2010–2015 (expressed as average rates per annum). Comparing these two five-year periods, there was almost no change in value added developments in the EU-28’s agricultural sector between 2005 and 2010 (-0.3 % per annum), whereas growth averaged 1.9 % per annum during the second five-year period (2010–2015). Among the EU Member States there were contrasting patterns with 17 out of the 28 recording a higher average rate of change in 2010–2015 than during the period 2005–2010; 15 of the Member States reported a negative annual average rate of change in the first of these five-year periods and eight in the second, with Finland, Cyprus and Greece the only countries to record a negative rate in both periods.

Changes in the value of agricultural output comprise a volume and price component. One important strand of recent changes in agricultural policy has been to move away from price support mechanisms, so that prices more accurately reflect market forces and changes in supply and demand. During the period 2010–2015 (see Figure 6) there were considerable differences between the EU Member States in the development of deflated agricultural output prices; such deflated prices show the extent to which agricultural prices have changed compared with consumer prices. Deflated output prices rose in 14 of the 26 Member States for which data are available (output price data are not available for Estonia and Spain) between 2010 and 2015, the largest increases being recorded for Bulgaria (average growth of 2.6 % per annum), Cyprus (2.3 % per annum), Ireland (2.2 % per annum) and the Czech Republic (2.0 % per annum); these were the only Member States where growth reached or exceeded 2.0 % per annum. By contrast, reductions were posted in 12 of the EU Member States, the largest being in Belgium (-2.5 % per annum) and Latvia (-1.7 % per annum).

The development of deflated agricultural input prices during the period 2010–2015 showed a somewhat different picture, as prices rose in all but four of the 26 EU Member States for which data are available (input price data are not available for Estonia and Spain). The exceptions were recorded in Belgium, Croatia, the United Kingdom and Slovakia, where input prices fell (with respect to consumer prices) by no more than 0.9 % per annum; all four of these Member States also recorded a decline for their deflated output price indices too. At the other end of the ranking, deflated input prices rose, on average, by 1.0–2.0 % per annum in Germany, Hungary, Portugal, Sweden, Ireland, Denmark and Cyprus, while the highest deflated input price increase was recorded in Lithuania, averaging 2.3 % per annum.

Table 1 presents provisional output price indices (nominal, not deflated) for a range of agricultural goods for 2015; the reference year for the index is 2010 (= 100); note there are no data available for Estonia. When analysed for the main components — crop output and animal output — there was a wide range of price developments across the EU Member States during the period 2010–2015. While crop output prices increased overall by 22.3 % in Hungary, 25.5 % in Cyprus and by 26.3 % in the Czech Republic during this five-year timespan, prices fell by 1.9 % in Portugal and by 8.6 % in Belgium; these were the only EU Member States where crop output prices fell during the period 2010–2015.

A similar comparison for animal output shows the highest price increases were recorded in Hungary (an overall increase of 19.8 %), followed by Romania (17.5 %) and Ireland (17.0 %). Animal output prices fell in three of the EU Member States during the period 2010–2015, with prices falling at their most rapid pace (by at least 5.0 % overall) in Latvia and Lithuania, while prices fell in Belgium by a smaller margin (falling 1.2 % overall). The upward development of animal output prices between 2010 and 2015 was, at least in part, influenced by pace of rising prices for eggs and cattle. Some of the highest price increases for crop output were recorded for olive oil and wine.

Economic accounts for agriculture (EAA) provide an insight into:

These accounts comprise a production account, a generation of income account, an entrepreneurial income account and some elements of a capital account. For the production items, EU Member States transmit to Eurostat values at basic prices, as well as their components (values at producer prices, subsidies on products, and taxes on products). The data for the production account and for gross fixed capital formation are transmitted in both current prices and the prices of the previous year.

Agricultural income indicators are presented in the form of:

Significant reforms of the common agricultural policy (CAP) have taken place in recent years, most notably in 2003, 2008 and 2013, with the aim of making the agricultural sector more market-oriented. The 2003 reform introduced a new system of direct payments, known as the single payment scheme, under which aid was no longer linked to the level of production (decoupling); this single payment scheme aimed to guarantee farmers more stable incomes. Farmers could decide what to produce in the knowledge that they would receive the same amount of aid, allowing them to adjust production to suit demand. In 2008, further changes were made to the CAP, building on the reform package from 2003.

The Europe 2020 strategy offers a new perspective on economic, social, environmental, climate-related and technological challenges and future agricultural reform is likely to be made in relation to the goals of developing intelligent, sustainable and inclusive growth, while taking account of the wealth and diversity of the agricultural sector within the EU Member States. As part of this process, the European Commission launched a public debate on the future of the CAP during 2010. Its outcome, coupled with input from the European Council and Parliament led the European Commission to present a Communication in November 2010, titled ‘The CAP towards 2020: meeting the food, natural resources and territorial challenges of the future’ (COM(2010) 672 final).

In December 2013, this latest reform of the CAP was formally adopted by the European Parliament and the Council. Among the main elements of the CAP post-2013 are a fairer distribution of direct payments (with targeted support and convergence goals), revisions to public intervention and private storage aid, and continued support for rural development.