Data from May 2010, most recent data: Further Eurostat information, Database.

Results for agricultural income in the European Union (EU) are measured in terms of the trend in real income per annual work unit (AWU). From year to year there have been small decreases in labour input, but these have rarely been the main driving factor behind the short term changes in Indicator A. However, over a longer period, the development in agricultural labour input constitutes one of the major changes.

EU agricultural labour down by nearly 25% since 2000

Agricultural labour in the EU has decreased by 24.9% since 2000 which, in terms of AWU, represents a drop of 3.7 million from 14.9 million AWU in 2000 to 11.2 million AWU in EU-27 in 2009. Because many farmers and farm workers are only employed part-time in agriculture, the number of people actually working in agriculture is greater than the number of annual work units.

The rates of decrease in agricultural labour input in the individual countries range from 2.6% in Greece to 55% in Estonia, where labour input has more than halved in less than 10 years. Generally speaking, the decrease is lowest in the EU-15 countries, but also in Poland (−11.3%), which makes it an exception among the 12 new Member States. Portugal, on the other hand, is in the opposite situation: its decrease of 31.6% shows a trend similar to the average decrease in labour input for the 12 new Member States (−31.3%). 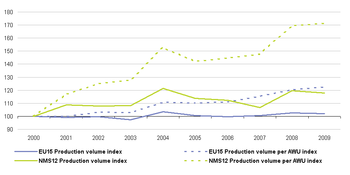 The volume of agricultural production in the EU has remained fairly stable since 2000 according to the indices compiled from the accounts data at constant agricultural prices. The figures show a 4% higher production volume in 2009 than in 2000. As the labour input over the same period decreased by 24.9%, the volume produced per annual work unit has improved significantly. The EU-15 and the 12 new Member States have shown different trends in terms of the volume of output, with a volume for EU-15 that is very stable and a volume for the 12 new Memeber States that is growing over time. For the 12 new Member States the volume has increased by 15% since 2000, based on the average of the indices for 2007-2009.

The differences between the two groups of countries become even clearer when one measures the development in volume per AWU. With this indicator, the EU-15 shows an increase of slightly less than 20% since 2000 - while the increase for the 12 new Member States is well over 60% since 2000 according to the average indices for 2007-09.

However, the level of output volume produced per annual work unit is still very different between the two groups of EU Member States. As an average for 2007-09 the output in constant agricultural prices (2005 prices) per AWU was 6.4 times higher in the EU-15 than in the 12 new Member States. Different agricultural products and somewhat lower prices in the 12 new Member States can explain only a small part of this huge difference in level.

Agricultural labour input has a significant impact on the main indicator (Indicator A) for the Economic accounts for agriculture, as the indicator monitors the trend in the real factor income per annual work unit. Figures are available on the Eurostat website. The figure 3 shows factor income in real values (2005 Euro) divided by the agricultural labour input on average for the years 2000-02 and 2007-09, respectively. The results 2000-02 range from over EUR 30 000 per AWU (Denmark, Switzerland and Netherlands) to slightly over EUR 1 000 per AWU (Latvia). The EU-15 countries plus Cyprus, Malta, Norway and Switzerland, but excluding Portugal, show results above the EU-27 average, while all the new Member States from Eastern and Central Europe are below the average, along with Portugal.

This overall increase in factor income per unit of labour input is to a large extent due to the decrease in labour income. If the labour input had remained the same, the EU-15 results would have decreased significantly and the result for 12 new Member States would have shown an increase slightly over 10%.

Estimated results for agricultural income and labour input are submitted by the Member States and EFTA countries. The implicit GDP-deflator is used for the compiling of the real values. Results from latest year are provisional.