Archive:Agricultural census in the United Kingdom

This article is part of a series of country-specific essays on the results of the European Union (EU) Farm structure survey (FSS) 2010. The FSS collects information on the structural characteristics of the agricultural holdings (land use, livestock and labour force) and is carried out by all European Union Member States every 10 years as an Agricultural census, with two or three additional, intermediate sample surveys carried out in-between. The present analysis of the farm structure includes a comparison with the FSS 2000.

In the United Kingdom, the FSS 2000 and the Agricultural census 2010 were carried out using different thresholds. To overcome this methodological issue and draft the present article, the 2000 values were filtered using the 2010 [1] thresholds. Accordingly, the 2000 figures mentioned throughout this article and presented in the tables differ from the ones presented in the Eurostat online database. Nonetheless, hyperlinks to the online database are also provided throughout the article. 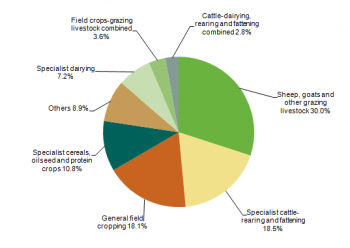 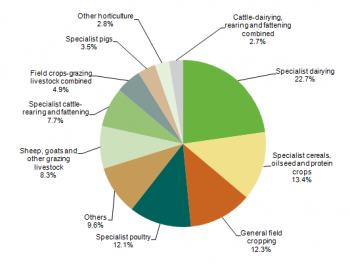 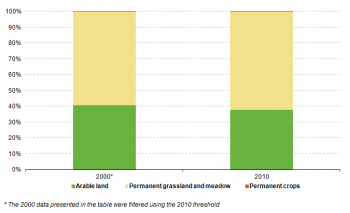 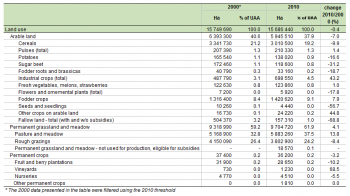 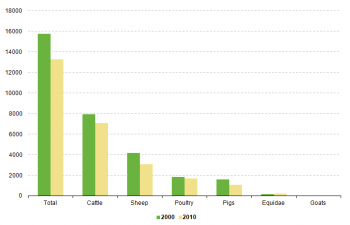 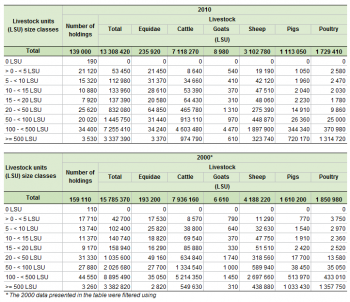 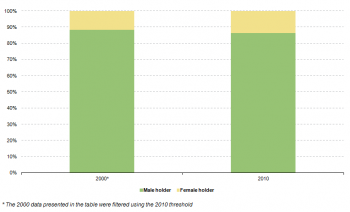 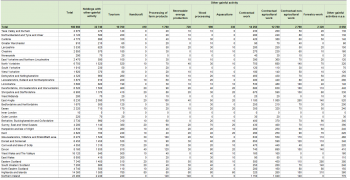 The utilised agricultural area (UAA) remained quite stable, as it only lost 63 250 hectares (-0.4 %) between the two reference years: it covered 64 % of the country’s territory in 2010, the second highest share reported within the EU-28 after the one recorded in Ireland (71 %).

As presented in Table 1, the reported average area per holding was quite high (84 ha per farm) in 2010 – it actually increased by about 5 hectares over the period under analysis, hence on average the British farms were found to be the second largest within the EU-28, after the Czech ones which recorded a much larger average area (152 ha per farm).

In the United Kingdom, the number of people regularly working in the agriculture sector decreased (-18.8 %) between 2000 and 2010, as about 97 000 people stopped working on the farms. Therefore, the agricultural labour force represented only 1.4 % of the British active population [2] in 2010, one of the lowest shares recorded among the EU Member States.

Although the farm animal population – expressed in livestock units (LSU) – decreased by 15.7 % (- 2.5 million LSU) between the two reference years, the United Kingdom reported a value (about 13.3 million LSU) which was found to be among the highest recorded within the EU-28 in 2010.

The economic size of the British agricultural holdings indicated the value of EUR 19 553 million in 2010, a figure which was found to be among the highest recorded within the EU-28. As shown in Table 2, the economic size of the British agricultural holdings – which is calculated by adding all the standard output (SO) per hectare of crop and per head of livestock of the farms – increased by 10.6 % (+ EUR 1 867 million) compared with 2007. This increase was not evenly distributed among all classes of farms, as it mostly concerned the biggest holdings – those with a standard output of at least EUR 250 000. In particular, agricultural holdings with an economic size ranging from EUR 250 000 to 499 999 recorded a 15.8 % increase (+ EUR 594 million), while farms with a SO of EUR 500 000 or more recorded the highest rise (+33.4%). Together, the two aforementioned classes of farms accounted for 62 % of the country’s SO in 2010; they accounted for 55 % in 2007.

If the number of holdings and the main type of farming are taken into account, holdings specialised in sheep, goats and other grazing livestock proved to be the most significant, as they accounted for 30 % in 2010. As shown in Figure 2, holdings dedicated to cattle-rearing and fattening shared further 18.5 %, which was very similar to the share recorded by farms dedicated to general field cropping (18.1 %). Holdings dedicated to cereals, oilseed and protein crops (10.8 %) were found to be just above the 10 % threshold.

If the economic size is taken into account, the ranking looks different, as holdings specialised in dairying recorded the highest share (22.7 %) over the total SO in 2010. Farms dedicated to cereals, oilseed and protein crops reported the second highest value (13.4 %), followed by holdings dedicated to general field cropping (12.3 %) and those dedicated to poultry (12.1 %).

The utilised agricultural area (UAA) is the total area used by the holding, regardless of the type of tenure or whether it is used as a part of common land. Generally, it is taken up by arable land, permanent grassland and meadow, permanent crops and kitchen gardens.

The land dedicated to permanent grassland and meadow covered by far the largest portion of agricultural area in 2010 (see Table 3). Pasture and meadow was the main component, as it accounted for 37.5 % of the British agricultural area in 2010: it actually gained 714 360 ha compared with 2000. The land dedicated to rough grazing experienced a different trend, having lost 347 190 ha in the 10 years under analysis, and indicated the value of 3.8 million hectares in 2010.

Statistics on livestock use two different units of measurement: the number of heads (number of animals) and the livestock units (LSU), the latter of which allows comparison between different types.

Cattle were found to be the most important livestock in the United Kingdom: they indicated the value of 7.1 million LSU and accounted for 53.5 % of the entire population of farm animals in 2010. Sheep were the second most important farm animals (23.3 %), although they reported a 26 % decrease compared with 2000; poultry was the only other livestock to report a double digit share (13 %), despite the fact that it decreased by 6.6 % over the period under analysis.

In the United Kingdom, the number of holdings with livestock decreased by 12.6 % between the two reference years (- 20 110 farms). Since the total population of farms decreased at a lower rate (-5.8 %), the ratio between holdings with farm animals and the total number of agricultural holdings dropped, from 80 % in 2000 to 74 % in 2010.

Although the percentage of female sole holder slightly increased between the two reference years – from 13 % in 2000 to 16 % in 2010 – the gender cleavage was still significant among the British farms in 2010.

As presented in Table 6, most of the British agricultural land (69.4 %) was found to be farmed by the people who owned it, whereas a minor share (30.6 %) was reported as farmed by the tenants. Due to methodological reasons, no land was recorded as being farmed in partnership by the landlord and the sharecropper under a written or oral share-farming contract in the United Kingdom.

There were 85 760 holdings farming over 10 million heads of cattle in the United Kingdom in 2010; from among the other European Member States, Lithuania (93 050) and Austria (71 940) reported a comparable number of farms with cattle.

As presented in Table 7, the majority of farms (72.0 %) hosted cattle in loose housing where there are manure storage facilities for solid dung and liquid manure (4 563 360 places). The second most common type of animal housing was found to be the one were cattle are tied to their places and are not allowed to move freely. They contain manure in the form of solid dung and liquid manure. This system of housing was recorded in 29 % of the holdings with cattle and it indicated the value of about 2.1 million places. When analysing the animal housing capacity, it must be noted that more than one type of housing could be recorded for a single holding.

In 2010, there were 32 740 holdings reporting an extra source of income in the United Kingdom. These farms, which recorded activities other than farm work, directly related to the holding and having an economic impact on the farm, represented 17.5 % of the British population of holdings in 2010.

In the United Kingdom, organic farming proved to be a marginal practice: it covered only 2.4 % of the country’s UAA and was employed by a minor share (1.8 %) of agricultural holdings.

In the United Kingdom agriculture is a devolved matter. Accordingly, the Scottish and the Welsh Governments, as well as the Northern Ireland assembly, have responsibility for their own agricultural policy and data provision. The United Kingdom Department for Environment, Food and Rural Affairs (DEFRA) is the central contact point and the data supplier, though the Welsh Government, the Department of Agriculture and Rural Development of Northern Ireland and the Scottish Government are responsible for the data collection within their own borders.

In 2010 a one-off survey was carried out together with the Agricultural census, the Survey on agricultural productions methods (SAPM). This survey collected data at regional level needed to establish agri-environmental indicators as indicated in COM final 508/2006 and to evaluate the greening of the Common agricultural policy.

In the United Kingdom, the SAPM was conducted as a sample survey using a stratified sample method which took into account the United Kingdom regions, the farm size and the farm type. The sampling design targeted about 10 % of farms within any given strata.

In compliance with Regulation (EC) No 1166/2008 of 19 November 2008, the target population included all the agricultural holdings with at least five hectares of UAA. Moreover, holdings falling below this threshold but complying with a set of different physical thresholds related to the hectares of certain types of crops or heads of cattle were also included in the target population.

In the United Kingdom, common land consists only of permanent grassland – exclusively used for rough grazing – and is mostly located in remote upland areas. Data on common land have never been included in the FSS dataset, as they cannot be assigned to individual holdings and are only estimated for domestic publication: it remains the case for 2010.

Information on the location of the farm was obtained through the County Parish Holding number, which is available in the farm register.

From FSS 2007 onwards, the standard output (SO), a new classification of the economic size of the holding, is used. The SO has replaced the standard gross margin (SGM) used before. Nonetheless, for comparability reasons, in FSS 2007 both classifications are available.

In the United Kingdom, the thresholds used for the FSS 2010 differ from the ones employed in the previous waves of the survey. Accordingly, to draft the present article and compare the FSS 2000 with the Agricultural census 2010, the 2000 dataset was filtered using the thresholds employed in 2010(see footnote 1 below). Therefore, the 2000 figures mentioned within this article and presented in the tables slightly differ from the ones presented in the Eurostat online database; nonetheless, hyperlinks to the online database were also provided throughout the article.

In 2000, the United Kingdom data were published at NUTS 1 level (11 regions), whereas in 2010 information was disclosed at NUTS 2 level (37 regions). Furthermore, United Kingdom experienced a boundary shift between Merseyside and Cheshire over the period under analysis. Due to these inconsistencies in the collection and publication of territorial data, the present analysis of the United Kingdom Agricultural census was conducted only at national level.