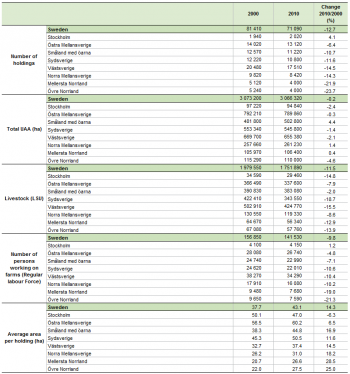 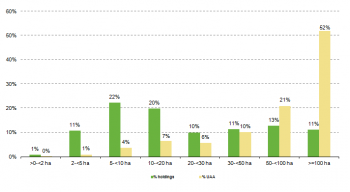 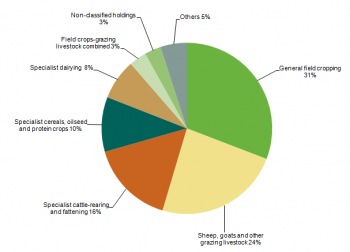 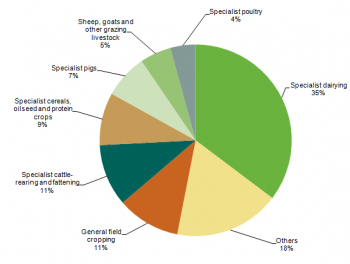 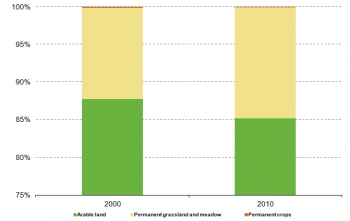 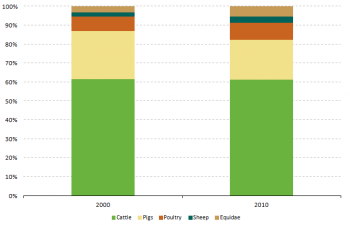 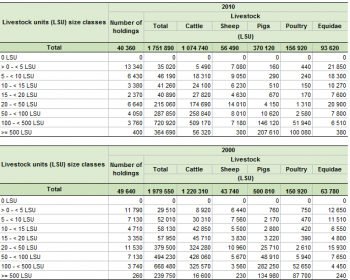 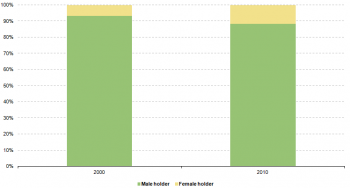 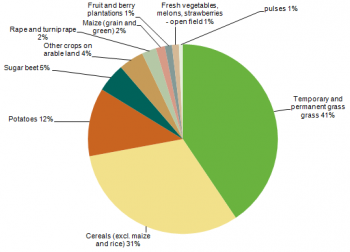 In 2010 there were 71 090 agricultural holdings in Sweden (see Table 1), the highest number among the Scandinavian countries. After the year 2000 the number of agricultural holdings decreased by 12.7 %, as it did in most of the European Member States. In absolute terms, more than 10 000 holdings closed down during the 2000-2010 decade.

The utilised agricultural area (UAA) represented 7 % of the Swedish territory in 2010, a share that was found to be the smallest within the EU-27, together with the value recorded in Finland. Furthermore, the UAA remained fairly stable compared with the 2000 data (-0.2 %). On the contrary, the average size of the holdings increased from 37.7 ha to 43.1 ha, so that in 2010 Sweden was ranked among the EU Member States with the highest average area per agricultural holding: among the Scandinavian countries only Denmark recorded a higher value. Far from being equally distributed over all the classes of farms, this increase in size was mostly recorded for the biggest class of holdings (+41 %), i.e. those with more than 100 hectares of UAA. When looking at the animal livestock expressed in livestock units (LSU), it can be observed that in 2010 1.7 million LSU were recorded in Sweden. This represents a decrease of 0.2 million LSU (-11.5 %) when compared to the 2000 data and the second highest value among the Scandinavian countries well behind the figure recorded for Denmark.

When comparing the 2000 data with the 2010 data, changes appear to vary significantly among the different regions of Sweden. The Östra Mellansverige region – which represented almost 26 % of the total UAA (789 860 ha) and 19 % of the agricultural holdings (13 120) of the whole country in 2010 – did not show any major transformations in terms of agricultural activity (see Table 2): despite the fact that the number of farms decreased by 6.4 %, the UAA remained fairly stable (-0.3 %). A similar trend was recorded in Västsverige, the second biggest region of the country in terms of UAA (655 380 ha): while the number of holdings dropped by 14.5 %, the UAA decreased marginally (-2.1 %), so that in 2010 that region still represented 21.4 % of the whole UAA of the country.

More generally, when comparing the 2000 data with the 2010 data in terms of LSU, all the regions displayed a fall in the number of livestock. If the Sydsverige territory showed the highest decrease (18.7%), large falls were also recorded for the regions Västsverige (-15.5 %) and Stockholm (-14.8 %).

Within the EU 27 context, agricultural holdings were found to be rather big in Sweden: in 2010 they recorded an average area per holding of 43 hectares. Furthermore, 17 000 farms (24 % of the total) proved to have 50 hectares or more of UAA; this group of holdings accounted for 73 % of the total UAA of the country (2.2 million of hectares). In terms of the number of holdings, the farms with 5 to 20 hectares were the most common in Sweden (42 %), though they represented only 10 % of the UAA of the country.

Utilised agricultural area (UAA) is the total area taken up by arable land, permanent grassland and meadow, permanent crops and kitchen gardens used by the holding, regardless of the type of tenure or of whether it is used as a part of common land.

In Sweden the UAA remained fairly stable, recording only a marginal fall (-0.2 %) after the year 2000, and indicating the value of 3.1 million hectares in 2010. Nonetheless, some remarkable changes were registered within the main categories of UAA within the 2000-2010 timeframe. According to the 2010 Agricultural census data, the share of the area occupied by arable land fell by 3.2 %, the area of permanent grassland and meadow largely widened (+21.1 %), the permanent crops decreased by 17.9 %, while the area of kitchen gardens was not surveyed as considered non significant in Sweden.

When comparing the 2010 data with the 2000 data, in terms of AWU, a fall in the labour force directly employed in the agricultural sector is observed (-23.4 %).

As in Sweden there is no land under shared farming – which is the agricultural area utilised in partnership by the landlord and the sharecropper under a written or oral share-farming contract, or it is an area utilised under other modes of tenure – the tenants work on the remaining 43 %. Within this context, the region of “Mellersta Norrland” was the only one where farming by tenant was more common than farming by owner.

In 2010 the irrigable area (the area which could be irrigated using the existent equipment and water normally available on the holding) was 164 230 ha in Sweden, corresponding to 5.3 % of the total UAA. The land that was actually irrigated area was 63 250 ha (only 2 % of the Swedish UAA). The irrigated area increased by 18 % since 2003 (the date were it is first available).

For the first time in 2010 the irrigated area was collected by type of crop, in Sweden the temporary and permanent grass, and the cereals (excluding maize and rice) were the most irrigated crops with 41 % and 31 % respectively of the irrigated area.

In terms of the volume of water, 111 millions of cubic metres of water were used to irrigate the UUA in Sweden in 2010. As kitchen gardens are non-significant, they were not surveyed in Sweden, so that the volume of water does not include this category of land. The estimated value takes into account several factors and was calculated for the first time for 2010 FSS. Clearly, the amount of water used in agriculture strongly depends on the territory and its peculiarities. In Sweden, the region of Mellersta Norrland was characterized by the largest estimation of water used for irrigation in 2010 (1 124 cubic metres per hectare of land irrigated in the previous 12 months) followed by the capital region of Stockholm (1 077 cubic metres per hectare), whereas Småland med oarna is the one which recorded the smallest estimation (853 cubic metres per hectare of land irrigated in the previous 12 month).

According to the 2010 data, there were 21 590 holdings raising 1 536 660 heads of cattle in Sweden. In the first edition of the SAPM 1 250 710 places for cattle were surveyed in the Swedish farms, covering 81 % of the total heads of cattle. Table 9 lists the number of places for cattle by type of housing. More than half of the places (52.2 %) are in stables were animals are allowed to move freely (loose housing). The most common type of housing is the loose housing with solid dung and liquid manure (571 450 places – 37.2 %).

In Sweden, the most common other gainful activity was contractual work, which involved 13 800 holdings according to FSS 2010 data. These holdings were mostly concentrated in the regions of Västsverige (3 310) and Ostra Mellansverige (3 100). Contractual work involves work using the equipment of the holding inside or outside the agricultural sector (for example clearing snow, haulage work, landscape maintenance).

The Farm Structure Survey 2010 was carried out as a census in accordance with the EU Regulation 1166/2008. Around 76 800 holdings received an envelope containing information and the survey questionnaire around the 28th of May 2010. In Sweden, the Agricultural census 2010 was carried out combining both national and EU obligations and was implemented in its full form (organization, data collection, data editing, etc.) by the Statistic Division of the Swedish Board of Agriculture.

In Sweden the SAPM was conducted as a sample survey. Accordingly, among the population covered by the Agricultural census, about 8 700 holdings received also the questionnaires on the SAPM and the OGA.

The organization of the census started in September 2009, while the main activities started in mid-October 2009 with the construction of the questionnaires. The data collection and processing began in the middle of June 2010 and ended the 10th of October 2010 with a response rate of 97 %.

The reference date was set to the 10th of June 2010. For the characteristics within the farm labour force, production methods and irrigation sectors, the reference period was June 2009-May 2010.

For the FSS 2010 a combination of the old national thresholds and the new EU thresholds was introduced. This combination was a consequence of the need to prevent discontinuity in national time series. Thus, the target population for Agricultural census 2010 consisted of all agricultural holdings in Sweden which met at least one of the following criteria in June 2010:

For most of the agricultural holdings, the location was extracted from the IACS register – a record developed on the basis of the Council Regulation (EC) no 1782/2003, which contains information from the applications for the single farm payments.

In those cases where this information was not available within the IACS, the location of the holding was extracted from the co-ordinates of the Central Cattle Register (about 500-600 holdings). For another 2000- 3000 holdings which did not apply for subsidies in 2010 (mainly small farmers), the address of the holder was used for obtaining the location.

Since the FSS 2007, the standard output (SO), a new classification of the economic size of the holding, has been implemented. The SO has replaced the Standard gross margin (SGM) used before. Nonetheless, for comparability reasons, in FSS 2007 both classifications are available.

The volume of water used for irrigation was estimated based on a methodology developed especially for this purpose by the Statistics Sweden institute in 2008.

The main source of information for calculating the volume of water used for irrigation were the questions on irrigated area within the different kinds of land in the SAPM. The water volumes were then estimated for each holding with irrigation equipment by using water need coefficients based on crop and geography. The coefficients were developed by the Swedish University of Agricultural Sciences. The water used for irrigating covered areas (kitchen gardens and green houses) was excluded from these calculations.

Comparison with the previous FSS

The comparability with data from surveys before the year 2005, especially for the number of holdings and areas with temporary grass, is somehow limited. This is because of the implementation of the CAP reform from 2005 and the change from area-based subsidies and animal subsidies to single farm payments. Between 2005 and 2007 the data comparability is good. Between 2007 and 2010 the new thresholds for 2010 cause some difficulties in terms of comparability.

As agriculture has been modernised and the importance of industry and services within the economy has increased, so agriculture has become much less important as a source of jobs. Consequently, increasing emphasis is placed on the role farmers can play in rural development, including forestry, biodiversity and the diversification of the rural economy, in order to create alternative jobs and environmental protection in rural areas.