In Slovakia, the FSS 2000 and the Agricultural census 2010 were carried out using different thresholds[1]. To overcome this methodological issue and draft the present article, the 2000 values were filtered using the 2010 thresholds. Accordingly, the 2000 figures mentioned throughout this article and presented in the tables, or available through hyperlinks, differ from those in the Eurostat online database. Nonetheless, hyperlinks to the online database are also provided throughout the article. 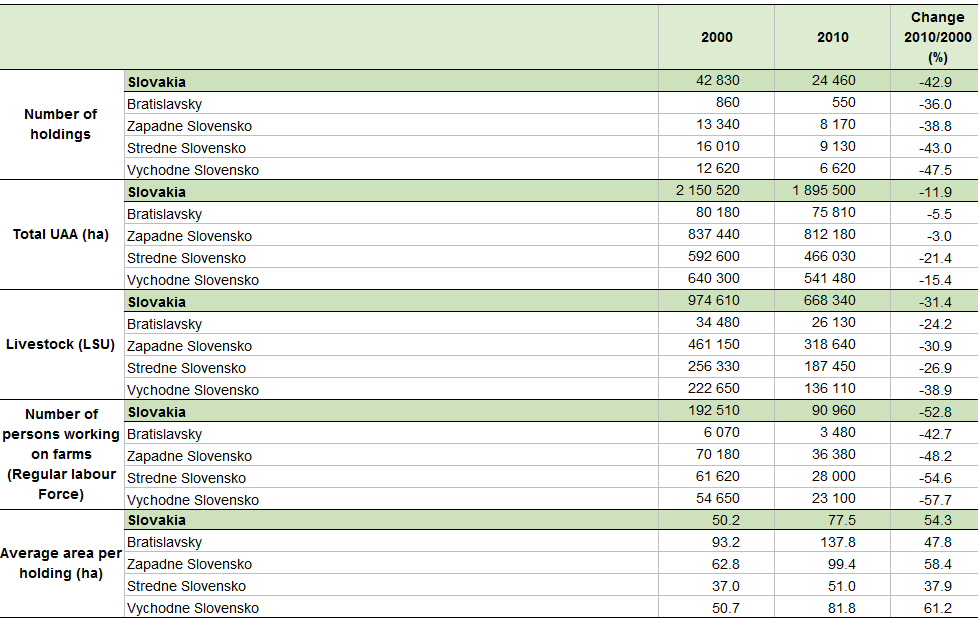 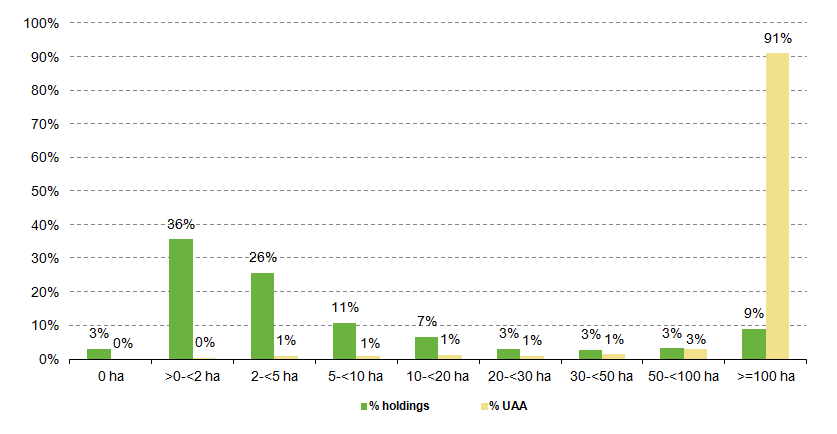 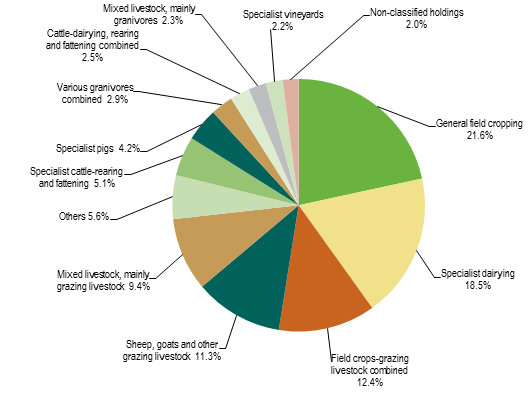 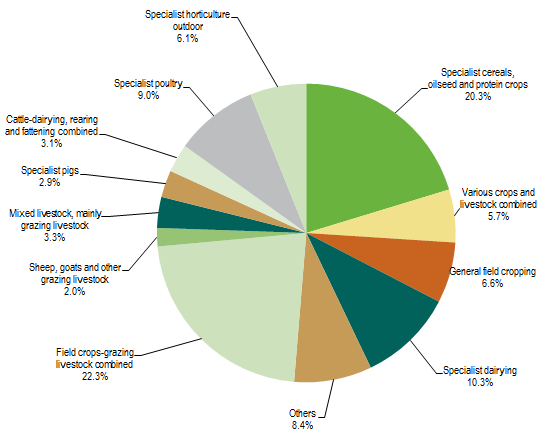 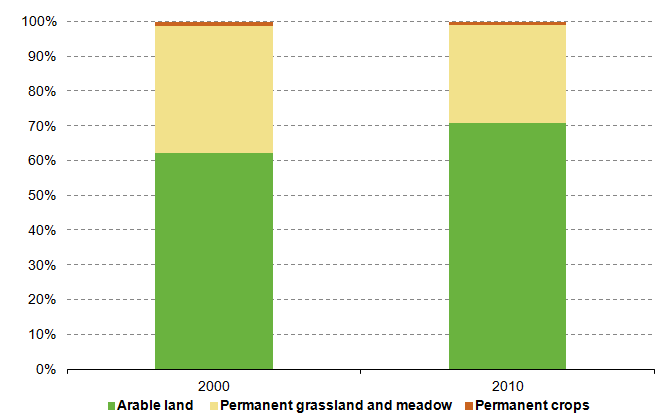 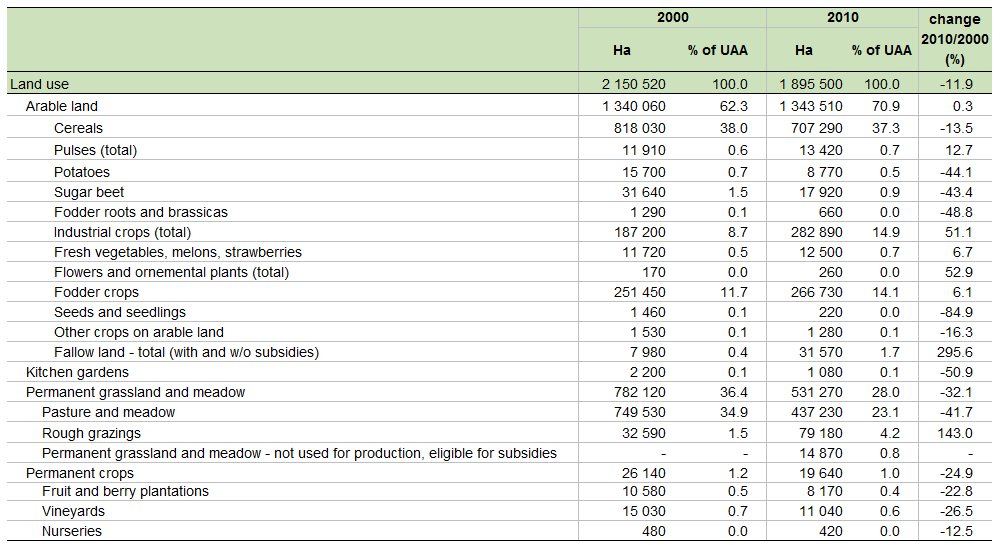 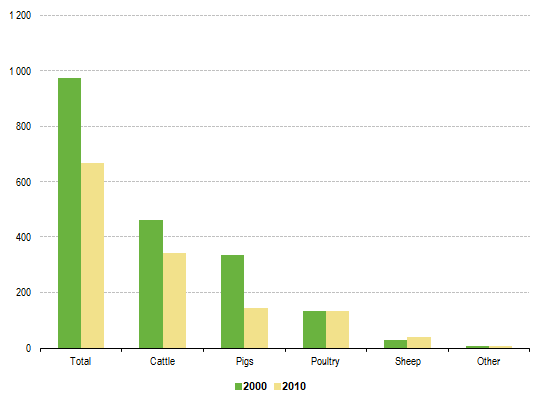 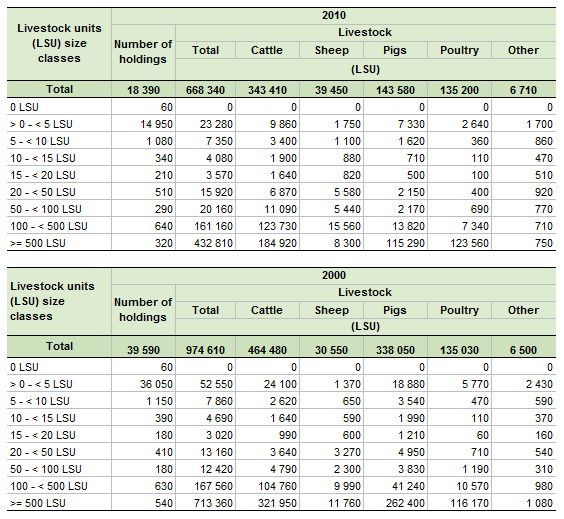 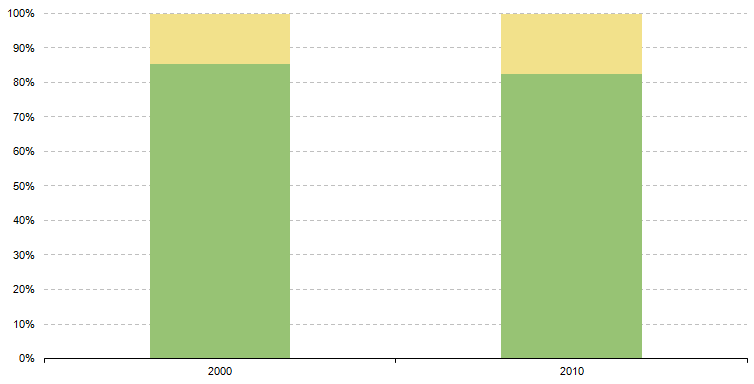 The utilised agricultural area (UAA) also decreased between the two reference years, although at a lower rate (-12 %). Accordingly, there were 1.9 million hectares of agricultural land in 2010, covering about 39 % of Slovakia's territory, which was 255 020 ha less than in 2000.

In Slovakia, a fairly limited number of holdings covered a large agricultural area in 2010, a characteristic which was shared by the Czech Republic. As a result, the average area per holding in Slovakia (77.5 hectares per farm) was the third highest among EU Member States.

The number of people regularly working in the agriculture sector dropped by about 53 % (see Table 1), as about 101 600 people stopped working on farms over the period under analysis. As a result, the agricultural labour force represented only 3.4 % of the Slovak active population[2] in 2010.

Table 2 presents the key indicators by NUTS 2 regions, providing an insight into the local characteristics of Slovak agriculture. It reveals two major patterns: the significance of the territory of Western Slovakia (Zapadne Slovensko), which recorded the highest values for almost every indicator analysed, and the marginal importance of the Bratislava region (Bratislavsky), which reported the lowest figures.

In terms of the number of holdings, the region of Central Slovakia (Stredne Slovensko) registered the highest share (37 %), with 9 130 farms reported within its borders. Zapadne Slovensko recorded the second highest value (8 170), corresponding to one third of the entire population of farms, while the metropolitan region of Bratislava accounted for only 2.2 % (550 farms).

In terms of the agricultural labour force, the region of Zapadne Slovensko was by far the most significant, with 40 % of those regularly working on farms recorded within its territory. Stredne Slovensko also registered a notable share (31 %), while the share of the capital region of Bratislava was marginal (4 %).

The capital region of Bratislava recorded a value about twice as large as the national average for the average area of farms – 137.8 hectares per farm – confirming its peculiarity within the structure of Slovak agriculture

This phenomenon was also observed in the Czech Republic, although in Slovakia it was more prominent. This distribution of land, with many small farms sharing a low percentage of agricultural land and a few large holdings farming the vast majority of the UAA, explains the very high average area per holding registered in Slovakia in 2010.

From 2000 to 2010 the average area per farm in Slovakia changed from 50.2 ha to 77.5 ha. This shows the reinforcement of the concentration of agricultural land in terms of management, which in part is due to the reduction in the number of holdings.

As shown in Table 3, the economic size of Slovak agricultural holdings was EUR 1 731 million; among the other EU Member States, Bulgaria (EUR 2 537 million) and Lithuania (EUR 1 526) recorded similar values, while the Czech Republic reported a much higher figure (EUR 3 852 million). The economic size of Slovak agriculture – calculated by adding all the standard output (SO) per hectare of crop and per head of livestock of the farms – increased by 38 % between the two reference years, a rise which is mainly attributable to the largest class of farms, whose SO grew by 52.2 % (+ EUR 456 million) over the inter-census decade.

Among the Slovak regions, Zapadne Slovensko was the most important, accounting for more than half of the country’s SO (56 %) in 2010. The regions of Stredne Slovensko (18 %) and Vychodne Slovensko (17 %) recorded very similar values, while the capital region of Bratislava acconted for only 8 %.

In terms of economic size, the ranking is different and indicates the existence of three main types of production, which together accounted for 53 % of the total SO in 2010: agricultural holdings dedicated to field crops and grazing livestock combined (22 %), farms specialised in cereals, oilseed and protein crops (20 %) and holdings dedicated to dairying (10 %).

The utilised agricultural area (UAA) is the total area used by the holding, regardless of the type of tenure or whether it is used as a part of common land. Generally, it is taken up by arable land, permanent grassland and meadow, permanent crops and kitchen gardens.

In Slovakia, the agricultural area consists essentially of arable land and permanent grassland and meadows, which together accounted for 99 % of the country’s UAA in 2010 – the same share as in 2000. However, the area dedicated to arable land gained 3 450 hectares, while permanent grassland lost 250 850 ha over the inter-census period.

In Slovakia, arable land consists mainly of cereals, industrial crops and fodder crops. Cereals were the main component, covering 707 290 hectares and accounting for 37.3 % of agricultural land in 2010 – although their area fell by 110 740 hectares between the two reference years. As shown in Table 4, industrial crops (282 890 ha) and fodder crops (266 730 ha) recorded very similar values and both registered gains compared with2000: +95 690 hectares and +15 280 hectares respectively.

The area of permanent grassland and meadow fell over the period under analysis from a share of 36.4 % to 28 %. Among its components, the area dedicated to pasture and meadow lost about 312 300 hectares, while rough grazing gained 46 590 hectares.

Statistics on livestock use two different units of measurement: the number of head (number of animals) and livestock units (LSU), the latter of which allows comparison between different types of livestock.

Among the Slovak regions, Zapadne Slovensko hosted the highest number of cattle (139 620 LSU) and accounted for 41 % of the entire population of farm animals. As regards pigs and poultry, the region of Stredne Slovensko recorded the highest values, with 55.2 % of pigs and 46.3 % of poultry recorded within its borders in 2010.

In contrast to the majority of EU Member States, Slovak agricultural land is generally (88.1 %) farmed by tenants (see Table 7); only a small share (11.9 %) was actually found to be farmed by landlords in 2010. Furthermore, there is no agricultural land utilised in partnership by the landlord and the sharecropper under a written or oral share-farming contract in Slovakia.

In 2010, Slovakia was among the EU Member States with the lowest number of farms with cattle with 9 310 holdings farming 460 920 head of cattle. Nonetheless, the number of places (484 390) slightly exceeded the number of head of cattle in Slovakia, explaining why the related percentage was found to be more than 100 (see Table 8).

As shown in Table 9, there were 1 450 holdings with other gainful activities in Slovakia, among the lowest recorded within the EU-28 in 2010. Accounting for about 6 % of the total population of holdings, these farms recorded activities other than farm work, directly related to the holding and having an economic impact on the farm.

The Agricultural Census 2010 was the first to be carried out in Slovakia after the country’s accession to the EU in May 2004. However, the previous exhaustive Farm Structure Survey – conducted in 2000 – was already fully harmonized with EU regulations, thus comparison between the two waves is possible. The responsible body was the Statistical Office of the Slovak Republic, which collected information through its regional offices.

In Slovakia, the SAPM was conducted as an exhaustive survey using the same thresholds applied for the Agricultural census 2010. Accordingly, the smallest holdings, which all together contributed less than 2 % of the total UAA and fewer than 2 % of the total number of livestock, were not included in the target population.

Information was collected with reference to the 1st November 2009 – 31th October 2010 timeframe. In particular, data on livestock refer to the 31st October 2010, while information on rural development, landscape features and irrigated area was collected with reference to the three years prior to the survey (2008, 2009 and 2010).

In compliance with EC Regulation 1166/2008 of 19 November 2008, the target population included all agricultural holdings with at least one hectare of UAA. Moreover, holdings falling below this threshold but complying with a set of different physical thresholds (related to the areas of certain types of crops or head of livestock) were also included in the target population of both surveys. The thresholds for FSS 2010 were changed from the previous threshold of 0.5 ha of UAA to 1 ha of UAA. With this new threshold the survey still covered 98% of the UAA and 98% of the livestock in Slovakia. The data from FSS 2010 and previous years is not comparable with previous editions of the survey when it comes to the variables related to the number of holdings and to the characteristics linked to the labour force and the holder. In this article, data from previous surveys was recalculated using the same threshold criteria as those used in the FSS 2010.

In Slovakia common land is non-existent.

Information on the location of the farm was provided by the farmers and refers to the place where the main part of the production takes place. Once the data were collected, they were verified on the cadastral territory of the municipality and rounded using a 5 by 5’ grid for confidentiality reasons.

From FSS 2007 onwards, the standard output (SO), a new classification of the economic size of the holding, is used. The SO has replaced the standard gross margin (SGM) used before. Nonetheless, for comparability reasons, in FSS 2007 both classifications are available.

In 2000, 2003, 2005 and 2007, Slovakia conducted the Farm Structure Survey using thresholds lower than those employed for the Agricultural census 2010. In order to draft the present article and compare the FSS 2000 with the Agricultural census 2010, the 2000 dataset was filtered using the thresholds employed in 2010. Therefore, the 2000 figures mentioned within this article and presented in the tables or available through hyperlinks differ from those in the Eurostat online database. Nonetheless, hyperlinks to the online database are also provided throughout the article.