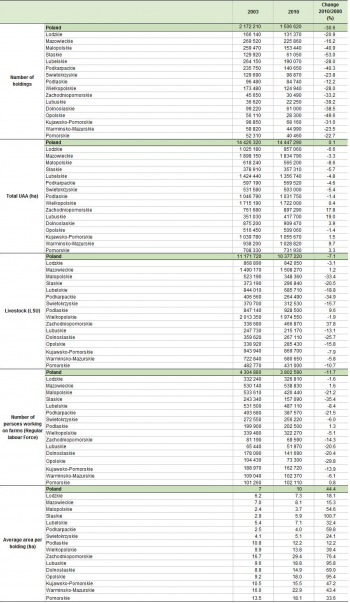 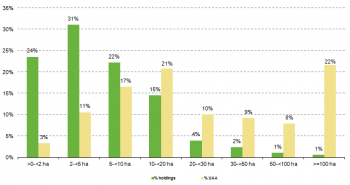 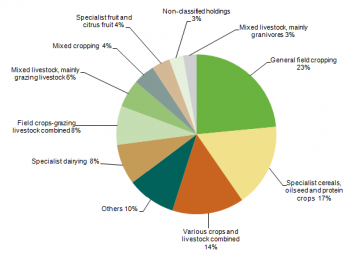 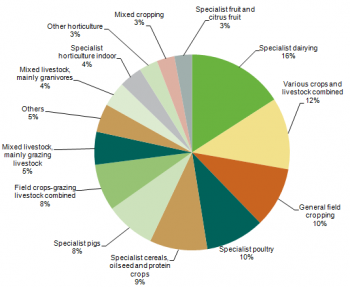 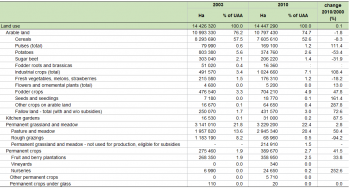 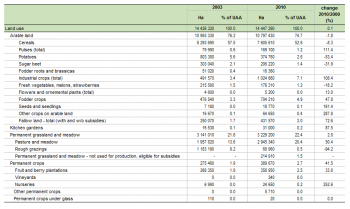 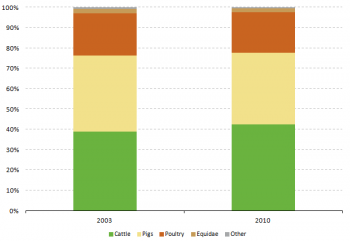 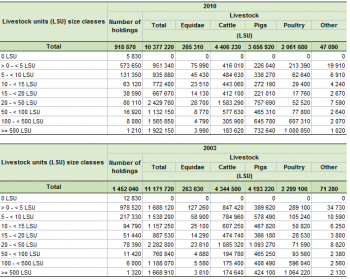 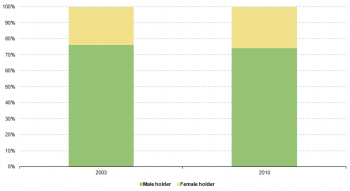 Within the EU-27, Poland is among the Member States with the highest number of agricultural holdings, with more than 1.5 million according to the Agricultural census 2010 (see Table 1). In 2003 this figure was even higher at over 2 million farms, however in the intervening years roughly one out of three agricultural holdings closed down.

The utilised agricultural area (UAA) remained quite stable over the same timeframe – 14.4 million hectares corresponding to 46 % of the whole country – suggesting that small holdings were taken over by bigger ones. This tendency, widespread in the EU, is confirmed by the growth in the average size of holdings, which rose from 6.6 ha in 2003 to 9.6 ha in 2010 (+44 %).

Within the period of this analysis, the number of persons regularly working in the agricultural sector dropped by 12 %, further confirming the above mentioned trend: over 4.3 million people worked in agriculture in 2003, while in 2010 this figure dropped to about 3.8 million. Despite the decline, this represented 22 % of the active population[1]of Poland in 2010, one of the highest shares within the EU-27.

Comparing the FSS 2010 data with the FSS 2003 data, a fall (-7 %) is also observed in the population of livestock expressed in livestock units (LSU), which decreased from over 11.2 million LSU in 2003 to 10.4 million in 2010. Nevertheless, Poland remained among the Member States with the highest numbers of LSU within the EU-27.

The regional data in Table 2 shows the local characteristics of Polish agriculture. Looking at the number of holdings, three regions stood out with double-digit shares of the total number of holdings in 2010: Mazowieckie (15 %), Lubelskie (13 %) and Malopolskie (10 %). In 2003 these three regions had also recorded values higher than 10 %, together with the region of Podkarpackie. The Podkarpackie region, however, recorded one of the highest decreases (-40 %) over the period, dropping below 10 % by 2010. Although Mazowieckie, Lubelskie and Malopolskie maintained their numbers above 10 %, they also recorded considerable drops in the number of holdings.

According to FSS 2010 data, the Mazowieckie region recorded the largest share of UAA (13 %), corresponding to 1.8 million hectares; a decrease of 3 % compared with FSS 2003 data (see Table 2). In terms of UAA, the second most important region was the north-eastern territory of Wielkopolskie, with 1.7 million hectares of UAA (12 %) in 2010, the same as in 2003. In addition, another four regions registered more than one million hectares of UAA: Lubelskie (1.4 million ha), Kujawsko-Pomorskie (1.05 million ha), Podlaskie (1.03 million ha) and Warminsko-Mazurskie (1.03 million ha); the latter region recorded a noticeable increase over the 2003-2010 time period (+10 %).

According to the latest structural data on agriculture, there were 538 830 persons regularly working on farms in Mazowieckie: a share of 14 % of the total number of persons working in this sector in Poland and a 1.6 % rise compared with the FSS 2003. The second highest figure was recorded in Lubelskie, where 487 110 persons were regularly employed in agriculture in 2010, corresponding to a share of 13 % (-8 % in comparison with 2003). Other notable values were recorded in Malopolskie (420 440) and Podkarpackie (387 570), both of which registered among the highest decreases (both -21 %) over the 2003-2010 timeframe.

In 2010, the economic size of all Polish agricultural holdings was EUR 18 987 million (see Table 3). This value, which is calculated by adding all the standard output (SO) per hectare of crop and per head of livestock of the farms, is one of the highest recorded within the EU-27. Compared with the 2007 FSS value (17 035 million), it increased by 11.5%, due to holdings with an average monetary value of EUR 15 000 or more. In particular, the highest increase was recorded for the largest class of holdings (+50 %) – those with EUR 500 000 or more of SO. in contrast, holdings with less than EUR 1 000 recorded the sharpest fall (-45 %).

Analysing holdings by the main type of farming, three major types can be identified in the Agricultural census 2010. Almost one out of four Polish agricultural holdings (23 %) were specialised in general field cropping; a further 17 % were specialised in cereals, oilseed and protein crops, while 14 % produced various crops and livestock combined. All other types of production recorded shares lower 10 %, falling within the aggregate category ‘other’.

The categories appeared less significant in terms of economic size, indicating the absence of a dominant production. Four categories recorded double-digit shares, although none accounted for even one fifth of the total standard output of the country. The highest share of the total SO of Polish agricultural holdings was produced by farms specialised in dairy farming (16 %), followed by those specialised in various crops and livestock combined (12 %), while agricultural holdings specialised in general field cropping and those focusing on poultry accounted for 10 % each.

The utilised agricultural area (UAA) is the total area used by the holding, regardless of the type of tenure or whether it is used as a part of common land; it consists of arable land, permanent grassland and meadow, permanent crops and kitchen gardens. In Poland, the UAA as well as the share of its main components – arable land and permanent grassland and meadows – remained fairly stable over the 2003-2010 period.

In Poland, arable land is essentially taken up by cereals, which in 2010 occupied 70 % of arable land, corresponding to 53 % of the total UAA. As shown in Table 4, this was a decrease of 8 % compared with the FSS 2003 figure.

Between 2000 and 2010, the area of permanent grassland remained fairly stable in Poland, increasing only by about 90 000 hectares (+3 %). Nevertheless, its composition changed over the years, as land dedicated to pasture and meadow grew by 50 %, reaching about 3 million hectares compared with roughly 2 million hectares in 2003. In contrast, the area of rough grazing dropped sharply, from over one million ha in 2003 to less than 70 000 ha in 2003. In addition, more than 200 000 hectares were not used for production but were eligible for subsidies in Poland in 2010 – usually this area is used for maintaining land in good agricultural and environmental conditions (GAEC).

Statistics on livestock use two different units of measurement: the number of head (number of animals) and livestock units (LSU), the latter allowing comparison between different types of livestock.

In 2010, more than 10 million LSU were recorded in Poland (see Table 5), one of the highest values within the EU-27. In relative terms, there were 0.38 LSU per inhabitant, the same as in 2003, as both the number of inhabitants and the population of livestock decreased over this timeframe.

The share of holdings with livestock in the total number of farms dropped over the years: from 67 % in 2003 to 61 % in 2010. The numbers of agricultural holdings and farms with livestock both decreased, although more rapidly for the latter. In particular, the number of farms with less than 20 LSU decreased, while holdings with 20 or more of LSU increased, suggesting that smaller farms were taken over by larger ones.

According to FSS 2010 data, Wielkopolskie was the region hosting the highest number of livestock: about 2 million LSU or 19 % of the whole population of livestock. In particular, this region accounted for 26 % of the total population of pigs.

As shown in Table 6, 3.8 million persons worked on agricultural holdings in Poland. Although this was one of the highest values recorded within the EU-27, it was down by 12 % compared with 2003, when more than 4 million persons worked in the agricultural sector. If the direct labour force is taken into account, in annual work unit (AWU), Poland recorded the highest value among the then 27 EU Member States: 1.9 million AWU in 2010, -13.4 % compared with 2003.

As in most of the northern Member States of the EU, irrigation is also of minor importance in Poland. Indeed, the irrigable area covered only 0.6 % of the Polish UAA (85 200 ha) and the irrigated area accounted for an even smaller percentage (0.3 %) of the total UAA in 2010.

Among the then 27 EU Member States, Poland had one of the highest numbers of holdings with cattle. According to the Agricultural census 2010, there were 514 120 such holdings raising 5.7 million head of cattle and providing a total of 7.1 million places. Thus, in Poland the number of places exceeded the number of head of cattle in 2010, which explains why the percentage is higher than 100.

The most common type of animal housing was that where animals are in a stanchion tied stable with solid dung and manure: 4.2 million places, corresponding to 73.2 % of the total head of cattle in Poland.

A large number of places (1.7 million) was recorded under the ‘other’ (non-specified) category. Accounting for 30 % of head of cattle, these places represented the second most important category, followed by loose housing with solid dung and liquid manure: 976 370 places allocated across 71 450 holdings, accounting for 17 % of head of cattle.

According to the data of the Agricultural census 2010, there were 49 680 holdings with other gainful activities in Poland. Although these farms represent only 3.3 % of the total number of holdings, this places Poland among the EU Member States with the highest population of farms with other gainful activities – activities other than farm work, directly related to the holding and having an economic impact on the holding.

In 2010, the Malopolskie and Mazowieckie regions recorded the highest number of holdings with other gainful activities: 6 560 and 5 980 holdings respectively. The most common activity other than agriculture was tourism (8 220 holdings).

The geographical location of agricultural holdings was obtained by matching the address features from the census list with the records from the statistical address database.

From FSS 2007 onward, the standard output (SO), a new classification of the economic size of the holding, is used. The SO has replaced the standard gross margin (SGM) used before. Nonetheless, for comparability reasons, in FSS 2007 both classifications are available.

This characteristic was calculated for the first time in 2010 within the context of the SAPM. In Poland, the volume of irrigation water did not take into account the water used for kitchen gardens and crops under cover.

In the second half of May and the beginning of June 2010, Poland experienced one of the largest floods in its history, which particularly affected the southern regions. This caused extensive damage to permanent grassland, resulted in a loss of agricultural production, and it increased the hectares of land not intended for agricultural production. Although some of these effects could be temporary, they should be taken into consideration when analysing the Agricultural census 2010 data.

European Commission Rural development policy aims to improve competitiveness in agriculture and forestry, the environment and the countryside as well as the quality of life in rural areas and to encourage the diversification of rural economies.