This article is part of a series of country-specific essays on the results of the European Union (EU) Farm structure survey (FSS) 2010. The FSS collects information on the structural characteristics of agricultural holdings (land use, livestock and labour force) and is carried out by all European Union Member States every 10 years as an Agricultural census, with two or three additional, intermediate sample surveys carried out in-between. The present analysis of the farm structure includes a comparison with the FSS 2000.

In Luxembourg, the FSS 2000 and the Agricultural census 2010 were carried out using different thresholds[1]. To overcome this methodological issue for the present article, the 2000 values were filtered using the 2010 thresholds. Accordingly, the 2000 figures mentioned throughout this article and presented in the tables, or available through hyperlinks, differ slightly from those presented in the Eurostat online database. Nonetheless, hyperlinks to the online database are also provided throughout the article. 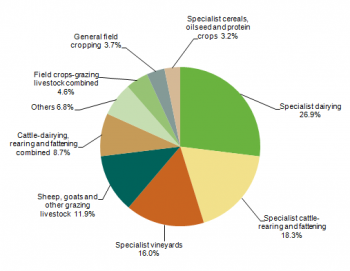 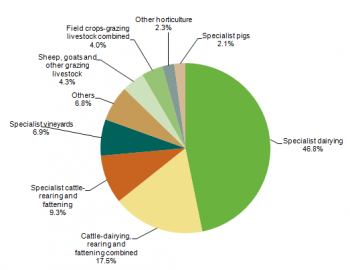 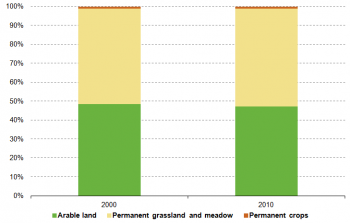 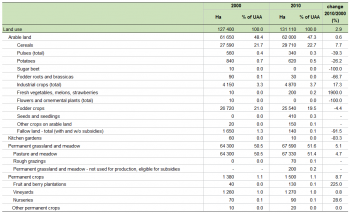 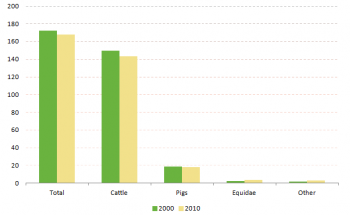 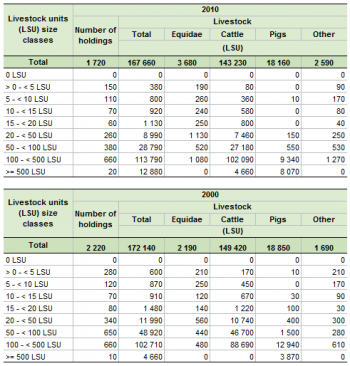 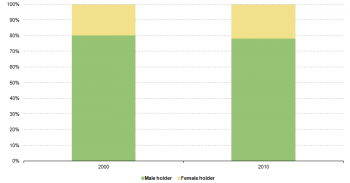 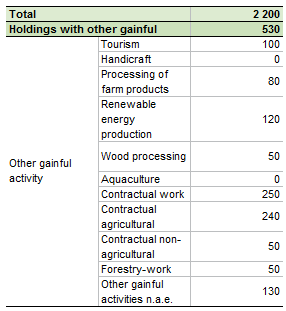 As a result of the number of holdings decreasing and agricultural land area increasing, the average holding size increased from 46.5 hectares per farm in 2000 to 59.6 in 2010. Compared with other EU Member States, this was quite a large average area; the average area per holding was also similar in Germany (55.8 ha/farm) and Denmark (62.9 ha/farm).

As widely observed across the EU-28, Luxembourg also encountered a decrease in the number of people regularly working on farms, falling by 21% since 2000 to 4 960 workers in 2010. This agricultural workforce represented only 2.1% of the Luxembourgish active population[2] in 2010, one of the lowest proportions among the EU Member States.

As shown in Table 2, the total standard output (SO) of Luxembourgish agricultural holdings was EUR 268 million, an increase of 19% since 2000. Among the other European Member States, Cyprus (EUR 459 million) and Malta (EUR 95 million) had the closest SO values in 2010. The 19% increase was not evenly distributed among all economic size classes of farms, as small and medium-sized holdings – those with a Standard Output of less than EUR 100 000 – together recorded an opposite trend (-14%). In fact growth was seen only in farms with an economic size of at least EUR 100 000; the SO of these farms rose by 27%. These largest farms accounted for 85% of the total Standard Output of Luxembourgish farms in 2010.

In terms of both the number of holdings and the Standard Output, dairy farms were the most common; they accounted for 27% of the country's farm population and 47% of the Standard Output in 2010. As shown in Figure 2, the second highest proportion according to the number of farms was those specialised in cattle-rearing and fattening (18%), followed by vineyard holdings (16%) and those dedicated to sheep, goats and other grazing livestock (12%).

The Utilised Agricultural Area (UAA) is the total area used by a holding, regardless of the type of tenure or whether it is used as a part of common land. Generally, it is taken up by arable land, permanent grassland and meadow, permanent crops and kitchen gardens.

In Luxembourg, the agricultural area consists essentially of arable land and permanent grassland and meadow, as together these two components accounted for 99% of the country’s UAA in 2010, the same proportion as in 2000. Arable land remained quite stable over the years, only increasing by 350 hectares (+0.6%). The area of permanent grassland increased more (+5.1%, a gain of 3 290 ha).

Statistics on livestock use two different units of measurement, the number of head (number of animals) and the livestock units (LSU), the latter of which allows comparison between different types.

According to the Agricultural census 2010, 4 960 people were working on the Luxembourgish farms, a 21% decrease compared with 2000. If the annual work unit (AWU) is used to measure the agricultural labour force, the decrease looks very similar, falling from 4 310 AWU to 3 530 AWU (-18%).

The gender split of sole holders changed slightly, as the proportion of female sole holders increased from 20% in 2000 to 22% in 2010.

In 2010 Luxembourgish agricultural land was mostly (58.5%) farmed by tenants with a further 40.8% farmed by landlords (see Table 6). The remaining 0.7% was managed in partnership by the landlord and the sharecropper under a written or oral share-farming contract.

With 1 460 holdings farming 198 830 cattle, Luxembourg was among the EU Member States with the lowest number of farms with cattle; only Cyprus (280) and Malta (290) had lower values in 2010. The total cattle capacity in housing systems (213 320) slightly exceeded the number of cattle in Luxembourg, explaining why the related percentage was more than 100 (see Table 7).

In Luxembourg, there were 530 holdings with activities other than farm work, directly related to the holding and having an economic impact on the farm in 2010 (see Table 8). Although this was one of the smallest numbers of farms with other gainful activities in the EU-28, the proportion of the farm population was among the highest, with about 24% of all Luxembourgish holdings undertaking other gainful activities.

Only a small proportion of farms (2.7%) in Luxembourg were practising organic farming in 2010, covering 2.6% of the country’s UAA.

Luxembourg has conducted the Farm Structure Survey on a yearly basis since 1953. Both the Service d’Économie Rurale and STATEC, the National Statistical Office, are involved in the data collection, though STATEC is the responsible body.

In compliance with EC Regulation 1166/2008 of 19 November 2008, the target population included all agricultural holdings with at least 3 hectares of UAA or 0.25 hectares of either fresh vegetables, melons and strawberries, or flowers and ornamental plants. Farms with at least 0.30 hectares of fruit and berry plantations, or at least 0.50 hectares of nurseries were also surveyed. Moreover, holdings falling below these thresholds but complying with a set of different physical thresholds, related to certain head of livestock, were also included in the target population.

In Luxembourg common land does not exist.

Information on the location of the farm refers to the municipality and section municipality of the major building (or the largest portion of agricultural area) of the holding.

In Luxembourg, the thresholds used for the FSS 2010 differ from those used in previous waves of the survey. This change did not have a significant effect on the target population, as when the new thresholds are applied to the 2000 dataset, the population of agricultural holdings is underestimated by only 2.8% and only a small portion of UAA is disregarded (0.1%). Nonetheless, for the present article and to compare the FSS 2000 with the Agricultural census 2010, the 2000 dataset was filtered using the same thresholds as in 2010. Therefore, the 2000 figures mentioned within this article and presented in the tables (or available through hyperlinks) differ slightly from the ones presented in the Eurostat online database. Nonetheless, hyperlinks to the online database have been provided throughout the article.