This article is part of a series of country-specific essays on the results of the European Union (EU) Farm structure survey (FSS) 2010. The FSS collects information on the structural characteristics of the agricultural holdings (land use, livestock and labour force) and is carried out by all European Union Member States every 10 years as an Agricultural census, with two or three additional, intermediate sample surveys carried out in-between. The present analysis of the farm structure includes a comparison with the FSS 2003, the first Agricultural census carried out in Lithuania after the re-establishment of the independence. 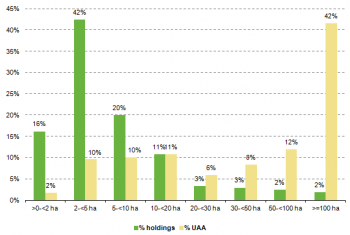 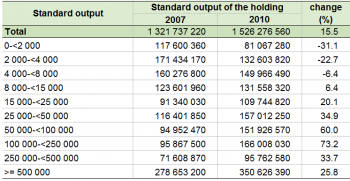 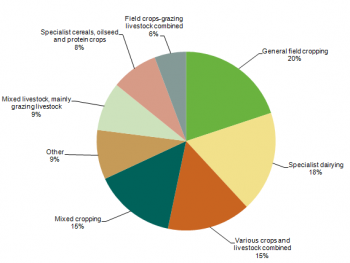 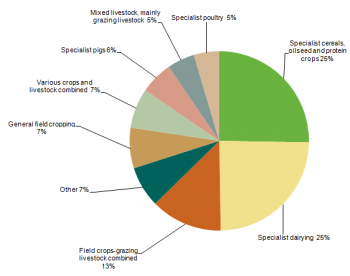 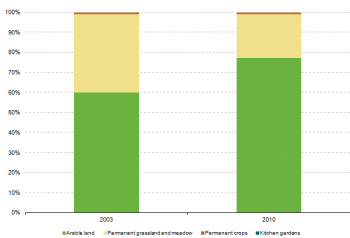 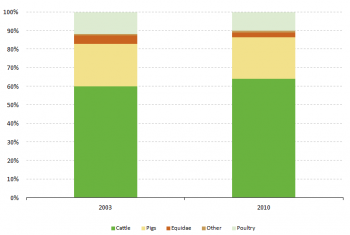 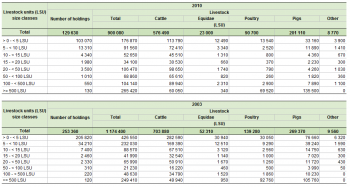 During the 2003-2010 timeframe, roughly one in four agricultural holdings closed down in Lithuania. Accordingly, as exhibited in Table 1, the number of farms decreased from 272 110 to 199 910.

Furthermore, figures on the labour force displayed a similar tendency, as the number of people regularly working on farms dropped by 32 %: from 539 950 in 2003 to 366 090 in 2010. Nonetheless, the number of people employed in the agricultural sector still represented a considerable share of the active population in Lithuania (22.5 %).[1]

According to the FSS 2010 data, in Lithuania there were 0.82 hectares of UAA on average per inhabitant. This value represented an increase of 14.5 % if compared to the figure recorded in 2003 - due to a simultaneous fall in the population and a grow in the UAA - and is one of the highest in the EU, also the highest among the Baltic countries.

In 2010, the majority of the agricultural holdings (58 %) were found to have less than 5 hectares of UAA in Lithuania (see Figure 1). The farms whose UAA ranged from 2 ha to 4.9 ha were the most common, accounting for 42 % of all the Lithuanian agricultural holdings. In terms of the agricultural area though, these farms accounted for a minor share: 12 % of the UAA of the country. On the contrary, most of the UAA of Lithuania (54 %) was found to belong to a small number of bigger farms (4 %), i.e. those with 50 hectares or more of UAA.

When comparing the FSS 2003 data with the FSS 2010 data, a general decrease in both the number of holdings and the hectares of UAA could be observed in most of the size classes of farms. In particular, figures fell for all the small and medium sized holdings – the ones whose UAA ranged from less than 2 hectares to 29.9 ha. On the other hand, values for holdings with 30 or more hectares of UAA increased substantially, thus confirming the tendency for the bigger farms to absorb the smaller ones.

The highest increase was recorded for the largest agricultural holdings, those with 100 hectares or more of UAA. Over the 2003-2010 timeframe, their UAA increased by 75 % while their number rose by 84 %. Conversely, the sharpest decrease was registered for those farms whose UAA ranged from 2 ha to 4.9 ha: -37 % in terms of both UAA and the number of holdings.

In terms of the standard output (SO), the economic size of all Lithuanian agricultural holdings was EUR 1 526 million in 2010. This value, calculated by adding all the standard output per hectare of crop and per head of livestock in a farm, was by far the highest among the Baltic countries.

In 2010, roughly one fourth of all the SO of Lithuania was produced by farms with EUR 500 000 of SO or more. A very similar share was recorded for the farms with less than EUR 8 000 of SO.

In terms of the economic size, the hierarchy of the holdings looked different, as showed in Figure 3. When using the SO for measuring the main type of farming, one fourth of the total SO of Lithuania appeared to come from farms specialised in cereals, oilseed and protein crops. A very similar share was reported for holdings specialised in dairy farming. Farms specialised in crop-grazing livestock combined appeared to account for the only other double-digit percentage (13 %).

The utilised agricultural area (UAA) is the total area taken up by arable land, permanent grassland and meadow, as well as permanent crops and kitchen gardens used by the holdings, regardless of the type of tenure or of whether it is used as a part of common land.

Although the area of permanent grassland and meadows is still highly important in Lithuania, it decreased by 38 % over the 2003-2010 timeframe. Consequently, it accounted for 22.1 % of the UAA in 2010 (605 870 hectares). In 2010, almost all permanent grassland and meadow was found to be dedicated to permanent pasture (19.5 % of the UAA), while a small percentage (2.6 %) was recorded as not used for production or eligible for subsidies – generally, this was land used for keeping the soil in good agricultural and environmental condition (GAEC).

According to the 2010 data, there were 0.27 Livestock Unit (LSU) per inhabitant in Lithuania. In 2003 there were 0.34, since the number of LSU decreased faster than the population during the timeframe considered.

By far cattle are the most import livestock in Lithuania: in 2010 they represented 64 % of the whole livestock population. According to the FSS 2010 data, the second highest share of livestock was represented by pigs (22 %), with the third being the poultry (10 %). Less important in relative terms, the equidae (3 %) was the livestock that decreased the most over the 2003-2010 timeframe (-56 %).

In what concerns sole holders and gender distinction, figures appear to decline equally for both gender classes (-32 %); hence the relative share of male and female sole holders did not change over the time considered.

Among the Baltic countries, Lithuania showed the highest figures in terms of animal housing. According to the FSS 2010 data, there were 93 050 holdings rising 739 090 heads of cattle. The results of the Survey on the agricultural production methods (SAPM) carried out in parallel with the census showed that her were around 825 000 places for cattle on Lithuanian farms, a capacity higher than the heads of cattle actually recorded in the country.

The vast majority of housing places were found to be recorded under the ‘other’ category (374 410), while the second most common type of housing was the one where animals are stanchion tied stable with solid dung and liquid manure (291 240 places). Furthermore, loose housing with solid dung and liquid manure was recorded as the third most common type of housing (87 530), accounting for 12 % of heads of cattle (see Table 7). The other kind of loose housing, where the animals are allowed to move more freely, accounted for 6 % of the total heads of cattle, while the values related to the housing where cattle are stanchion tied stable with slurry were found to be secondary.

In Lithuania, only a marginal number of farms (1 510) were found to have other gainful activities in 2010. Representing a minor share of the whole population of agricultural holdings (0.8 %), these farms recorded activities other than farm work, directly related to the holding and having an economic impact on the holding.

The Agricultural census 2010 was carried out by Statistics Lithuania according to the European Union regulation and the national acts. Statistics Lithuania was responsible for the methodological, technical and organisational preparation of the census; data were collected with the help of five regional statistical offices.

In Lithuania, the Agricultural census 2010 was the second Agricultural census to be carried out after the restoration of independence – the first one was conducted in 2003. Afterwards, two sample farm structure surveys (FSS) followed in 2005 and 2007.

In Lithuania, data on agricultural production methods and other gainful activities were collected exhaustively together with the census. Accordingly, the SAPM was not conducted as a sample survey but as a full-scale survey.

Data for the Agricultural census 2010 were mostly recorded as of the 1st June 2010, whereas the reference period for the SAPM and the information on other gainful activities was the timeframe between the 1st of June 2009 and the 31st of May 2010. This timeframe applied also to data on the Farm labour force.

In Lithuania, all agricultural holdings growing crops or housing animals were interviewed. Nonetheless, small farms with less than 1 hectares of utilised agricultural area and income lower than LTL 5 000 – approximately EUR 1 448 – were excluded from the Agricultural census and were surveyed only for national purposes.

In Lithuania, Common land is a non-existent characteristic.

Since only partial information could be drawn from administrative sources to identify the locations of the farms, two ad hoc questions were added in the questionnaires in Lithuania. Subsequently, the coordinates of the geographic centre of the villages where the holdings were found were used to locate the farms.

From FSS 2007 onwards, the standard output (SO), a new classification of the economic size of the holding, is used. The SO replaced the standard gross margin (SGM) used before. Nonetheless, for comparability reasons, for FSS 2007 both classifications are available.

Due to its meteorological conditions characterised by optimal humidity, irrigation was found to be a secondary issue in Lithuania. Indeed, pilot studies proved that only a few farms (about 0.01 % of all the agricultural holdings) have irrigated area in the country.