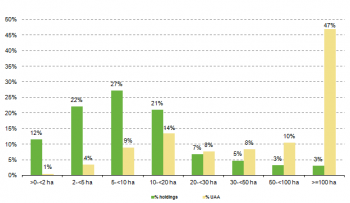 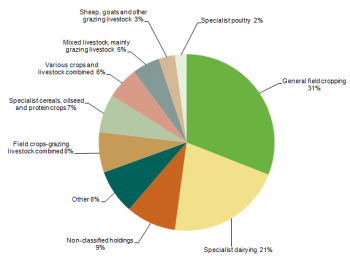 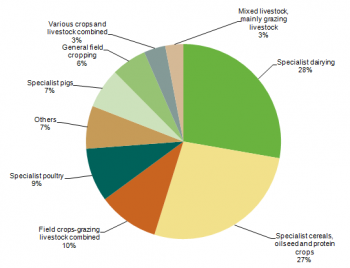 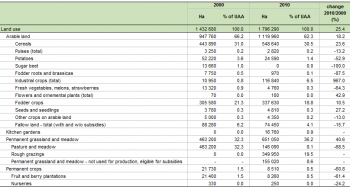 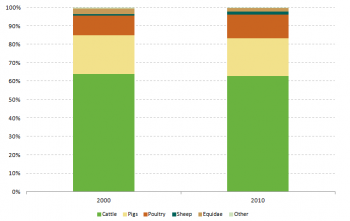 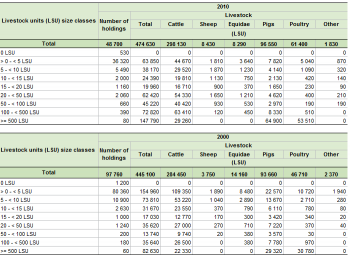 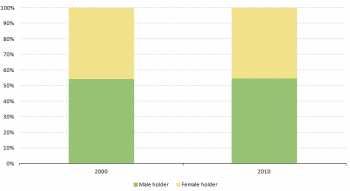 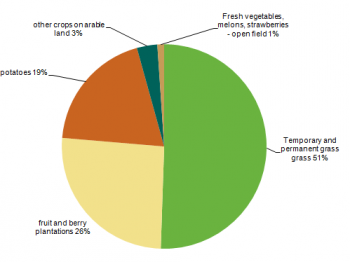 Table 7: Number of holdings with cattle and places by type of animal, Latvia, 2010
Source: Eurostat (ef_pmhouscatlaa) 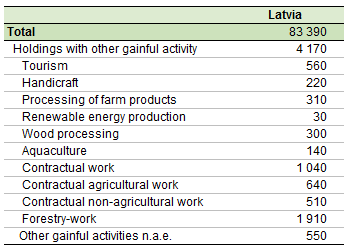 According to the FSS 2010 data, in Latvia the utilised agricultural area (UAA) represented roughly 28 % of the whole territory and it covered 1 796 290 hectares (see Table 1): after 2000, an increase of 25 % in the UAA was reported. The growth of the cultivated agricultural area was the outcome of a more intensive use of land for agricultural production, the introduction of a land reform and the implementation of support payment programmes which followed Latvia's accession to the EU. As a consequence, in Latvia the average size of the agricultural holdings doubled, growing from 10.2 ha in 2000 to 21.5 ha in 2010.

In terms of animal livestock expressed in livestock units (LSU), an increase of almost 7 % compared to 2010 was observed, amounting to 474 630 LSU.

Considering the overall increase of the UAA in Latvia, the ratio per inhabitant has increased as well: in 2010 there were 0.8 hectares of UAA on average per inhabitant, a 33 % increase compared to the 2000 figure, one of the highest recorded within the EU-27.

Most agricultural holdings have less than 20 hectares in Latvia. According to the FSS 2010 data, 82 % of them had less than 20 ha of UAA and accounted for 27 % of the UAA of the whole country (Figure 1). In contrast, the majority (57 %) of the total UAA belonged to a small percentage of agricultural holdings (6 %) with a size of 50 hectares or more. Land ownership went through many changes due to political changes after the independence and also to the effects of the CAP.[2]

In terms of the main area of production, holdings specialised in general field cropping represented the largest category in Latvia, according to the Agricultural census 2010, with a share of 31 % of the total number of holdings (see Figure 2). The farms classified as specialised in dairy farming accounted for 21 %, while those focusing on field crops-grazing and livestock combined contributed another 8 %, a share slightly higher than the one of the farms specialised in cereals, oilseed and protein crops (7 %) and the one of holdings producing various crops and livestock combined (6 %).

The image drawn in Figure 2 changes when ranking in terms of the economic size is made (see Figure 3). Indeed, when using the SO as a criterion 28 % of the total SO generated by all Latvian farms came from dairy farming in 2010. Agricultural holdings whose production was focused on cereals, oilseed and protein crops contributed a similar share (27 %). The contribution of those specialised in field crops-grazing livestock combined was 10 % of the total SO of the Latvian agricultural holdings, whereas farms specialised in poultry accounted for 9 %.

The utilised agricultural area (UAA) is the total area taken up by arable land, permanent grassland and meadow, as well as permanent crops and kitchen gardens used by the holdings, regardless of the type of tenure or whether it is used as a part of common land.

Between 2000 and 2010 the area of permanent grassland and meadows grew by almost 41 %: from 463 200 ha to 651 050 ha. The area dedicated to pasture and meadows dropped by 68 %. In contrast, due to methodological reasons, the land dedicated to rough grazing as well as the permanent grassland and meadows not used for production and eligible for subsidies grew largely in absolute terms: + 349 950 ha the former, + 155 020 ha the latter.

Of lesser importance for Latvia, the area under permanent crops recorded a sharp downturn - from 21 730 ha in 2000 to only 8 510 ha in 2010 (-61 %). In compliance with the EU definition, the area of permanent crops includes only new producing commercial orchards, as the area of fruit trees and berry bushes for own consumption is included in the kitchen gardens. In Latvia, during the last years non yielding orchards have been liquidated.

Statistics on livestock use two different units of measurement: the number of heads (number of animals) and the livestock units (LSU), the latter allowing comparison between the different types.

Table 4 further shows that the number of agricultural holdings with livestock halved over the 2000-2010 period (from 97 760 to 48 700), suffering a decrease even sharper than the one displayed by the total number of farms (-40.8%). Far from being evenly distributed, this decrease affected the smaller holdings rather than the larger ones. According to the FSS 2010 data, the farms with no LSU dropped by 56 %; the decrease for the agricultural holdings with less than 5 LSU and those with more than 5 and less than 10 LSU was only marginally smaller (-55 % and -50% respectively). The number of holdings with more than 10 and less than 15 LSU fell by 24 %.

Considering the prevailing climatic conditions, irrigation is a lesser issue in Latvia: in 2010, there were 1 140 hectares of irrigable area in Latvia, a substantial increase in relative terms as only 560 ha were registered in 2000. Over the total irrigable area, 710 hectares were irrigated at least once a year.

According to the 2010 data, temporary and permanent grass made up 51 % of the total irrigated area of the country. Fruit and berry plantations were the second most irrigated crop (26 %), followed by potatoes (19 %).

In 2010, 72 970 cubic metres of water were used for irrigation in Latvia – excluding the water used for kitchen gardens. It must be noted that this is an estimate which takes into account several factors and was calculated for the first time within the 2010 FSS.

The FSS 2010 data revealed that 35 100 holdings raised 394 340 heads of cattle in Latvia; among these holdings only 6 980 had at least 10 heads of cattle. In the case of the Survey on agricultural production methods (SAPM), these were the only farms that were included in the survey on the cattle housing and they represented 309 670 heads of cattle.

As exhibited in Table 8, the Agricultural census 2010 data show that 5% of all Latvian holdings (4 170) have other gainful activities. Representing a small share of the whole population of agricultural holdings, these farms recorded activities other than farm work, directly related to the holding and having an economic impact on the farm.

In Latvia, organic farming is a rather new agricultural practice; it has been gradually introduced since 1999, when the first certificates on organic farming were issued. It must be noted that the 2000 and 2010 data on organic farms are not comparable because different definitions were employed in the two reference years: for this reason information on 2000 is excluded from Table 9. Indeed, within the framework of the Agricultural Census 2000, the term ‘organic farm’ covered all agricultural holdings producing agricultural goods with no use of chemical protection products and fertilisers, regardless whether they had received the organic farming certificate or not. Thus, in compliance with the data of the certification institutions, in 2000 there were only 28 certified organic holdings, 17 of which had received certificates meeting the EU requirements. After the EU accession, organic farming has rapidly developed in Latvia and, starting from 2007, a stable increase in the area has been observed. Moreover, in 2006 Latvia introduced the Organic Farming Register. Until then there had only been a database managed by the certification institutions, and this database included only information on enterprises that had received organic farming certificate.

The reference period of the Agricultural Census 2010 and the SAPM was the 1st July 2010. Nonetheless, depending on the information to be obtained, it varied so that for:

In Latvia, the list of holdings included in the Census was designed using the Statistical Farm Register (SFR), which was developed in the CSB in 1999 and is updated on a regular basis.

In Latvia, Common land existed in 1990s: it was land belonging to local municipalities. Since 2000, all such land has been leased out to several agricultural holdings, therefore in the Agricultural census 2010 it is regarded as land used by the holding. Thus, in the FSS 2010 it is treated as “agricultural area utilised for farming by tenant”.

In the past surveys, the location of the agricultural holdings was recorded by registering their address, geographical coordinates of the main production site were not determined. Therefore, in the Agricultural census 2010 the cadastre number of the most significant land parcel had to be indicated in the questionnaire in order to determine the main production site of the agricultural holding, which does not always correspond to the address.

To ensure individual data protection, the geographical coordinates of the agricultural holdings main location were rounded to 5 minutes (5’), by using the 5’ grid.

From FSS 2007 onward, the standard output, a new classification of the economic size of the holding, has been implemented. The SO has replaced the standard gross margin (SGM) used before. Nonetheless, for comparability reasons, in FSS 2007 both classifications are available.

In Latvia, the irrigated areas in open field are rather small (904 ha or 0.05% of utilised agricultural area) and irrigation is irregular.

To find out the volume of water used for irrigation, a methodology was worked out in cooperation with the Latvia University of Agriculture Agency, “Research Institute of Water and Land Management”.

Use of administrative data sources

Two administrative sources were used to collect information for the Agricultural census 2010 and the SAPM: the Animal Register and the Integrated Administration and Control System.

The Organic farm register was used for quality control and data comparison at holding level.

A detailed list of all the characteristics concerned is available in the National Methodological Report.

Some of the characteristics detailed in the EU regulation 1166/2008 were not included in the Agricultural census 2010, because they were nonexistent or non significant in Latvia. These characteristics are listed in the National Methodological report 2010.