This article is part of a series of country-specific essays on the results of the European Union (EU) Farm structure survey (FSS) 2010. The FSS collects information on the structural characteristics of the agricultural holdings (land use, livestock and labour force) and is carried out by all European Union Member States every 10 years as an Agricultural census, with two or three additional, intermediate sample surveys carried out in-between.

The present analysis of the farm structure includes a comparison with the Agricultural census 2000, the first one conducted in Hungary in compliance with the EU regulations. In contrast with the FSS 2010, the Agricultural census 2000 in Hungary did not include information on common land. In order to allow comparison between the two reference years, 2010 data presented throughout this article do not include information on common land when the analysis refers to the two waves of the survey. However, data on common land are taken into account when the analysis focuses on the most recent data set. Furthermore, 2003 sample survey data is used when comparing numbers on labour force, as the 2000 data set does not account for all farm ownership statuses. 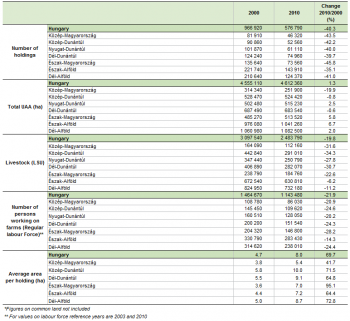 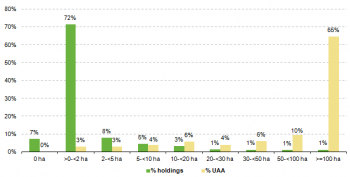 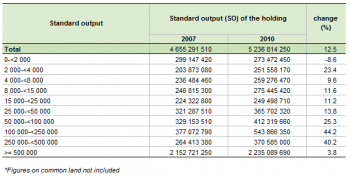 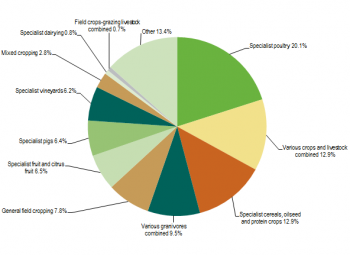 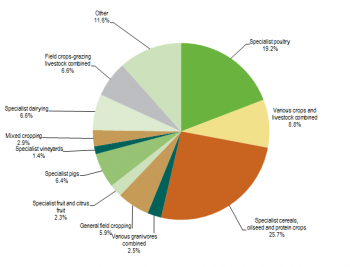 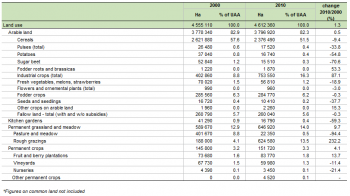 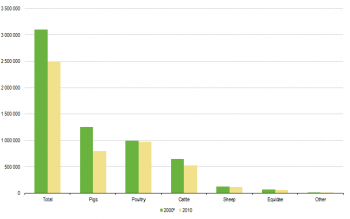 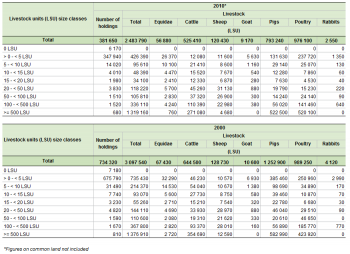 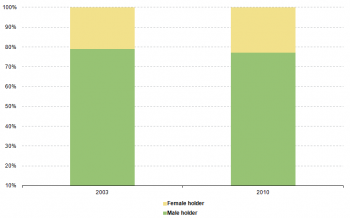 In Hungary, the utilised agricultural area (UAA) slightly increased over the inter-census period (+ 57 250 ha): it covered an area of 4.6 million hectares or about half of the entire Hungarian territory in 2010.

As the number of holdings decreased and the agricultural land increased, the average size of the holdings grew: it almost doubled, from 4.7 ha per farm in 2000 to 8 ha in 2010.

Following a common trend among the survey countries, in Hungary the number of people regularly working on the farm decreased over the period under analysis (-21.9 %): about 1.5 million people were working on the farms in 2003[2], whereas only 1.1 million were left in 2010. However, the agricultural labour force still represented 27 % of the active population[3] in 2010 – one of the highest shares recorded within the EU-27.

The territorial analysis presented in Table 2 reveals the regional characteristics of the Hungarian agriculture and highlights the major role played by the territories of Észak-Alföld and Dél-Alföld. Indeed, the Northern Great Plain (Észak-Alföld) and the Southern Great Plain (Dél-Alföld) scored the highest values for each of the key indicators analysed (number of holdings, total UAA, livestock population and number of persons working on the farms), and together accounted for about 45 % of the country’s agriculture.

On the other hand, the capital region of Közép-Magyarország (Central Hungary), which is also the smallest region in terms of area and by far the most densely populated region, was found to be the region where agriculture is least prevalent.

In terms of livestock – measured in livestock units (LSU) – the region of Dél-Alföld proved to be the most important. In 2010, 732 180 LSU were recorded within its territory, a value which corresponded to about 30 % of the country’s population of farm animals. As exhibited in Table 2, 630 810 LSU were recorded within the territory of Észak-Alföld, a value which accounted for about one quarter of the Hungarian farm animal population in 2010 – the corresponding value was 22 % in 2000.

In terms of the agricultural labour force, the Northern Great Plain (21 %) and the Southern Great Plain (25 %) together accounted for 46 % of the Hungarian regular labour force: about 521 440 people were recorded as working on the farms within their borders in 2010. The region of Dél-Dunántúl (13 %), Észak-Magyarország (13 %), Nyugat-Dunántúl (11 %) and Közép-Dunántúl (10 %) recorded double digit shares, whereas the territory of Közép-Magyarország registered a lower share (7.5 %) in 2010.

This type of polarisation of the agricultural structure has been observed in other eastern European countries and partially derives from the process which took place in the 1990s, when the restoration of the land property to the former owners or a division among the members of the agricultural cooperatives was implemented in many Eastern European Member States (Banski, J.)[4]

As exhibited in Table 3, the economic size of the Hungarian agricultural holdings reached EUR 5 237 million in 2010. In Hungary, the standard output (SO), which is calculated by summing up the standard output per hectare of crop and per head of livestock of the farms, increased by 12.5 % over the 2007-2010 timeframe. An increase was recorded for most classes of farms, with the exception of the smallest one – holdings with less than EUR 2 000 of SO – whose value actually decreased by 8.6 %. On the other side, the highest growth (+44.2 %) was recorded by farms with an economic size of EUR 100 000 to 249 999: their value increased from EUR 377 million in 2007 to 544 million in 2010.

If the number of holdings and the main type of farming are taken into account, the four most common types of holdings in Hungary are (see Figure 2): holdings specialised in poultry, which accounted for 20 % of the total population of farms in 2010; those dedicated to various crops and livestock combined (13 %); the ones specialised in cereal, oilseed and protein crops (13 %); and farms dedicated to various granivores combined (10 %).

As exhibited in Figure 3, the ranking looks different in terms of the economic size, as only two production types scored double digit percentages in 2010: agricultural holdings specialised in cereals, oilseed and protein crops, which accounted for 26 % of the Hungarian SO, and farms dedicated to poultry, which shared 19 %.

The Utilised Agricultural Area (UAA) is the total area used by the farm, regardless of the type of tenure or whether it is used as a part of common land. It includes four major components: arable land, permanent grassland and meadow, permanent crops and kitchen gardens.

As exhibited in Table 4, in 2010 the Hungarian arable land was mainly dedicated to the production of cereals (2.4 million ha), industrial crops (753 550 ha) and fodder crops (284 770 ha); also fallow land recorded remarkable values, as it took up 5.6 % of the country’s agricultural area (260 040 ha). Between the two reference years, the production area of cereals decreased by 245 390 hectares, whereas the cultivation area of industrial crops grew by 350 690 hectares of agricultural land; both fodder crops and the area dedicated to fallow land remained fairly stable.

Over the inter-census time frame, the area of permanent grassland increased by 9.7 %; in absolute terms, it gained 57 250 hectares. Only 3.5 % of the grassland, an area of 22 350 ha, was classified as pastures and meadows, the remaining 624 580 ha are rough grazing areas. These values can not be compared to the FSS 2000 because the classification schemes are not compatible.

Statistics on livestock use two different units of measurement, the number of heads (number of animals) and livestock units (LSU), with the latter allowing comparison between different types of animals.

Although their number almost halved over the inter-census timeframe, holdings with livestock still accounted for 66.2 % of the Hungarian population of farms in 2010: the corresponding share was 75.9 % in 2000.

As exhibited in Table 7, half of the Hungarian agricultural land (2.3 million ha) was farmed by tenants in 2010. This share was lower in the most important agricultural areas of Észak-Alföld (43.2 %) and Dél-Alföld (41.2 %).

On the other hand, about 2 million hectares of Hungarian agricultural land (43.5 %) were farmed by the people who actually owned that land in 2010: the highest shares were recorded in the Northern Great Plain (50.1 %) and the Southern Great Plain (52.9 %).

The land utilised in partnership by the landlord and the sharecropper under a written or oral share-farming contract covered 6.5 %.

In terms of the number of farms, the most common type of animal housing was found to be the one recorded under the general “other” category (9 190 holdings) , followed by tied stables with solid dung and liquid manure, which was recorded in 8 030 holdings.

On the other hand, if the number of places is taken into account, the housing where the animals are free to move with solid dung and liquid manure was the most common (354 620 places). When analysing data on animal housing, it must be noted that holdings could record more than one type of housing.

According to the FSS 2010, there were 47 270 farms with other gainful activities in Hungary. These holdings, which accounted for 8 % of the entire population of farms, registered activities other than farm work, directly related to the holding and having an economic impact on it.

The FSS 2010 allowed respondents to indicate eleven different types of activities; each holding could specify more than one activity. Processing of farm products (26 430 farms) was the most common type of extra activity, followed by contractual work (13 450 farms), unspecified other activities (9 010 farms) and forestry-work (2 580 farms).

The Agricultural Census 2010 was the first one to be conducted after Hungary’s accession to the European Union (2004) and the second one carried out in compliance with the EU legislation. The Hungarian Central Statistical Office was the responsible body.

In Hungary, all agricultural enterprises which carried out activities were surveyed in 2010. In the case of private agricultural holdings, only farms with at least 1 500 square metres of productive land area were included in the census. Moreover, farms falling below this threshold but complying with a set of different physical thresholds (in terms of the area of certain types of crops or heads of cattle) were also included in the target population.

In Hungary, common grassland was not considered as agricultural area until 2007. Thus, information on common land was included for the first time within the context of the FSS 2010: it covered an area of about 74 000 hectares (1.6 % of the Hungarian agricultural area).

In Hungary, information on the location of the farms was obtained through the topographical lot number, the Integrated Administrative Control System (IACS) block identifier of the place where the main agricultural production is carried out, or through the address of the holding.