This article is part of a series of country-specific essays on the results of the European Union (EU) Farm structure survey (FSS) 2010. The FSS collects information on the structural characteristics of agricultural holdings (land use, livestock and labour force) and is carried out by all European Union Member States every 10 years as an Agricultural census, with two or three additional, intermediate sample surveys carried out in-between. The present analysis of Greek farm structure includes a comparison with the Agricultural census 2000. 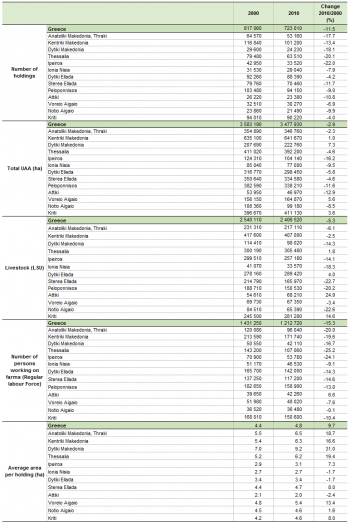 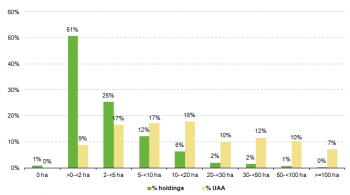 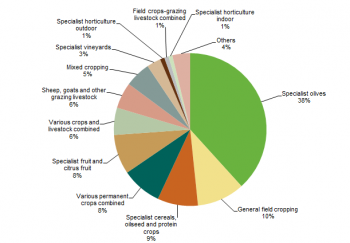 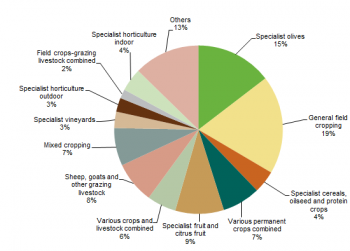 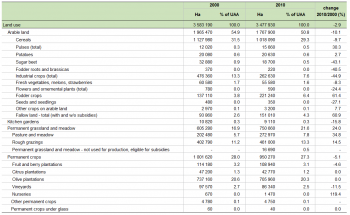 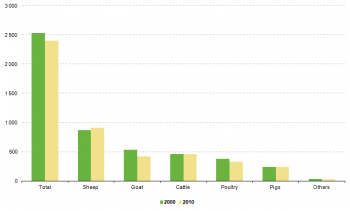 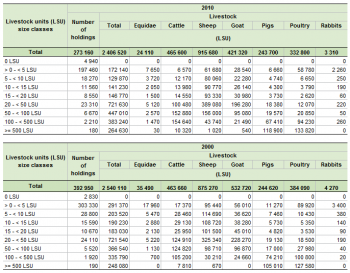 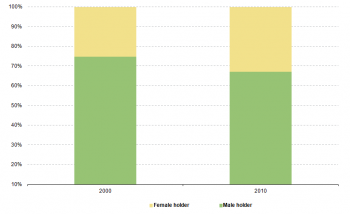 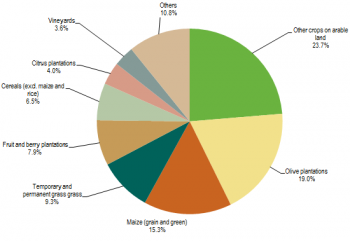 The utilised agricultural area (UAA) also decreased in Greece, though it did so at a lower rate (-2.9%) and stood at 3.5 million hectares in 2010, covering about a quarter of Greek territory. The Czech Republic (3.5 million ha) and Sweden (3.1 million ha) had similar UAAs.

As the fall in the number of holdings was sharper than that of the agricultural land area, the average size of holdings rose between the two reference years, from 4.4 to 4.8 hectares per farm. However, Greece was among the EU Member States with the lowest average area per farm, with only Romania (3.4 ha per farm), Cyprus (3.0 ha) and Malta (0.9 ha) having smaller values.

As shown in Table 2, 171 740 people were working on farms in Kentriki Makedonia in 2010, the largest workforce in the country and accounting for 14% of the total labour force. Peloponnisos had the second biggest workforce with 158 900 people (13%), followed by Kriti (150 600 workers) and Dytiki Ellada (142 000 workers), each accounting for 12%. At the other end of the scale, the Aegean island region of Notio Aigaio had the smallest number of workers (36 480 persons) and accounted for only 3.0% of the agricultural labour force.

If the number of farms is taken into account, the size classes do not look so homogeneous, as holdings with less than 2 hectares of agricultural land (373 340) were by far the most common; they accounted for over half of the total. Holdings with 2 to 4.9 hectares (183 820) represented a quarter of Greek farms and holdings with 5 to 9.9 hectares accounted for 12%. In total, farms with less than 10 hectares of agricultural land (644 930 farms) represented 89% of the total number of farms in Greece in 2010.

Among the Greek regions, Kentriki Makedonia had the highest SO (EUR 1 302 million) and accounted for 19% of the country’s total. The second highest was observed in Peloponnisos with EUR 866 million (13%), followed by Dytiki Ellada (EUR 764 million, 11%) and Thessalia (722 million, 11%). At the other end of the scale, the Ionian island region of Ionia Nisia (1.8%) and Aegean island region of Notio Aigaio (2.1%) accounted for the smallest proportions, at EUR 124 million and EUR 144 million respectively.

Farms specialised in specific types of crops were dominant in Greece. As shown in Figure 2, specialist olive farms made up the largest share (38%) of farms in 2010. General field cropping farms accounted for the second largest proportion (10.1%). Farms specialised in cereals, oilseed and protein crops, those with various permanent crops and specialist fruit and citrus fruit farms all accounted for similar proportions (8.4 - 8.6%).

The Utilised Agricultural Area (UAA) is the total area used by a farm, regardless of the type of tenure or whether it is used as a part of common land. It is made up of four major components: arable land, permanent grassland and meadow, permanent crops and kitchen gardens.

Statistics on livestock use two different units of measurement, the number of head (number of animals) and the livestock units (LSU), with the latter allowing comparison between different types.

The number of holdings with livestock decreased by 30% to 273 160 in 2010; about 119 800 farms with animals ceased their activities or sold their livestock between the two reference years. As the fall in the population of livestock farms was sharper than that in the livestock population, the average LSU per farm increased from 6.4 LSU per holding in 2000 to 8.8 in 2010. Livestock farms decreased in numbers across almost all size bands, with only two exceptions: farms with 50 to 99 LSU, which increased by 21%, and holdings with 100 to 499 LSU (+15%).

In Greece, sheep were by far the most common livestock with 915 680 LSU in 2010, an increase of 5.0% from 2000 and representing 38% of the total livestock population. Cattle were the next most common with 465 600 LSU or 19%; their number remained stable over the years. In contrast, goats experienced a sharp fall of 21%, although they remained the third most common livestock type in 2010 with 421 320 LSU, which corresponded to 18% of the total population of farm animals.

In terms of the regional distribution of livestock, the highest number of cattle (140 850 LSU) were observed in Kentriki Makedonia, accounting for 30% of the cattle population. The largest numbers of sheep were registered in Dytiki Ellada (147 880 LSU) and Thessalia (119 730 LSU) with proportions of 16% and 13% respectively of the total sheep population.

Only a small portion of Greek agricultural land (2.5%) was farmed in partnership by the landlord and the sharecropper under a written or oral share-farming contract, covering 88 540 hectares. The largest area farmed like this (25 250 hectares) was in Dytiki Makedonia, 11% of the total UAA in this region.

The largest types of areas irrigated were other crops on arable land and olive plantations at 243 550 hectares (24% of total area irrigated) and 195 580 hectares (19%) respectively, as shown in Figure 7.

In Greece 3 763 cubic metres of water were used per hectare of irrigated land in 2010, calculated using the area irrigated in the 12 months prior to the survey. It must be noted that water used for irrigating kitchen gardens and glasshouse crops is not included. On a regional basis, farms in Notio Aigaio used the most water per hectare (5 765 cubic metres per ha) while holdings in Dytiki Makedonia used the least (2 480 cubic metres per ha).

In Greece, there were 16 790 holdings farming 651 780 cattle in 2010 (see Table 9). The most common type of cattle housing, both in terms of the number of farms and the animal capacity, was that where the animals are tied to their places and the manure is typically removed mechanically as farmyard manure. There were 5 160 holdings with this type of housing (31% of all holdings with cattle) with a total capacity of 218 530 places (34% of the total cattle population).

The second most popular type of animal housing was that where the cattle are allowed to move freely and the manure is removed mechanically as farmyard manure. There were 4 220 holdings with this type (25% of all holdings with cattle) and the total capacity was 194 490 places (30% of the cattle population).

As shown in Table 10, there were 10 450 holdings with other gainful activities in Greece. Across the other EU-28 countries, Slovenia (12 520 farms) had a similar number. These farms, which represented 1.4% of Greek holdings, undertook activities other than farm work, directly related to the holding and having an economic impact on the farm.

Information on other gainful activities was collected for eleven categories and a holding could have more than one activity. Processing of farm products (4 970 farms) was the most common extra source of income in Greece, followed by contractual work, which could take the form of contractual agricultural work (4 490 holdings) and contractual non-agricultural work (300 farms).

In Greece the first Agricultural Census was carried out in 1950 after the Second World War. Between 1966 and 1967, when the country was still an associated member of the EU, Greece also conducted the first sample survey of Agriculture and Livestock holdings. Since its accession to the EU in 1981, Greece has been carrying out the FSS every two years, in compliance with EU regulations. The Hellenic Statistical Authority is the responsible body, which collects data through its regional offices.

In Greece, the SAPM was conducted as a sample survey; a one-stage stratified random sampling method was employed to select 59 967 units. The response rate was 72% (43 110 holdings) and accounted for 6.3% of the entire population of agricultural holdings.

Data on the Agricultural Census 2010 were collected with reference to 1 November 2009. However, information on rural development refers to the three years prior to the reference date, whereas data on production methods, crops and labour force refer to the 1 October 2008 – 30 September 2009 timeframe.

In compliance with Regulation 1166/2008 of 19 November 2008, the FSS 2010 targeted all agricultural holdings with at least 0.1 hectares of agricultural land or 0.05 hectares of glasshouse crops. Moreover, farms complying with a set of physical thresholds related to certain types of livestock were also included in the target population of both the FSS and the SAPM.

In Greece, common land is mainly permanent grassland used as pasture for cattle, sheep and goats. It covered about 1.7 million hectares in 2010.

Information on the geographical location of the agricultural holdings was collected through the geographic coordinates of the central points of the locality where the farm is located.

The volume of water used for irrigation was calculated for the first time in 2010, within the context of the Survey on Agricultural Production Methods. It was estimated taking into account information on land use, crop water needs, irrigation methods as well as meteorological and soil data. The model also made use of the Geographic Information System technology to account for local variations in cropping, soil and climate. In contrast, it did not include the irrigated area of kitchen gardens and greenhouses, which covered about 0.3% of the UAA in 2010.